Taste this hamburger, Mary! One of the movers and shakers of the growing Westchester drag scene, this Hudson Valley-born queen is now becoming a presence right here in NYC. Save your appetite for the juicy Amber Guesa!

Thotyssey: Hello Amber! OMG it’s autumn for realz today, how do you like it?

Amber Guesa: Hey Jim! I can’t believe we’re already down to the last three months of 2019! Time flies when you’re crossdressing! Luckily, it’s my favorite time of year. We can look forward to a holiday every month, and more importantly we won’t sweat through five pairs of tights just getting to the gig every night.

Do you have Halloween looks planned yet?

Yes! I’m not what you would call a spooky queen or a “look” queen; I really tend to stick to the blonde, pink, housewife aesthetic. But I’ve always loved Halloween and dressing up, and love all things spooky and gruesome. So Halloween is my time to put the blonde hair aside and really go out of the box.

October is a busy month, so I have all my looks for the month ready on the rack. I’ll be serving some alien couture, a Drew Barrymore moment, a few other campy tongue-and-cheek ideas, and my main Halloween costume I’m having made by Gigi Cutina is most definitely on the hamburger brand.

Now’s a good time to explain your drag name!

Haha, I get asked this a lot! I’ve always been into the campy side of drag, and the stupid dad jokes / puns. I wanted my name to be food-related because of my background in the industry. I was working on the Apple campus in Austin, Texas, and my coworkers and I came up with “Connie Asada”–y’know, like the street meat. But sadly it was taken, so we came up with the other street meat: the hamburger. I’m not Hispanic, but have been exposed to the culture my whole life, and was obsessed with how their language made hamburger sound sexy: hamburgeusa. So Amber Guesa is the whitest gurl in the Mexican restaurant who says with a big smile “Gracias!”

Tasty! And if they ever open a Hamburger Mary’s in NY, you should be a shoe-in.

The executives will be hearing from my manager!

You’re one of the few queens who works fairly regularly in both Westchester and New York City. Do you notice a huge difference between those audiences?

Absolutely! I started drag in upstate New York, From Poughkeepsie to Albany. Contrary to popular belief, Westchester is not upstate! But the drag in the Hudson Valley and in Westchester is similar, to an extent. By this, I’m referring to the supply and demand. I find that in NYC the drag is very saturated, and you have to work ten times as hard to grow your name and your fanbase.

Now, that’s not to say the performers in upstate and in Westchester are not hard workers. Up and down the Hudson Valley, there are around 20 to 30 established performers putting on shows weekly. They are able to do so because the scene is not that large, and they have developed a loyal fan base. Like Westchester, gay bars don’t last; we have to create those spaces, and are in different venues every month. So the performers in areas where drag isn’t so readily available almost have to work harder to keep the community going. You see, stronger bonds form a bigger sense of belonging. And if the folks who do come to our shows who aren’t regulars, or “in the community”… this is the only drag they’re exposed to other than that one trip they made to Lips for a bachelorette party a couple years ago.

In general, do you experience pushback from your less-illuminated straight audiences in Westchester?

I do find that the audiences here in Westchester are more ignorant when it comes to alternative drag. That’s why I’ve made it a point to bring in new and different drag performers from all over the tri-state area to my shows. I do get the occasional patron who is not into it at all, but I’ve never experienced out right ignorance since I’ve been here. I found the area to be very “live and let live,” and the support we do get is overwhelming.

You have a popular monthly show at The Alamo in Mount Vernon: Fierce Fridays! Tell us  about the history and details of this night.

I am so proud of what Fierce Fridays has become, and how long we have been putting on shows there! So a year ago, my sis Sierra Leone asked all the Westchester gurls if they’d like to host at this bar in Mount Vernon. Now, Mount Vernon is not the first place you’d think of [in regards to] going to a drag show. But Sierra’s sister is a bartender there, and the owners were asking for a new themed night for the bar. Before me, they supposedly had two Brazilian queens putting on shows, but they moved and took the show with them. I took the opportunity, even though it was the first time I was organizing, hosting and putting on a show myself.

The first night we were there, of course, it was dead… but I had my drag mentor Isis Vermouth there with me for support. She was the first person to give me a paid booking back up in Poughkeepsie. Since that night, we have been there for a little over a year now, and have thrown over 25 sickening parties. Every second and fourth Fridays of the month, no cover, and new performers and guest DJ’s every week. 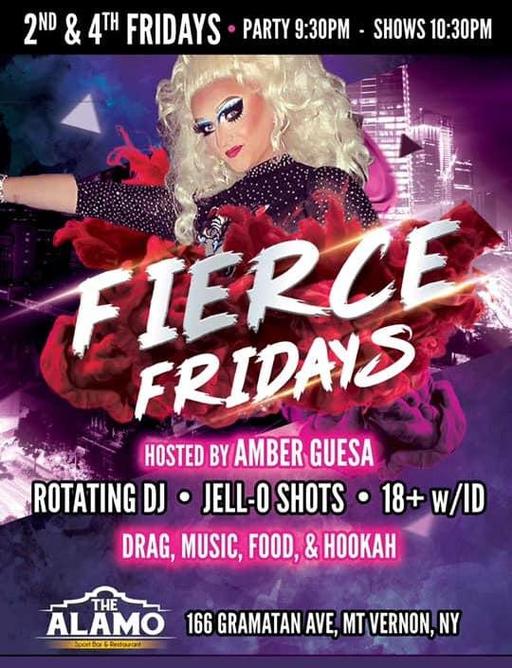 On October 11th, you’ll have the first of two Halloween editions of Fierce Fridays, part one alone featuring a dozen other drag performers. Wow!

Last year for Halloween we had one show, the week before Halloween, with half the cast being from my Hudson Valley family and the other half my Westchester family. There were so many other performers I wanted to come, but there just wasn’t enough space or time to plan two shows. Since I’ve been there a year now, I have a lot more freedom with the shows that I produce, and the people that I book. So for this year, I wanted to have two Halloween shows, both with very different casts.

For Halloween Part One, we have one female burlesque dancer Sarah Sinister from Poughkeepsie; three drag kings: Show Ponii from New Paltz, Oliver Herface from Long Island and Lucky Jack Valentine from SUNY Purchase; my favorite nugget, DragKid Katastrophe Jest; and six more performers who break the boundaries of what drag was traditionally, and represents what drag means today. Every gender and orientation will be showcased and celebrated on the stage. All these performers I’ve worked with before, or are a part of my drag family.

The fourth Friday of the month, on October 25! Again, all queens that I have worked with or are a part of my drag family. I have Isis Vermouth, Blair Back, Valkyire Hail, Victoria Precise, Gigi Cutina, Rhoda Rollins Stone, The Countess Mascara, Vidana, Valerie BeDanza, Koko NutWata, She’Knead ThisGig and Crystal Comedowns. [And on that night] through Westchester Medical Center, we will be offering free Rapid HIV Testing, free contraceptives, and information on starting PrEP. 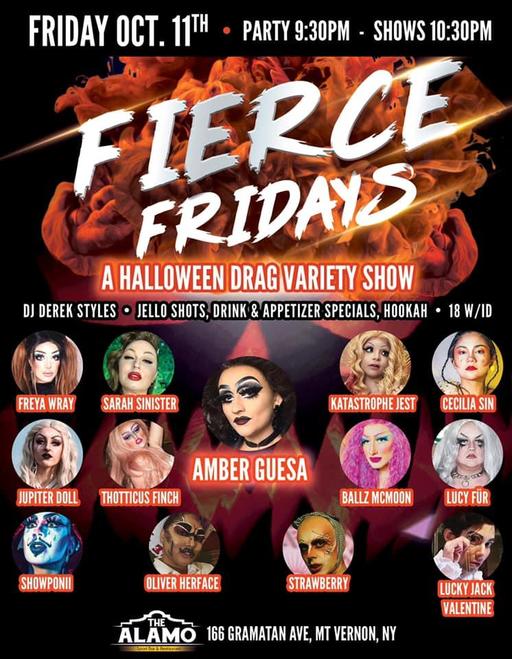 Meanwhile, you’ve recently become a monthly drag brunch hostess at The Liberty in Chelsea. You must have to get up ready damn early to get in drag and make it there.

You haven’t lived life until you’ve traveled 45 minutes on the Metro North, and walked through Grand Central in full drag.

Day drag mass transit realness! How are you liking that gig?

The brunch at The Liberty has been such an honor, and I’m incredibly grateful for the opportunity. My first brunch was on Pride this year! Hosting brunch on World Pride–three years after my own first Pride parade in NYC–was something special! I’m now going onto my fifth brunch there, with reservations every month! This month, I’ll be having Isis Vermouth and Kashi Golean! And my extra special guest next month is Logan Hardcore. 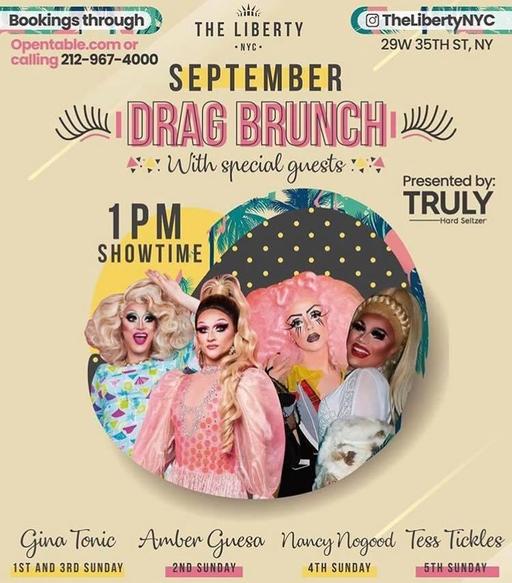 All amazing! Anything else coming up for you?

Oh wow, what do you cook?

Well I graduated from the Culinary Institute of America in Hyde Park, NY, just over two years ago. So my cookbook will be completely hamburger themed: patties, buns, all the fixins’, and stories / photos from my life.

So, Drag Race UK: will you be watching?

I have my top three! Baga Chipz (for obvious reasons), Blu Hydrangea and Sum Tin Wong.

Hmmm. Besides being a 100% Grade-A Beef Bitch, I will do anything for my community, and will always make sure everyone feels welcome and comfortable at my shows.