It’s hard to believe that one so young could have so many years of performing under her belt, but this queen is practically a veteran of the scene. Slender, colorful and tough as nails, this dancing fashionista has been through several incarnations and survived both a tough neighborhood and the chaos that was the last days of Bizarre Buswick, Three cheers for our queen, King Ivy! [Cover photo: Jenny Sharp]

Thotyssey: Hello Ivy! How are you enjoying Halloween Month so far?

King Ivy: Pretty cool. Halloween is my favorite holiday, so just getting ready for that.

Some drag queens are like, “Meh, everyday is Halloween for me.”

True, but Halloween is actually one of the only holidays my mom was able to afford for me and my siblings growing up… so it was something to look forward to.

Where did you grow up?

That was kind of a rough neighborhood back in the day! Or is that an unfair rep?

Nope, it was. It was pretty tough.. but depends on how you took it.

Probably not the easiest place to start doing drag! Were you always into the arts and performing in some way?

To be honest, no. I wasn’t really allowed to do those things. I did used to draw a lot, though. I was more into that, being my only outlet.

How did you discover drag?

At some point, I kinda already knew I was gay and I was attracted to men. But I wasn’t fully out yet. When I would come home and nobody would be home, I would go through my mom’s makeup and outfits–she used to be a stripper. I would try on her costumes and heels, and play with her makeup.

I remember flipping through channels and looking for gay TV shows, and then I found the RuPaul’s Drag Race Season 1 reunion was playing… and I was like, “Oh My God…” It clicked. I didn’t know what drag queens were–I thought you were either trans or a gay man… but this was a new outlet. So I started educating myself; I think I was 12 years-old?

Me and MoMo Shade were actually already friends from 6th grade, and we would talk over the phone a lot about those things. And then her and Aja started going out to Bar-Tini underage, and I wanted to go… but that definitely was not an option.

I do remember when you would all perform at Boots & Saddle, guesting for queens like Yuhua Hamasaki and Misty Meaner. Little did any of us know then that you were all children.

Those were the days! We even used to hang out at Roxy Couture and Tina Burner’s drag competition at POSH every Tuesday.

How do you think you evolved as a queen since those early days?

I’ve grown so much. I think at that time, I had a mindset of what a queen should be, and how they should act, which was creating a character and a narrative for me that was untrue. Now, my drag has evolved to a more authentic version of myself. What you see is what you get. When people come to my shows they’re gonna laugh, have a good time, and party! I like to call my self a club queen, because I am the party. I’m just trying to turn up with everyone.

You started out as Ivy Ferriya, then for a minute you were just Ivy, and now you’re King Ivy! What’s the story behind those name changes?

My biological aunt is a retired faux queen back in Florida, and she helped me pick out my name. And our mindset was, it had to be exotic. So my name was actually gonna be Ivory Ferriya, just trying to be fierce. The first time I performed at [the POSH competition] Trannimal Tuesday, Tina actually introduced me as Ivy Ferriya, and the “Ivy” stuck. After that, I dropped “Ferriya” because to be honest, I don’t know what the hell I was thinking with that name. That’s kinda when my drag started changing and my makeup got more polished, and nobody knew how to pronounce it. So I took it down.

And then the “King” came along because anyone who knew me when I first started knew I was more on the edgy, androgynous style (at times), and still doing edgier things here and there. I got more comfortable in my skin, and more confident in my drag. I was also inspired by Ivy Queen, who is a reggaeton artist from Puerto Rico, and thought about “Ivy King.” But then I thought, it would be way cooler to have King Ivy. Let’s face it, I’m a man in a wig!

Lol! Well now there’s supposedly gonna be some kind of Drag Fans network. I can’t imagine all the shenanigans that the girls will be getting into on there!

Is there really? I have some crazy experiences, especially in drag!

I bet! Does anything come to mind as the craziest?

But, speaking of crazy, you were hosting shows and brunches at Bizarre Bushwick in its last days as a drag venue. Lots of queens, burlesquers and other performers were either deserting or being let go from the venue at that time. The stage acts were almost never paid by the house, and even now after Bizarre has closed, barstaff are suing the owners for unpaid wages. I know some people were giving you a hard time for staying on there while all that was happening. Was that a… well… bizarre chapter for you?

I’m actually glad you asked this. I have some really mixed feelings about this, because I feel like this community is quick to tear each other down rather then uplift them. It was very weird for me, because queens who have never checked in on me before or ever booked me had no problem reaching out to me trying to get me to quit, by telling me things like “I should know better” and “I’m not special.” And then queens who I have never met before or even talked to were talking about me, and telling people I was problematic and flat out were saying they didn’t like me all because I was working at the bar.

The bar itself was cool in the beginning; I had no problem with them. Up until the ending, I was in a weird space. I had just lost contact with my mother around my birthday, and I was on my own all over again… literally sleeping couch to couch. And the bar owners started to act up with my pay, and that’s when I quit before it got worse. Let it be clear: I judge people on how they treat me, and not by how others tell me I should judge them. I never thought I was special to that bar, and already knew what it was. I always proceeded with caution when it came to that bar, and made sure I was getting paid.

As for the queens who helped make it more uncomfortable, I don’t understand where any of the negativity came from when I have always respected everyone and there spaces… but I mean, it is what it is. I’m just leaving it at that.

All fair enough! Okay, on to happier topics… your weekly Wednesday show “The House Down Boots” is currently going strong at 3 Dollar Bill in Brooklyn.

So I actually started “The House Down Boots” at Bizarre as a residency / open stage. When Bizarre closed, the girls that were there who had choreographed numbers and were working their butts off–including myself–were on a little hiatus for two months. But now, we are back at 3 Dollar Bill. It has been going strong for a year now (minus the two month break), and has been one of my favorite shows to do . It is now a weekly show, and the girls who come show the fuck out! I had the pleasure of having tons of queens [and other performers] come through such as Robert Garcia, Jayse Vegas, Novaczar, Olivia Lux, Zavaleta, Miss Fellatia, Godiva Romance, Emerald Phoenix, FvckJuice, Succubus Tony, Detoxx Busti-ae, Iodine Quartz, Sasha Shook, and the list goes on. 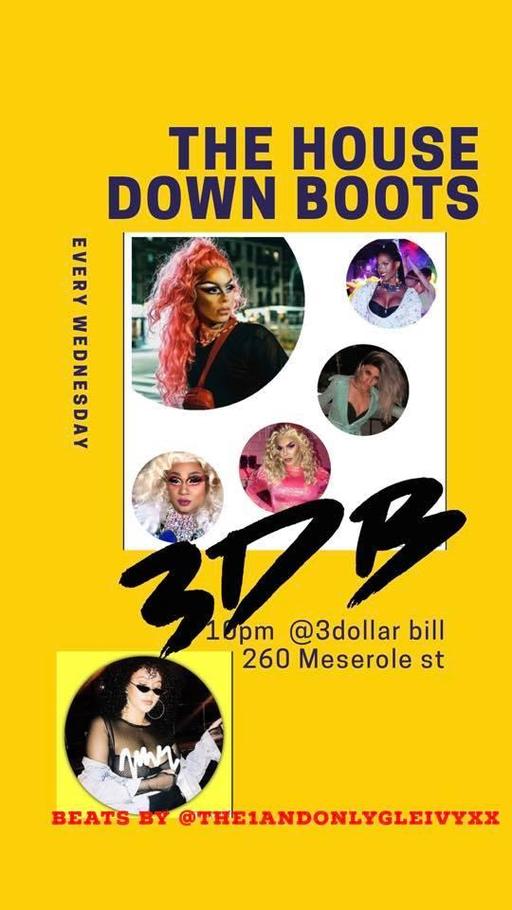 And now you are a brunch queen again, too!

Yes, I honestly don’t know how that happened, lol! I am the biggest, grumpiest person in the morning. But I mean, look at God… everything happens for a reason. The new brunch is going to be every Saturday at a new spot in LIC called Kings. 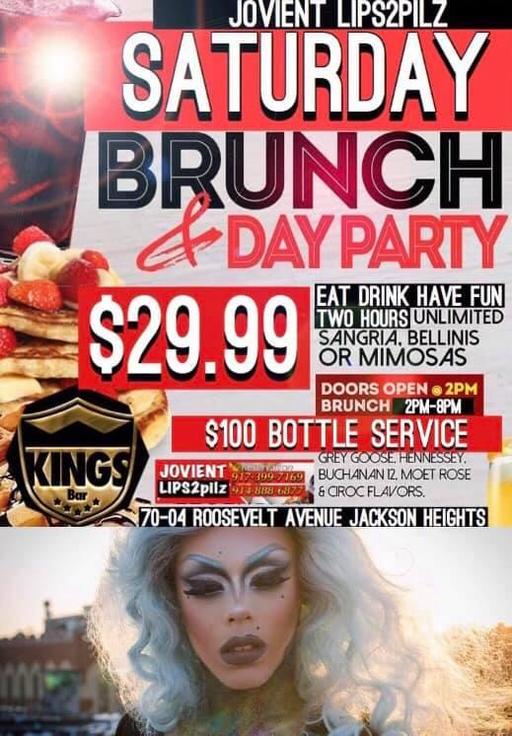 And you recently started a Sunday brunch as well.

“Slay Me Brunch,” that’s every other Sunday at Sall Restaurant in Hell’s Kitchen. 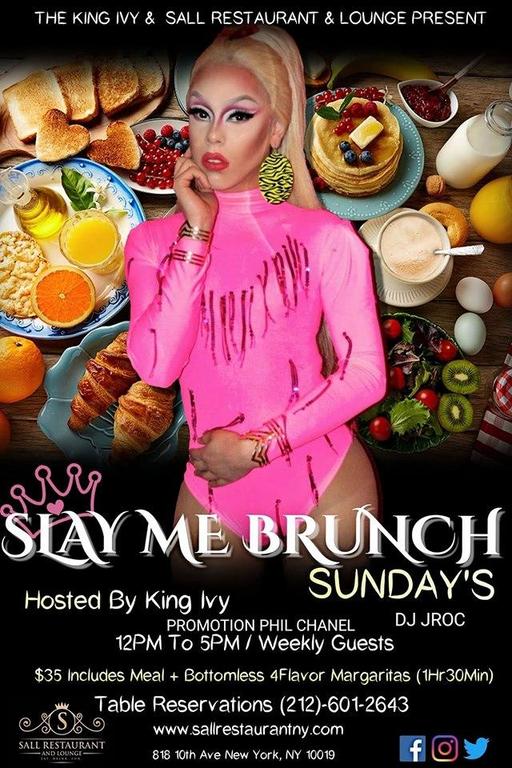 And it looks like you’ll be running between two events on October 26th! Starting with something at The Bad Old Days in Brooklyn, “Bad Old BOO-gie.”

That is produced and hosted by my amazing sister, Allegra Spread! They are like my guardian angel at times. The most professional queen I have ever came across, and so talented! That one is gonna be so much fun. 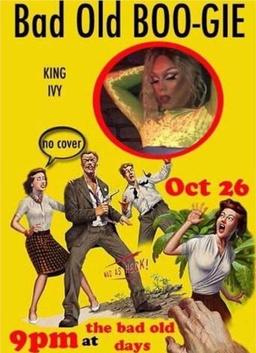 And then later that night, the Caribbean Equality Project’s fifth annual Jumbie Halloween party at Impulse Lounge in Queens.

I’ve been working with Caribbean Equality for some years now! Mohamed is the Beyoncé of the whole thing, and he’s amazing! They’re a non-profit organization that helps LGBTQ people with housing, jobs, and law. They’re amazing. They throw events around the city and do tons of fundraisers and every year. They throw a Halloween party that has been including myself, Sundari and Detoxx Busti-ae. It’s so much fun to see everyone come together, and we have tons of fun. The past two years have been hosted by my girls at Impulse Lounge in Queens, which is one of the few clubs that feature gay nights in South Ozone Park.

What else should we know?

And finally: What’s the best advice you can give a brand new queen on the scene today?

Never change yourself, because there is only one of you. Do you and what makes you happy, and don’t pay none of these bitches no mind! Negativity is disguised by jealousy, and don’t take it too personal.