The latest (last?) member of the Haus of Aja is now part of a new drag supergroup, and becoming a true star in her own right. Take a whiff of the marvelous Janelle No. 5! [Cover photo: dmvrtinez]

Thotyssey: Janelle, hello! Thanks for talking with us!

Janelle No. 5: Hello! I’m honored to be chatting with you, and might I add the constant update for events in New York you promote is so important and kind of you!

Thank you, it’s an addiction! So, Happy Official End of Summer… are you looking forward to the season change?

I personally love fall, but hate winter… so it’s a little bittersweet that the season is over.

Are you excited for Halloween?

Yes… it’s probably the second biggest time of the year for the drags… so yes, very excited!

And I’m guessing you partook in both Bushwig and DragCon?

I sure did! Honestly, I thought this year would be super stressful since both fell on the same weekend… but it was the least stressed out I’ve been in the years I’ve done DragCon. Also, this was my first Bushwig I’ve attended, so it was gaggy!

Excellent! So, lots to talk about… we better start at the beginning! Where are you from originally, and what were your early creative interests that ultimately led to drag?

I am from Brooklyn, New York–Bushwick, to be exact–born and raised. Growing up, I always had an interest in hyper feminine cartoons such as Sailor Moon, etc. Although others saw it as unusual, I got my life and always wanted to be able to emulate that!

Sailor Moon was almost as important as Drag Race in birthing a generation of queens, I’d think.

So true! And as a teen, I spent a lot of time going to Escuelita–not sure if people remember that legendary spot!  A lot of the younger generation don’t really understand how vital Escuelita was; it was one of the only 18+ venues. I remember watching people there like Angela Carrera, Princess Janae, Angel Sheridan–true legends. I was just always so inspired by their beauty and their knowledge of drag; it’s something I always loved.

When did you try drag yourself?

Halloween, like most queens! I was in college at the time, and me and a friend thought it would be such a kiki to get up in drags for Halloween. We went to a thrift store, got cheap costumes, heels, etc. Then we went to the closest CVS, got some makeup and gave it! I mean, it was a mess, from what I remember… but we felt we were giving it to the girls. I doubt we were, though.

I’m sure you were! Were you always Janelle?

Yes! My name was always Janelle. I actually went by Janelle Killz… only a few in Brooklyn remember, lol! I was obsessed with Natalia Kills at the time. Mind you, this was before she ruined her career.

So, by the time you became known as the fifth queen in the Haus of Aja, that group of queens was already very much a Thing, and Aja was a breakout star from RuPaul’s Drag Race. How did you come to know those queens, and ultimately join the Haus?

Me and Aja went to high school together–so I’ve known her for a long time. We actually had a show with MoMo Shade in Forest Hills, Queens, a long time ago at a place called Pride Lounge.

Oh, I certainly remember that place! The owner turned out to be a huge asshole.

Oh yeah, he was a misogynistic douchebag that ended up just turning the place into a straight bar. Shortly after [the show] ended, I stopped doing drag for about four years to focus on my studies. After my long break from drag–and just the entire scene in general–I decided to return.

I believe this was around the time Aja was finished with Season 9. I was able to catch up with Aja and Momo, and just starting getting involved in the scene again… and eventually met Kandy Muse and Dahlia Sin in the process. I developed a good friendship with Kandy, and often went to the gigs and had a great time. Eventually they convinced me to start performing again as a guest at [their show at] Hardware here and there, and I agreed.

So Dahlia eventually decided to move to L.A., and I believe during this time Aja was filming All -Stars 3. When she came back, they were planning this show at Pieces Bar, and Kandy was apparently bringing up the idea of adding a new member to the Haus of Aja. I guess she convinced Aja [to add me] since I was around so much, and she just told me, “your debut as the fifth member is Monday at Pieces, so make an outfit that matches ours and we will reveal it at the end of the show.”

That is when actually Kandy came up with my name Janelle No.5. We felt “Janelle Killz” didn’t fit my persona anymore–and I was the fifth member. And we were obsessed with Scream Queens and the Chanels at the time–oh, and I loved the perfume–so thus, Janelle No. 5 was born.

With everyone being all over the place, I guess all five of you haven’t gotten to perform as a Haus all that much.

We’ve actually never performed as five, ever. During my debut, Dahlia was in L.A. Things just never seemed to come together for some reason. It’s a lot harder to get everyone on one page with so many personalities, etc.

I bet! Well, Dahlia has been in town recently; it must’ve been fun performing with her for a bunch of gigs.

Yes! Actually, since Dahlia has been here… it’s when we finally decided to rebrand ourselves.

Ah, interesting! How so?

We decided it is time to create a new group: myself, Dahlia Sin and Kandy Muse are now the DOLLHAUS. At this moment, Aja is focusing on her music career and touring all over the world, and slaying the girls. We are all so proud of her being authentic to herself, and truly doing what she wants to do.

I notice that MoMo is no longer doing the Monday Pieces show, Queen 4 Queen, with you and Kandy anymore. Is she now doing her own thing as well?

I’m not sure what she is doing, to be honest. We no longer speak to her. But I wish her the best in her endeavors.

Got it! Okay, in general… how have you enjoyed performing weekly at that Pieces show? I know it’s an audience favorite.

Yes! It’s been, like, a year and half since I started here. I’ve learned so much, to be honest, being next to two powerhouses that have been doing drag for a long time. That was a real learning experience. 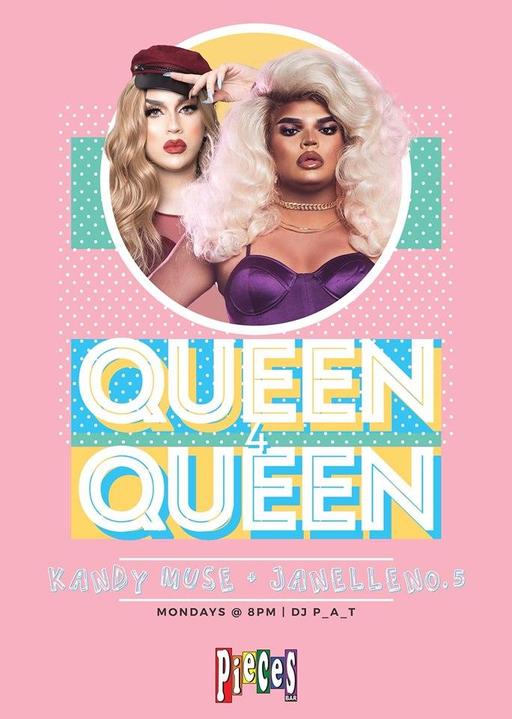 What could folks expect to see from a Janelle performance nowadays?

My drag today is still the initial concept I went for, which was a really glam, curvaceous beauty. People can expect Beauty. I really like the crowd to soak in my look, because I spent some time to get it! But I definitely like to mix it up: sometimes I’m slow and sensual, at times bubbly and funny… and I can definitely break it down when I need to.

And we dare not forget to mention that you were a Cosmo Queen! How did your career change after that happened?

Being a Cosmo Queen was great! I was actually one of the first few non-RuGirls to do it. Shortly after I was able to collaborate with publications such as Vogue, V Magazine and Paper, so it definitely was a great moment that motivated me to continue to work with brands on bigger stuff.

This Thursday at Metropolitan, you, Kandy and her new daughter Xunami–along with DJ P_A_T–are are bringing us Mean Girls. Tell us more!

This is a cute new monthly party we put together! Expect bubblegum bitchiness, shady queens, and cunt numbers. I love working with both Muses, and I’m not sure If I can announce this but… I will be joining the cast of MUSE at No Bar this fall! 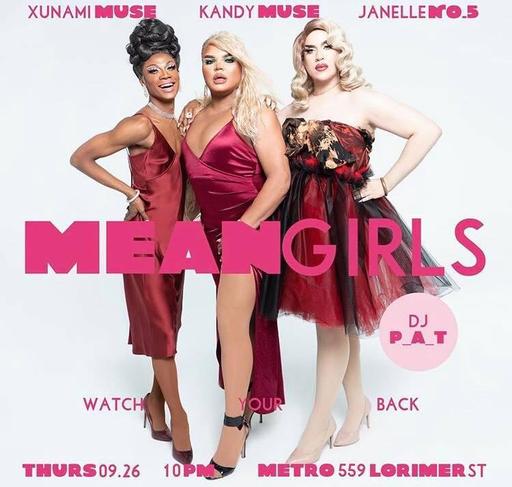 Amazing! Anything else to add?

Catch me every Monday alongside Kandy Muse at Pieces Bar, and our new monthly party Mean Girls at Metro. Also I can’t say to much but… the DOLLS will be traveling soon.

Look out, world! Okay, last question: based on your experiences these past few years, what’s the best piece of advice you can give a brand new queen coming up today?