Coming through as a nightlife host who gives you singing, dancing and fashion without drag is not a well-paved road these days, but young entertainer Marcel is bringing it all back. Conquering open stages all over the city, he’s now about to celebrate a year of hosting Thotyssey’s flagship twice-monthly Thot Mess–as well as his own birthday–at ReBar!

Thotyssey: Hello Marcel! Thanks for talking with us today! Happy almost birthday… what’s on your wishlist?

Marcel: Thank you! Honestly, just to start performing my original material by the end of the year.

I know you’ve always been a singer… have you ever tried to put original songs out into the universe before?

I have worked on original stuff in the past, but this is the first time I will be putting my art fully out there. I’m excited to put stuff out, but I’m not rushing the process.

I’ve known you for a long time… let’s say through the old Boots & Saddle crowd. But tell the children: where are you from, and who / what were you into while growing by way of fashion, music, etc.?

I was born here in New York City, but moved around growing up. When I graduated high school I moved back to NYC. Growing up, I have always been influenced by pop music and pop culture… especially the from the late 90s into the 2000s, and later on exposing myself to 80s music and culture. Madonna, Britney, Gaga and JLo are all iconic entertainers that have inspired and have been influential to me.

You have a pretty good eye and ear for pop… what are the traits that you think are needed to be a huge music star in 2020?

I feel like the music industry has evolved sooo much in the past 20 years. I think social media is a huge platform for an artist to make it big. The general audience wants to engage and feel close to the artist they looked up to, and with platforms like Instagram, YouTube, and Twitter, you can. Also, pop music alone isn’t the forefront of the charts anymore–I feel like the top trending pop records have hip hop and rap influences at this time.

I have found a community from performing in nightlife, and it’s great to see each other support our ventures and projects and give each other a platform. You never forget that you perform because you love it more than anything. It’s not about approval, money, or fitting in. Stay humble and be open to criticism, and keep your happiness first. PS: go light on the drinks ’til after the performance!

Do you think there’s room for other types of nightlife hosts and performers in a city with 7000 drag queens?

Absolutely. I think since drag has been pushed into the mainstream, that it’s made room for new queer performers and personalities of all kinds to bring other types of talent to shine. We’re in a new era of entertainment, and that’s really exciting to see.

By the way, your performance at “Night of 1000 Thots” (the Thotyssey blog’s anniversary show) this past summer at Pieces was so much fun! Wasn’t it great mixing it up with all those different performers?

I was living my best life that night. I felt great energy from everyone, and I thought it was a fabulous show casing of so much talent.

You also have been a regular host of Thot Mess, Thotyssey’s twice a month kiki at Rebar (first and third Thursdays) that features Casa De Galindo in the DJ booth and shows by Foxy Scamazon alongside a new all-star queen each night. This is basically what I live for every month, don’t you agree?

Absolutely! It’s been a blast being able to do Thot Mess for a year now, and I’m looking forward to the future of Thot Mess and the Haus of Thotyssey!

Do you have a favorite moment from Thot Messes Past?

Probably when we had Hibiscus on because, well… Britney, HELLO! Lol.

I did live for that! Well this Thursday marks the FIRST ANNIVERSARY of Thot Mess, and our original queen of the night FiFi DuBois will be back to turn a few numbers. And there’s gonna be a special birthday performance from Marcel! what can we expect?

A great time like always, but with extra shenanigans and tomfoolery, me hitting the Rebar stage for the first time, and hopefully a nip slip from Foxy! And FiFi giving me all the flips and twirls I need in my gay diet! 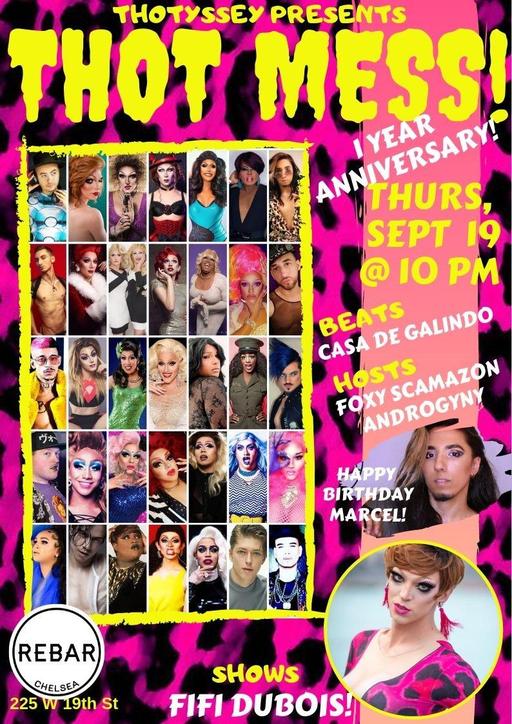 Anything else you want to tell the children?

You can regularly catch my performances at 3 Dollar Bill in Brooklyn on Tuesdays after the 10pm viewing party hosted by Novaczar for Dragula Season 3, and every other Sunday at “Production” hosted by Novaczar and Olivia Lux. And see me hosting regularly living my best life at Thot Mess every first and third Thursday at Rebar. Expect music from me within the next few months, and also expect a produced show by me within the next few months.

Cute! Okay, last question: should Britney be free, or does she need to remain in BritneyJail for her own good?

I have good faith in whatever happens in that situation, but we all need to “LeAvE BriTnEy aLoNe” because that situation is “her prerogative” (hehe see what I did there)! because we don’t need a ’07 repeat.

True that! See you Thursday, gurl!