Yowza, this is a gorgeous queen! From Paris to San Francisco and now a New Yorker at last, makeup artist and drag queen Nicky Doll is set for world domination with high fashion beauty and edgy performances. Nicky chats with Thotyssey about her transcontinental journey, the evolution of French drag, why she isn’t a comedy queen (yet), and more!

Thotyssey: We’re so glad to chat with you today, Nicky! So, you’ve been traveling a bit lately… are you back in New York at this time?

Nicky Doll: Hi! Yes I am back in town. I am based in NYC, but I get to travel a lot through my work–which is always a blessing. I am about to fly to France for a few performances in a few days. I’m glad to chat with you for a bit!

You’re very well-known online and worldwide for your stellar makeup skills, and you’ve hosted several YouTube tutorials. If you could give aspiring queens one single bit of cosmetics advice–like, the most important thing they need to know–what would it be?

Hmmm… I wish my young self would have known that color correcting my beard area before applying my foundation would save me years of struggle, lol! Also, I would tell them to never skip the skincare routine prior applying makeup. An unprepared skin cannot help achieving flawless drag makeup.

Although your live performing is high-energy and popular, do you worry that it gets overshadowed (no pun intended!) by your makeup skills and lewks?

Not at all. I think that if you’ve heard of Nicky Doll through Instagram, you might think that I am ‘just’ a makeup / look queen, but everyone who’s been to my shows knows that I put just as much work into my performances.

You are originally from Marseille, France.

I am indeed, even though I have traveled quite a bit during my childhood. I lived in the French Caribbean island St. Martin, as well as Morocco.

What were your early creative interests and inspirations? And did you receive encouragement and support from your family?

Growing up as a young queer kid while living in Morocco was definitely not easy, which is why I started to find escape into my own fantasy world through poetry, watching anime and video games. I was a huge J-Pop fan growing up. I do have a very supportive mother, but I waited until I was back in France (at 18 years-old) to come out to her.

How was Nicky Doll born, and what inspired your drag name?

Nicky Doll was born in 2009 after having fun exploring gender for awhile, and I decided to try to perform. I wanted a name that describes a very bipolar Barbie doll that has two sides. Nicky Doll is a halfway between the red-light district of Amsterdam and Shibuya in Tokyo: super colorful and fun, but with a very sexual vixen side.

What is the French drag scene like, and how well did you fit in to it?

Believe it or not, the drag scene in France was almost non-existent when I started doing drag. There was no lip sync performances besides old school drag in cabaret (I don’t know if it is a thing in the US, but in France we call them Transformistes which means that each drag builds performances around one Idol that they love to impersonate. Kind of like Chad Michaels and his Cher).

The drag scene in France is much more rooted into the club scene. We used to be paid to create looks matching the party’s theme, and do visual performances on stage. Kind of like very high fashion gogo dancers. Of course, we are now at a post RuPaul’s Drag Race era, and things changed a lot. 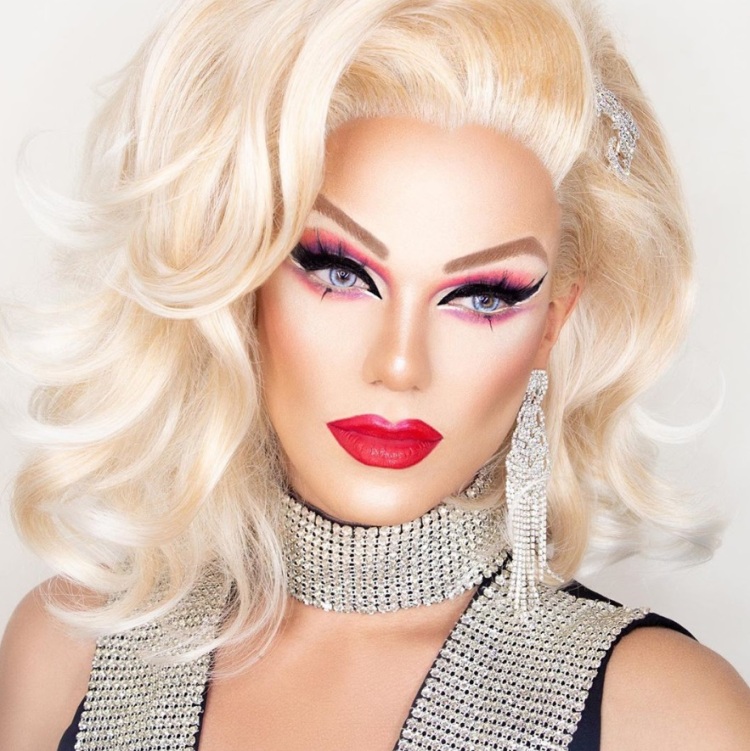 You’re also quite busy in the fashion industry, both behind and in front of the camera. Do you have a preference?

Outside of drag I am a freelance makeup artist, which means that I am always backstage prepping models for photoshoots, runaway or videos. I take fashion and aesthetic in general very seriously. I started shooting in drag by pure coincidence, and ended up really enjoying it. Photography is a powerful art to share emotion and capture beauty, and I’m always very humbled to be in front of the lens.

San Francisco drag can be very outrageous and political. What inspired you to move there and join that scene, and how would you describe your time there?

I actually moved to SF 100% for love. My partner had a job offer there, and because he moved for me to Paris for few years, it seemed fair to do the same for him. So we moved to SF from Paris. It was definitely a challenge, but I had the chance to meet incredible people that welcomed me and introduced me to the drag scene there. It took me a minute to find my niche there because the drag scene there was so different, but I think people were interested to see someone new and different. I keep great memories of it.

And then what prompted you to come do your thing in New York in 2015?

As much as I enjoyed the Bay Area, I needed more. San Francisco is great if you work in Tech, but for a (makeup) artist, it wasn’t fulfilling enough. I wanted to break through the fashion and beauty industry, and NYC was definitely the challenge I was looking for. I never used to play safe in my life, and taking over the Big Apple is probably every makeup artist’s dream. So we packed our bags and moved.

A big party / showcase that you were part of in 2018 was The Dollz Tour, with Erez Ben Ishay and Kimora Blac. How did you enjoy that experience?

The Dollz is a party my friend Erez and I planned on doing for a bit. He came up with the idea to do something that would mix the aesthetic of drag and the circuit music genre together. He asked me to be the face of it, and the rest is history. Kimora joined us later on, which was very fun. We got to travel places together and meet fans from Canada to Portugal. It was great.

While many in NYC have been graced with your tremendous beauty at fashion events and “look queen” soirees like Susanne Bartsch parties, not many have seen you perform. How would you describe a Nicky Doll performance today?

Think of a Pussycat Doll that changes aesthetic and tries to go for a Lady Gaga look. That’s basically what you’ll get 80% of the time, haha! I like to dance, but I like to bring edge and fashion to my looks. I can also go for some avant garde song choices and come up with a concept around it. The only type I have never done yet is the comedy genre–mostly because it requires so many cultural references in order to connect with the American audience I deal with on a daily basis. I don’t feel 100% confident to do that yet. But it’s been only three years that I perform in the US! Who knows what the future has in store for me… and you!

What is a super important fact that the world needs to know about Nicky Doll?

She isn’t going anywhere. She thrived in France, and now is ready to conquer new lands. She is 100% joy, fun and passionate.

And is there anything you want to promote at this time?

I am going on tour in France for two week… so unless you’re in Nice Sept 27th and/or Paris Sept 28th, you will have to wait for me to come back to come see me perform in NYC area!

Do you think Ariana Grande or her “people” have really been stealing looks from Farrah Moan?

Abso-fucking-lutely. Is that a real question!?

Finally: since she shares your namesake, you might have thoughts on whether or not Nicky Minaj is really going to retire from music.

She’ll retire just long enough for people to beg her to come back, and gain back the attention and title of QUEEN that she misses so much. I miss her, though… her album Pink Friday was a very cool album, and actually inspired a lot my early Barbie doll vibes back in the day! Nicky Doll is a Barbz.

One thought on “On Point With: Nicky Doll”