A newer queen who nonetheless has a long history with NYC nightlife is about to make her hosting debut in the city’s most vital venue. Prepare for the Invasion of Polish the Queen winner Molly Whop!

Thotyssey: Molly, hello! So what did you do for Crazy New York Drag Weekend?

Molly Whop: I had a blast at DragCon: shopped on Friday and went in full giesh on Saturday. I love getting to see everyone you don’t always get the chance to on a regular basis. The beats, the outfits and the energy are just everything I wait all year for. The talent level in our community really shows up and shows out for the Con.

I also love interacting with the neighboring conventions. They always give me life, even before I get to DragCon!

Do you consider any specific queens to be role models, or strong influences on own your drag?

While I don’t have a drag mother, an interview I saw with Shea Couleé inspired me to try drag. Once I started preparing and studying the art of drag, I found myself mesmerized by queens like Pixie Aventura, Shuga Cain and Brita Filter. I love a show, a production and a queen that makes you laugh. A queen like Pixie will dance circles around anyone. Shuga Cain constantly shows up with different looks, and she was the first queen I saw where I didn’t know what she was going to do from week to week. I’ve seen her take a milk bath on stage! Brita’s performances feed my funny bone and soul. She gives me everything I want in a drag show.

I also grew up in New York, so watching Kevin Aviance turn the party at the Tunnel, the Lmelight and the Roxy has always stuck with me. She was such a force that demanded attention when she performed–not because she asked for it, but because her art was just that good! And I grew up in a time where RuPaul was still performing at Spa in Union Square on Thursday nights for the kids, so I have been fortunate enough to grow up watching and admiring legends in the game. I like to think my drag is the sum of all of the parts I’ve picked up along the way. 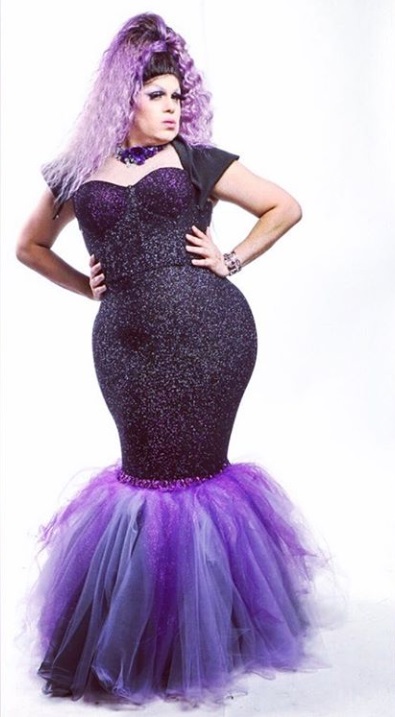 An amazing history! I didn’t know you were a native New Yorker.

Almost. I was born in California, but moved to New York when I was five… so all of my memories are in New York. I spent my childhood in the Boogie Down Bronx, but ended up moving to Brooklyn as a teenager. Since then I’ve repped South Brooklyn, HARD! #fuggetaboutit

Do you have any interest in doing shows in that scene at the Bushwick and Williamsburg bars?

Of course, I want to preform everywhere and I want to see everything! I love Merrie Cherry , the Haus of Aja and Maddelynn Hatter’s entire Haus, just to name a few. I was going to Bushwig before I was going DragCon. I love all drag, and Brooklyn holds it down across the borough. I look forward to the day I have the opportunity to perform in BK! I believe it’s not a matter of if, just when.

How did you ultimately come to start doing drag yourself?

Once I was inspired to try drag, I had a conversation with my partner. Drag isn’t the first thing that comes to people’s minds when they see me as a boy, so he was surprised… but extremely supportive. Not only did he encourage me to try it, he tried it with me. We took about a year to play with makeup and wigs and get the “crunchy phase” out of the way behind closed doors. That Halloween, me and my partner did what I consider “training wheels drag.” We went out as the White Chicks: a paintstick, some lipstick, no pads and no corset. We had a blast just walking around, but that was the most we had done with it.

A few months later, I saw a post for Look Queen preliminary competition for duos. We got our Halloween costumes out, made a mix, and just showed up not knowing what to expect. We won the prelim that night, and we were off and running with it. Look Queen really gave me my start, and a place to work on my character.

And how did your name come to you?

My name comes from the slang term I learned growing up. A mollywhop is when you slap someone with a closed fist. That’s exactly what I want my drag to be.

These days your drag is all about funny, editorial looks that go with equally funny mixes. That’s what you were serving when I first saw you perform, at Lady Libery!

My mixes are like my stepkids, I say I love each of them equally, but I definitely have my favorites. I do a number where I “sing sick,” and that one is my all time favorite. My doll number is also a favorite of mine. Dressing up as Raggedy Ann and performing to “Buttons” by the Pussycat Dolls was a “drag bucket list” item for me. Besides that, I love whenever I get to share the stage with my sister wife, Lolli Gag, which is typically more often than not as we are usually in each other’s numbers. We do a ’90s medley that’s a crowd favorite.

Besides Look Queen and Lady Liberty–and I’m guessing most or all of the competition shows–you did Polish the Queen at Stonewall, which is about to turn two years old!

I love my Polish the Queen family. Phil Chanel has provided a space where all drag is welcome. Everyone from the hosts, FiFi DuBois and Kristy Blaze; to the DJ, Chauncey; to Naomi at the door; to the queens competing are so welcoming and inviting. It really is one big lovefest whenever I’m there!

In fact, you are a recent cycle winner for Polish.

I won the season three finale earlier this year. Since then, there was another cycle and my sis Novaczar is the most recently crowned winner of season four. Season five prelims starts in November, I believe.

Werk. Well, the time has come for your Stonewall Invasion, which is your prize for wining that cycle! It goes down this Sunday… what can we expect?

Foolishness, bafoonery… but above all else, a good time. Expect to laugh, be entertained and be surrounded by good vibes only. I’ve invited a few of my favorite queens to be apart of my special night–all who are making their own stamp and leaving their mark on our community! I’ve been looking forward to this for a long time, and can’t wait for Sunday night! 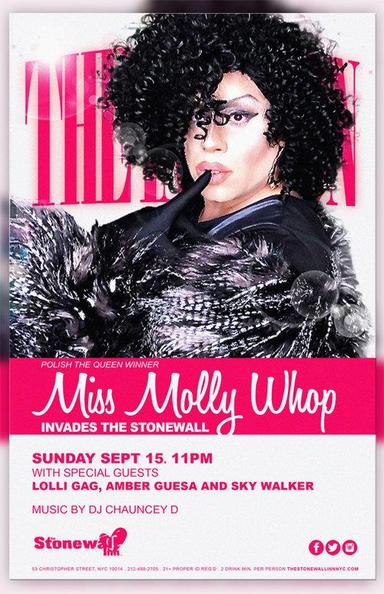 Anything else down the road for you?

I have something I’m working on digitally which I hope will materialize… so people should stay tuned. Till then, I’ll be popping up at Polish, random parties, and looking for my next competition.