Fairly new to drag, this Bronx native brings all types of Charm to her funny performances and stun lewks. And this weekend, she’ll be premiering a new weekly at one of the city’s newest hotspots. Sound the alarm, it’s Boyish Charm! [Cover photo: Carlos Rodrigo]

Thotyssey: Hello Boyish! So, the craziest drag weekend of the year has come and gone. Were you at DragCon, Bushwig or Miss Fire Island?

Boyish Charm: I did DragCon on Saturday and Bushwig on Sunday. Definitely the craziest weekend, but it was so much fun. It was like a drag family reunion, seeing everybody in the same places celebrating all styles of drag.

What was your best experience at each?

At Bushwig, the highlights were 100% Serena Tea (who won Miss Bushwig) and a queen from Canada named Berlin who has become my new obsession after her performance.

How long have you been a queen now?

It’s been about a year and a half. My first time out in drag as Boyish Charm was in February of 2018.

And how did you come up with that name?

I knew I was gonna start drag and didn’t have a name yet, but I wanted a joke name or something stupid and silly. And, I heard someone say the phrase “he’s got a boyish charm” in some movie that I was watching (wish I could remember what movie it was). And I was like, “oh that’s super funny! Let’s go with that.”

I love it! Where are you from originally, and what ultimately led you to drag?

I’m born and raised in The Bronx, so I’m a hometown girl! I’ve always been a performer, and did musical theatre practically my whole life. I remember when I was in high school, I found videos of Coco Peru online, and that was my first real intro to drag. And then of course I discovered Drag Race, and knew immediately that’s what I was meant to do. It’s a way for me to combine everything I love about theatre and performing, and I get to be totally in charge of my own vision… which I love.

I first saw you perform several months ago at Look Queen when it was at Bedlam, and you were already very polished and poised.

You don’t have to lie to me, I was probably a mess… but I appreciate it, haha!

Oh no, total glam! Did you have long practice sessions with your makeup before you finally ventured out the first time?

I actually didn’t. The first few times I went out in drag I had friends help me, but we were all just as clueless about drag makeup… so it was rough. After that, I just learned by doing it and through trial and error. It was rough for a long time, but I loved being able to grow through seeing what other queens would do and taking their advice.

Besides Look Queen, I’m guessing you’ve probably done most or all of the weekly competition shows.

Yeah, I’ve done pretty much all of them, I think.

You did the Ultimate Drag Pageant in January, for one.

I did! That was probably the most rewarding experience I’ve had since I’ve started drag. I had the best time. I went into it looking at it as a learning experience rather than a competition. When the season started, I was still learning who I was as a queen and was still developing my makeup, and basic stuff like that. That completion really helped me find my style with both looks and performances. It also brought such amazing friends into my life, with the girls from my season and past seasons who came to watch. I am so grateful for that whole experience. Marti, if you’re reading this: put me on All-Stars!

Do have you had an overall favorite competition show that you still do?

Drag Wars at Pieces is by far my favorite, and like a second home to me. It was where I did my first ever performance in drag, so they’ve seen me grow and have seen every stage of my drag from the very start. My favorite thing to come from it was definitely being able to compete in Drag Wars All-Stars III this last May! That show challenged me in so many amazing ways and led to so many amazing opportunities.

Yes! I did it after the finale of All-Stars. That was a big honor, because it showed she was proud of me and loved what I brought to the competition, which means a lot.

What’s being a gay–and especially a drag queen–in the Bronx like? I think many folks have a pre-conceived notion that that would be a rough area to be queer in.

Well, personally speaking, I’ve been very lucky to have always been surrounded by people who for the most part have been very supportive and accepting of me… but I know it’s not like that for everyone. The Bronx is a borough that doesn’t have a lot of queer representation (I never knew any out queer people in my area growing up). Therefore, I feel like a lot of people here don’t expand their horizons and can become ignorant towards queer people or anyone who’s different, for that matter. However, I’m making it a mission of mine along with my drag sisters from the Bronx to try and bring drag and gay nightlife to our borough… so hopefully, that helps and gives some representation.

In fact, you’ve been hosting a monthly show up there at Gasolina Bar & Lounge, Charming Sundays.

I have! That happened through a mutual friend, who knew I was looking to start a drag show in the Bronx and brought me to Gasolina to talk them about it… and they said yes immediately. It’s been a lot of fun! We do them monthly, and it’s just a night full of foolishness with me and the Bronx girls. It’s been great to have people who usually don’t go out to see drag come and enjoy it, and become exposed to the art of drag. As expected, it is a bit of a struggle to get the bar full since it is a new thing in the Bronx, but my sisters and I are working out some kinks with it and hopefully it can grow into something really great for our community. The next date hasn’t been officially set, but it will be happening probably at the end of the month or in October!

How did all you Bronx queens find each other?

We all became friends through Drag Wars!

One neighborhood that definitely IS getting queerer by the second is Washington Heights… as exhibited by the success of the new Boxers there. And in fact, you and some of your girls — Jubilee, Blue and Roque — are premiering a new prime time weekly show there this Saturday. Tell us about “Oh Yes!”

We’re super excited to bring something new and fresh to such a popular bar… and it means so much that a well-known establishment like Boxers believes in us enough to give us a weekly show! Every Saturday from 8-10pm, you can catch the four of us giving shows. Our four drag styles are all very different: from comedy, to dancing, to glamour, to spooky. So you’ll be getting all different types of performances in one show. Roqué, Jubilee, Blue and I have become such close friends, and they’re some of the funniest and craziest people I know… along with the fact that they all mega-talented, so I can promise that you’ll be in for a SHOW. It also is super cool for us to have a weekly show at a bar so close to areas we all grew up in, so we feel right at home. 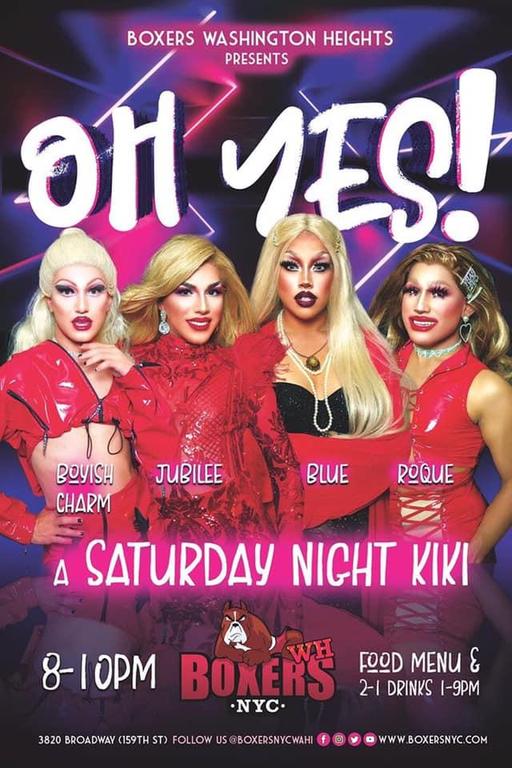 Amazing! Anything else coming up for you?

The “Oh Yes!” group is working on bringing more shows to Uptown / the Bronx, so we have some fun things in the works that will hopefully become official soon. But other than that, I’ll be working the scene and taking gigs as they come!

Amazing! Okay, so in closing: what’s your favorite number to do… and who is one artist you think you’ll never perform?

Well, I’m a comedy queen that does dialogue mixes… and currently my favorite number to do is an “angry grandma mix” I have, with dialogue clips of an old woman complaining about the weather and talking about shitting herself.

I’m not gonna say “never” for any artist because my numbers are so stupid and ridiculous that I’ll use any song to make a joke work… even if it may not fit “drag show” type music. If I had to pick, though… I’d say some super straight people shit, like Ed Sheeran. I don’t see making him into a number anytime soon!