An old school weird queen of the Brooklyn scene, Linda Felcher brings masks, puppets and intergalactic oddity to stages great and small. And with all that she now has in store for us, it’s about time we all got beamed up to her mothership!

Thotyssey: Hello Linda! Thanks for chatting with us! So, it’s September now… are you sad to see summer go?

Linda Felcher:  Its definitely bittersweet. I wish I was able to to get a few more beach days in. but I love the autumn and Halloween time.

Do you have a Halloween look in mind yet?

Several! But I’m keeping them a secret for now.

Understood! To the uninitiated, how would you describe Linda’s drag?

I would say I’m just one of your shapeshifting Brooklyn Cryptids. I like to incorporate sci-fi elements and puppetry into my performances. I can be both glamorous and wretched within the same evening. Very Mask 4 Mask. Literally! A lot of my looks are face obscuring, from masks I’ve made myself. Very high concept, low budget.

Absolutely! Among other things, lol!

Well, that’s a good cue to get to your origin story… where are you from, and what were your early interests that ultimately paved way to drag?

I’m from Massapequa, Long Island. I would say I’ve always been fascinated by drag and elements of drag. From when I was very young, I would always create these different fantastical characters I would pretend to be. Being a kid in the ’90s, I was very aware of drag and drag aesthetics from RuPaul’s breakthrough into the mainstream, and Marilyn Manson’s sacrilegious antics and gender bending.

Performing, though, started when I was at college at SUNY Purchase, where I was an art major and did mainly video and performance art. After moving to Brooklyn four years ago, it just devolved into the persona(s) I perform as now.

That school produced a number of great drag performers! Did you cross paths with any others back then?

Yes! Miz Jade was a year ahead of me; she’s one of the first queens I got to know! Sherry Poppins I got to know a little during our time there, but I don’t think she did drag until after I left. Her and Qhrist With a Q and Maxxx Pleasure… that whole crew of ghouls I didn’t really get to know until a few years later, when when I moved to Brooklyn.

What inspired that move?

In all honesty, depression. After I graduated I was pretty miserable and lost for two years, being stuck at my parents house on Long Island and being isolated from all my friends. I needed to do something about it. So I found a therapist, made a plan, and within a few months I found a place and a job and was making it work. I was pretty inspired by Luwayne Glass aka Dreamcrusher, an amazing performer and noise artist who moved to Brooklyn with a few suitcases and made it work. When I made the leap, I thought to myself, “they are out here making the most if it… I bet I could do it, too.”

What was your first Brooklyn performance?

My first time performing as Linda was in 2016, at a basement show at 49 Shade called “Harsh Noise Beat Face” produced by Reagan Holiday. The show consisted of noise artists and drag performers. I made a complete look out out of clear plastic bags and duct tape. I was giving you the whole Laura Palmer fantasy. I performed a number where I lip synced the Lady in the Radiator’s song from Eraserhead with a Eurythmics dance track, and I ended the number by taping a plastic bag over my head and asphyxiating myself. Don’t try that at home, kids!

You’ve certainly performed quite a bit throughout Brooklyn over the years: festivals, competitions and guest spots. But I don’t recall a full-on Linda Felcher Show (although truthfully, that solo hosting model isn’t common in Brooklyn). Is there something that holds you back from performing more?

Yeah–day jobs and the hustle of New York take a lot of time, energy, and money out of me. Right now, I’m trying to restructure some things in my life so I can on focus on performing more this spooky season (so book me, please). A goal of mine within the next year is to get more financially stable, so I can start producing shows.

It was two years ago when you first participated in the wonderfully inclusive and bizarre drag pageant Mx Nobody, presented by The Nobodies. Last year, you were sashed Mx. Congeniality! How did you enjoy that experience?

Yes, that was the first competition I’ve done… it was great! The Nobodies are so wonderful and supportive of the freaks and weirdos. Every show they put together is wild, and a really good representation of different kinds of drag and performance happening in Brooklyn Nightlife. It was a super encouraging experience, and I made a lot of friends from that whom I’m close with today.

Have you been watching the preliminaries for this year’s season these past few weeks? I hear it’s been crazy!

I’ve been there every week… it certainly has been!

You’ll be in the judge’s seat for the grand finale on Thursday, September 12th! Any idea how that might go down?

Absolute debauchery! Something along the lines of a portal opening up and the whole audience getting sucked into some Hell Dimension by the performances. Just your average Thursday evening in Brooklyn right? 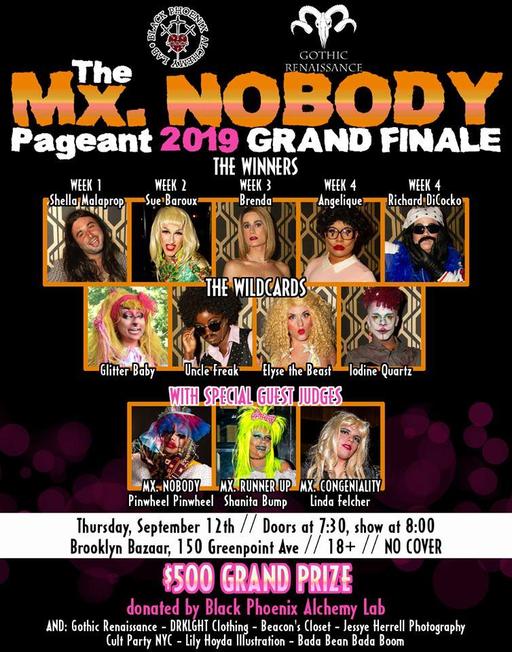 Which brings us to Bushwig! This year’s gonna be the biggest ever, congrats for making the cut!

Thank you! I’m excited, and a little nervous! Each year they always outdo themselves, so I’m excited to see how this year fares. I was so honored to be a part of Yoya the Graceful’s number last year, and meeting performers like Alaska and The Boulet Brothers and many performers I’ve followed on social media. I’m sure this year won’t disappoint.

What can you say about what you will be performing?

My number is a bit of a secret. However I would like to announce that Glitter Baby and Menthol will be joining me on stage. We are on at 4:15 on Sunday, make sure you get your tickets! 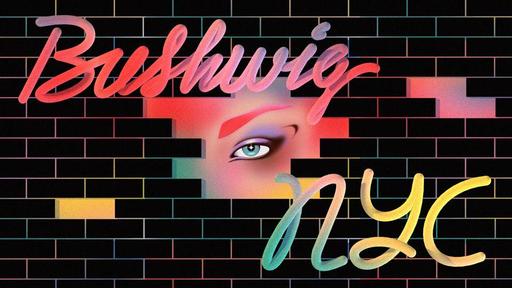 Anything else the children should be looking out for in their Linda Watching?

There are a bunch of projects to be on the lookout for! I’m still working on the details, but I’m going to be involved in a gallery show sometime soon.

Some non-drag performance I’ll be involved with is this experimental vocal project at dieFIRMA in the fall–organized by Allison Halter–which is an offshoot of Xoir (an experimental non-utilitarian vocal ensemble that I’ve been a part of, originally put together by Colin Self and Rene Kladzyk aka Ziemba). I’ll be in one of Jennifer Vanilla’s upcoming music videos, and I’m making some costumes pieces for Vegas Valentine.

For drags, I’m starting to get booked for October gigs already! I’ll be in October’s Str8 to DVD hosted by Sherry Poppins, Qhrist with a Q and DJ Ten Yards. Also, October’s “Hole Pics” put together by MTHR TRSA. I’m considering putting something together myself for Halloween, but I need to work some things out. I want to get booked more this spoopy season, so please reach out! Also, I’ve been getting more into sewing… so if anyone needs help with sewing projects this Hallowed season and has a little extra cash, get at me!

Perfect! Have great gigs! In closing: what (or who) do you think will be the future of Brooklyn’s more avant garde nightlife scene?

It’s hard to say when there are so many amazing performers really pushing their craft. But what I would like to see is more collaboration between the different scenes–not just within the drag spheres, but the music spheres, the alternative comedy spheres. All these networks are already pushing the boundaries of their genre, but I think it’s important to open up that conversation. I see a future that blurs gender and genre. I also see a future where performers work together to make sure we get properly compensated.There are so many amazing shows right now that touch upon what I’m talking about, but one I want to point out is [the monthly show at The Vault] Unforgivable Emotional Carnivore. It’s experimental theater that just happens to star drag performers.