A pioneer of the “RuPaul’s Drag Race” franchise, we barely got to see the fierce and funny Season 2 cast member Nicole Paige Brooks grace our TVs before she has to sashay. But she’s certainly been busy since, having spread much of her southern charm across the globe via live appearances; and in September, she’ll be collaborating with Thotyssey. Let’s catch up with a legend! [Cover photo by Noah Powell]

Thotyssey: Hello, Nicole! Thanks so much for talking to us today! I see you just did a big show in Palm Springs with Morgan McMichaels, Naysha Lopez and many more great queens. How did that go?

Nicole Paige Brooks: I had a great time; it is always nice to work with other girls from the show. We have a bond that is special because we all have been through the same experience.

You’ve probably worked with nearly all the RuGirls at this point.

Being one of the original people on the show, I usually get to perform with the girls as each season comes out. If I have not performed with them because of DragCon, the RuPaul tours that come through town and the finales, I believe I have met the majority of them.

You’re constantly touring and performing. Nowadays, is packing for an out-of-town show super easy, or do you still have to think about what you’ll need and what will travel well?

I’ve been performing for over 25 years, so packing to go anywhere is pretty much the same if I’m going down the street or cross country. I just go down the list: makeup, hair, outfits, shoes.

You were part of the second season cast of RuPaul’s Drag Race, right when the show was starting to get a bigger fanbase. Also, the stakes were a little higher then the first, and the production quality was already much better. Did you feel all that exciting energy when you were filming the show?

During filming, all I was really concerned with was the repercussions my family would have from me doing something crazy or saying something crazy. I truly was unaware of the impact the show was going to have on pop culture. I was just trying not to act a fool, which is probably why I didn’t last long.

Are you disappointed your run on the season was brief, or did it turn out to be a blessing in disguise?

I had never been away from my son at that point, so I was having sleepless nights and anxiety. I was pleased to go home, to be honest.

Is your son a big fan of Nicole?

He never really cared, I don’t think. I always presented Nicole as my job; he knew that everybody knew who he was in the Midtown area where we lived. During Pride, he knew that we were kind of famous in this area. He lives a lot farther away from me now, so I don’t see him as often… which is difficult. But I’m not his biological father, so I don’t really have rights to custody of him.

Do you have sympathy for any of these newer queens on the show that get stuck with all this negative social media stuff… or are they usually guilty of perpetrating it?

I don’t really engage people on social media unless they say something offensive about somebody else on my page. I think it’s a waste of time to argue with invisible people on the internet. I think some queen like the attention, no matter if it’s good or bad.

The only drama I recall with you while you were on the show was that an important photo of yours went mysteriously missing on set.

Yes, when I came into the workroom my picture of [my drag mother] Shawnna Brooks was missing. But I don’t really think one of the girls took it… I kind of think production did it, trying to get a rise out of me. I don’t really know.

Did the show significantly change the way you perform as a drag artist?

I had already been performing for about 15 years, so I had I pretty much established my drag persona well before the show.

What’s your favorite number to perform these days?

My taste in music is always changing. I like country, rock, R&B… I do pretty much everything.

I’ve read that the very first number you ever did in drag was for an AIDS benefit, and you’ve since participated in AIDS Walk Atlanta and several gay men’s health benefits.

I try and do as much charity work as possible. I find it to be a way for me to contribute back to the community that supports me so well.

Are you optimistic that we will see a vaccine or even a cure for HIV in our lifetime?

I am a very hopeful and optimistic person, so I’m hoping there is a resolution to that in my lifetime. 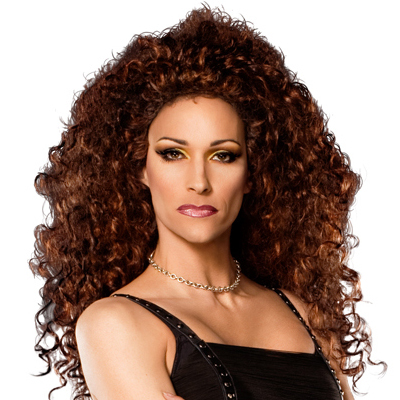 Some people think a drag queen’s job is to distract and help people forget the world’s troubles, but many queens insist on remaining political and truthful in Trump’s America, even at the risk of being divisive. Where do you stand with that?

I usually leave politics out of my performances. But I am a big advocate of voting, protesting and marching in order to get things done.

Is it hard to be a comedy queen in an age of what some might call oversensitivity?

I think you can be funny without being offensive, but there are a lot of jokes that pertained to sensitive matters. I don’t really censor myself when it comes to things like that. If you don’t like my sense of humor, you can just stop listening to me. There is always gonna be somebody that doesn’t get the joke.

For DragCon New York, you will be part of a panel called “Headcount: When Politics Get Personal” which will also feature MILK, and Miss Stonewall 2019 Cissy Walken, among others, moderated by Ivy Bryan.

They asked me to join the panel, I’m assuming, because of my outspokenness about voting and trans rights and gay rights.

DragCon is a lot. And the majority of attendees now reflect the show’s largest current fan demographic: women and young girls. Has that development come as a surprise to you?

Drag Race has definitely changed the demographic for the fanbase of drag. Where it used to be mostly 21 to 45 [year-olds] because those were the people in the audience at the club, it’s now 5 to 80 because of exposure on television. Most girls love all the glamour and makeup and hair, so it’s not a surprise that there’s a large female teenage fan base.

Do you have a favorite New York queen, or a favorite venue here to perform in?

Sasha, of course… and Miss Fame I live for. I hadn’t a really performed a New York, but I’m hoping that changes. I’m excited about where we are working this DragCon… I haven’t been there before.

While in town, you’re gonna be performing at Rockbar NYC for “A Southern Affair” on Saturday, September 7. I’m co-hosting that with Virginia’s Dreama Belle, and besides yourself we’ll have RuGirls Trinity K. Bonet and Jaidynn Diore Fierce… in addition to visiting southern queens and local queens! What are some traits that every good southern queen must have?

I think most southern queens are usually more gentle with their reads then some girls in other regions. A “bless your heart” or “she’s cute” can always mean a little something different with a southern accent on the end. 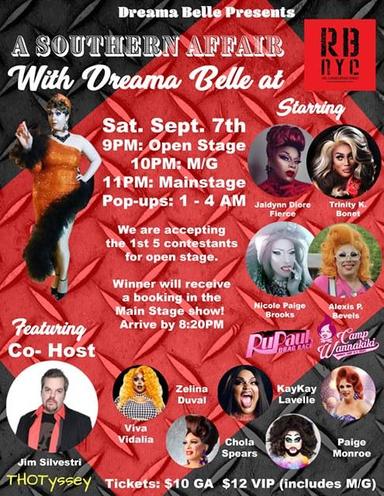 Have a great time here in NYC, and I can’t wait to meet you! Okay, lastly: what does the world need more: a second ABBA cover album from Cher, or the CATS movie?

The ABBA album from Cher is a necessary thing for mankind. CATS… I think it’s for the lesbians.