This delicious drag oddity has made a prominent showcase for herself and many others with Court of Filth Cabaret, now at Rockbar. But there is even more in store for Lady Macncheese!

Thotyssey, Hey, Lady! Thanks for talking to us today! So… it’s nearly DragCon time already! Are you going at all?

Lady Macncheese: I can’t believe it’s almost September already! But no, unfortunately I won’t be at DragCon this year. It ended up being the same weekend as Bushwig this year, so I chose that.

Bushwig is gonna be amazing. I know lots of queens are disappointed they didn’t make the lineup, but every bitch alive wanted to take part this year!

Oh truly. I also didn’t make the lineup this year, but I never remembered to send in a audition video. So I can really only blame myself. Regardless I’ll be there turning looks, and enjoying all the amazing shows.

Although you don’t often perform in Brooklyn, do you consider the scene there to be more of your “tribe” then those other gayborhoods?

Well it is certainly where I found my tribe. Despite living in Queens and mostly performing in Manhattan now, the Brooklyn scene gave me the opportunity to host and produce my first shows. That helped me connect with so many amazing queens, most of which have become like family to me. So I owe a lot to the Brooklyn scene, and I think some of the other gayborhoods aren’t always as welcoming to a bearded queen.

As a queen, what does your beard mean to you?

Less time spent on contouring. lol! I have always loved the idea of breaking down gender roles in any way that I can. Also, drag for me is less about putting on a character and more about presenting a heightened version of myself–so keeping the beard just made sense to me.

Where are you originally from, and how did performing arts (or any arts) originate with you?

[My family] moved around a lot growing up, but most of our time was spent in the Philadelphia area. Growing up, I was always interested in some form of art… whether that was drawing or painting, or making clothes with my grandma. I was always trying to create something. It wasn’t until college that I discovered theatre, and eventually focused on costume design. Which is how I made my way to NYC–working backstage and designing costumes for different shows and events.

And how did you discover drag, and then ultimately give birth to Lady Macncheese?

I think my first introduction was through movies. I grew up watching John Waters / Divine movies, The Rocky Horror Picture Show, To Wong Foo, The Birdcage… things like that. So I think I was around 16, the first time I ever did drag at a friend’s birthday party. Thankfully this was way before social media was a thing, so there’s no photo evidence…  ’cause I’m sure it was tragic. But for years, drag was just a birthday party or Halloween thing for me. It wasn’t until I moved to New York and got more involved in the club scene that I really let Lady Mac out of her cage!

What there some aspect of the food item that actually inspired your drag persona? I mean… what hungry, stoned bitch isn’t inspired by that little blue box?

Haha, right!? I’ve been talking about making costumes out of pasta and noodles for awhile now, but it is surprisingly difficult to make something out of noodles that doesn’t look like a kindergarten art project.

But the name came from when someone I used to work with years ago told me I was like mac and cheese. And when I asked what that meant, he said it was because I made sense to him, and that I was comforting in our work space. So I wanted to bring that to my drag. Especially with my shows–I want it to be a comforting space for every type of performer and audience member.

How would you describe a “typical” Lady Macncheese performance today?

I take a lot of my costume and theatre experience into my performances, so I try to tell a story with my mixes… and there’s usually some reveals or surprises coming.

Oh, by the way… I see that you and and a troupe of queens recently wound up doing a show right in the sand at Riis Beach! How on earth did that go?

Honestly, one of the greatest shows I was ever able to be a part of. Nicky Ottav, Phallic Cunt, Blake Deadly, Xaina X, Kristina Heidiklum and myself got dressed up and took the bus out to Riis. We played our music on a big Bluetooth speaker, and just gave shows in the sand and ocean. I didn’t really know what to expect from the crowd or the lifeguards, but people really enjoyed it. It felt good to do some guerrilla style shows just for fun, and not have to worry about getting paid or any drama, we were just doing it for the experience and it was worth it. Nicky is organizing another one very soon, so I’m very excited to do it again.

Tell us who EZ Mac is.

I call EZ Mac my daughter / sister… because I may have brought her into the drag world and taught her about makeup and looks and queer history, but she has also been such an amazing support to me with all of my NYC drag adventures. She is also an amazing co-host at our show, the Court of Filth.

And how did that show begin?

The Court of Filth started a couple years ago when I was asked to put together a show for a bar downtown, and whenever I have access to a stage I want to share it with other performers. I know how hard it can be to gain access to places for performers–especially since there are so many of us now–but I wanted to try to make that easier. So I put together a little variety show with all types of queer performers and experience levels.

Eventually we left the original bar, and with the help of one of my favorite people in nightlife (and regular life), DJ JCLEF, we found our way to our new home at Rockbar. It has been such an amazing experience working with them, and I think it has brought a whole new light into the show.

With this month’s lineup, I’m not sure I really know what to expect. What I do know is that all of these performers are amazingly talented, but also very different types of performers and different styles of drag. These are some of my favorite queens on the scene, so I know people can definitely expect to be entertained all night. 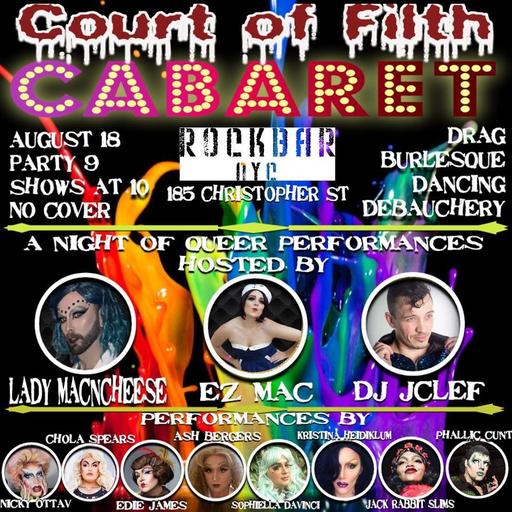 Have a great show! Anything else in the works for you?

I have a few upcoming projects that I’m still ironing out all the details for, so I don’t want to say too much. What I will say is that my sister Nicky Ottav and I will be returning to the brunch scene very soon, and I’m very excited to get back to that. Everyone will have to stay tuned to my social media for details once it’s all finalized.

Definitely a yay with a hint ummm? Like, why? But also, why not? She’s Cher, bitch. I wish she would redo her one woman version of West Side Story, but I’ll take ABBA covers for now.

As will we all! Thanks, Lady Mac!