A drag queen best known for comedic shows in the polar opposite scenes of Brooklyn and Long Island, it was actually a poignant and political number that may have cost Frida Cox a recent pageant win. But no worries… there is still a lot to come from this bawdy, brave BearLady. [Cover photo: Thomas Evans]

Thotyssey: Frida, hello! Thanks for chatting with us! So, I see that just you competed in the first Mx Nobody pageant prelim recently… did you enjoy the experience?

Frida Cox: Hey there! The Mx Nobody Pageant was such a cool competition because of how diverse the experience and talent was. However, personally I did not loooveee the experience.

Oh no! What happened?

I performed a piece about lynchings and black folks being shot and killed indiscriminately. The mix uses Jade Novah’s cover of “Strange Fruit” mixed in with Sonya Renee Taylor’s “When The Shotgun Questions the Black Boy,” with projections of colors, some lynchings and the photos of the murdered mentioned in the spoken word.

The audio alone could cause someone to catch their breath from the analogies and the topic of conversation. But drag is art, and I wasn’t going to only do a funny number because my piece may make some folks uncomfortable. My bearded drag and my bear body in drag already makes people uncomfortable–but I still live proudly. But I guess my number was too “jarring” for the judging panel, because I didn’t even place.

A bunch of audience members came up to me as soon as the top three were announced, and were shocked that I didn’t place… and felt it was a wrong call. I wondered what about my number caused me not to place amongst the ones that did. The hosts and the judges came up to me afterwards and told me how beautiful and powerful my number was, which made me even more confused. One judge even said I was so close to placing, yet the images of the lynchings were a bit jarring. “We come here to escape that kind of stuff… we shouldn’t, but usually that’s what we come here for. Your number was so beautiful and powerful.” That judge saying that made me think that because I showed lynchings for a Black Lives Matter [message], that’s why I didn’t place. But I’m sorry… as a black person, that’s something that can’t just be sugarcoated. Lynchings happened, and wrongful black deaths continue to happen. Those lynchings were and are my reality. So I don’t apologize for the use of “jarring” images in my number. I just feel that my art wasn’t truly appreciated, and a comical number was what they truly wanted from the competitors.

Wow, that pretty much sums up the state of drag in the Trump era. We all want to escape from this reality into our safe spaces and experience silliness and fun… but drag queens have always been on the frontline of activism and social justice.

I agree! As one of my theatre professors, Maggie Lally, always told me: “dare to be uncomfortable.” Art isn’t always supposed to be comfortable and convenient. Sometimes it speaks the nasty truth that people need to recognize. Sometimes it moves you to tears, anger, regret, laughter, etc. Especially in this climate, there should be some art that have some sort of statement to them. It makes me wonder how my night would’ve went in the competition if the judging panel was more diverse.

So, where are you from originally?

I spent most of my childhood between Williamsburg, Brooklyn and near Avenue A in Manhattan. I have been living on Long Island for about a decade.

And what were the arts or influences that first inspired you?

Theatre as a whole has always been my love. The first time I was ever introduced to the stage when I was little, I fell in love with theatre and performance. I actually have a BFA in Theatre Acting,

Do you have a dream stage role?

Definitely the Genie from Aladdin, but I have also loved emotionally demanding roles where I can truly be vulnerable.

How did Frida come about?

She was born from a theatre department drag show, and cultivated over a semester studying makeup and drag thanks to Sean Sullivan. Fun fact: at first I didn’t really love the name “Frida Cox,” but it grew on me.

It has a nice ring to it! These days, we can find you dragging pretty regularly in both Long Island and Brooklyn, which are at polar opposites geographically and aesthetically. Do you find yourself having to be two different Fridas for both scenes?

There is only one Frida Cox. Sometimes if I’m on Long Island, I feel I may need to do a number different than what I would do in Brooklyn or in Manhattan. However, all numbers I do I make sure are me to the T. I don’t believe in changing yourself for a venue, or people. That’s why I work to be a well-rounded drag queen with different styles of performance at the ready.

That’s a great place to be! It must be a challenge to get there, though.

I love being a drag queen. It gets tiring and frustrating, especially being a bearded queen because, thanks to Drag Race, a lot of audience members want a fishy, hairless, fit drag queen… and I’m not that. But when people tell me that I’ve made their day, week, year… that’s when I know this is it!

Werk! Well, you’ve got a lot going on as far as upcoming gigs go, so I wanna dive right into the itinerary. First off, on Sunday you’ll be returning to Toro Loco downtown, with fellow queens Jessica Rose and Yaya Tigerlily.

Yeah, I’m a special guest at drag brunch this Sunday at Toro Loco, 1-4! 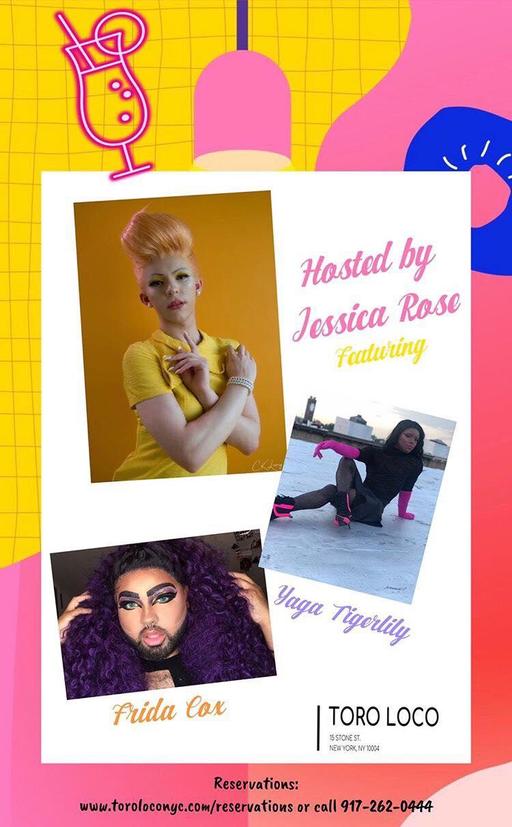 And I see that a new event is premiering at Revolution in Amityville, featuring Boyish Charm and yourself.

This upcoming Tuesday! Thanks to Nick Dantuono, a new production company called Nick Anthony Productions is up and coming. He is working with Syn and Ivy Stalls (as producers, and hosts) and multiple other queens to help bring drag back to Long Island. Nick really wants us all to work together for the effort. This Tuesday will be the first Out & Proud Tuesday; if it goes well, maybe there will be more. Boyish Charm and I will be hosting–so expect stupid, funny moments. It is a [platform] for anybody that wants to showcase their drag, or art, in general. 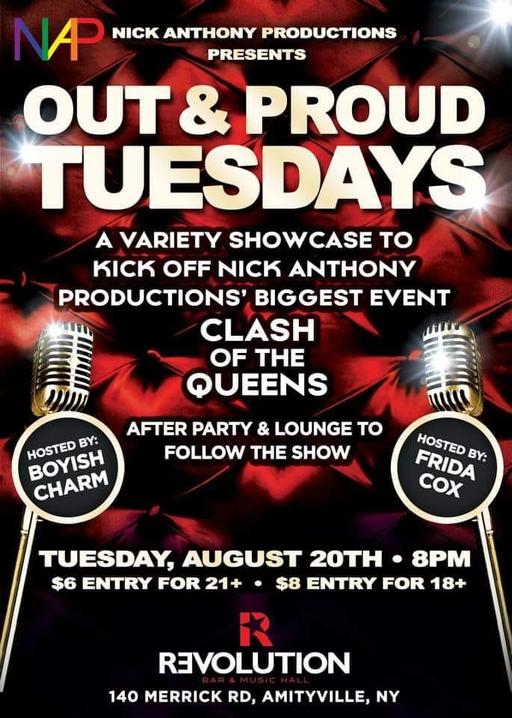 Speaking of Boyish, you’ll be doing her monthly show at Gasolina in the Bronx next Sunday! Have you done that before?

I haven’t, but Boyish is a good drag sis of mine and I know the show is going to be so much fun! Especially because my close sis Ruby Monroe is doing it with me as well. 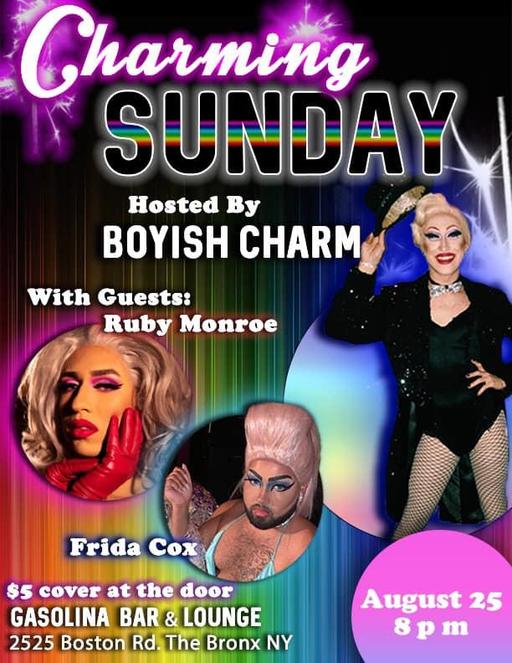 And we mentioned Jessica Rose earlier; she’s another young queen who’s making a name for herself in Brooklyn and Long Island.

She has monthly showcase at Brooklyn’s Gold Sounds, and you’re gonna fill in for her as host of the next installment. 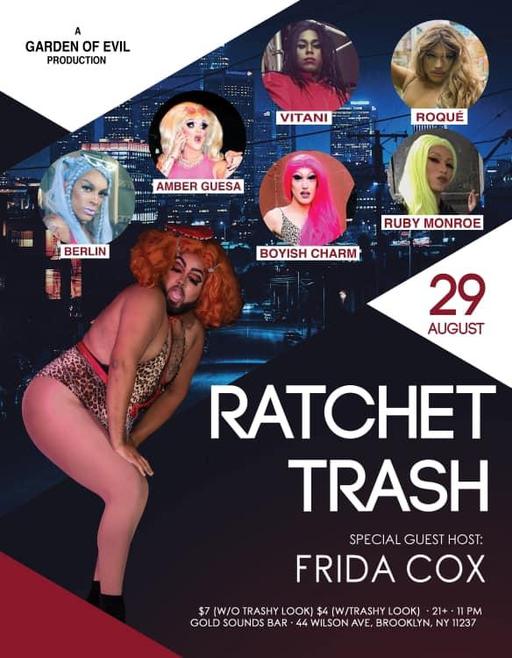 And then you’ll be at Pride for Youth on Long Island for a special event.

Yes! Friday, August 30th I’ll be there for Coffeehouse Drag Competition as a host. This competition is geared towards the younger crowd at PFY, ages 13-20. It’s a minuscule version of PFY’s bi-monthly [drag competition] Drag Factor. 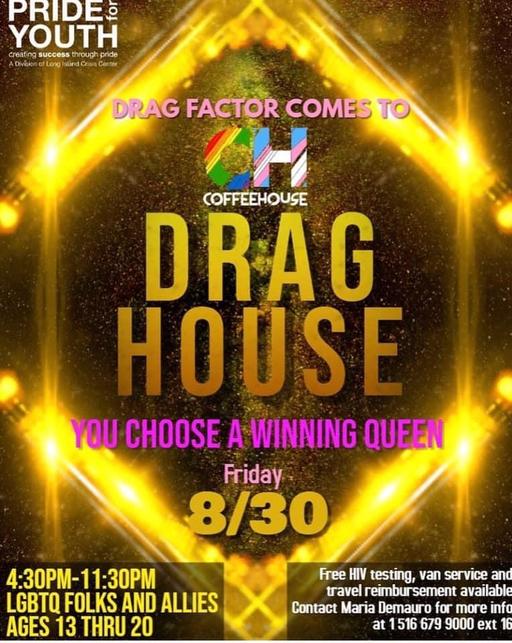 Then Saturday the 31st, you’ll be part of a big Long Island drag cast at One Eye Jacks for Ivy Stalls’ end of summer show! It must be rare when all you girls can get together like this.

Yes! It really is so rare, and even then we still always end up missing a couple of people. It’s the last event, on Long Island, of the summer months! It’s going to be so insane, and the food and drinks there are soooo good. I’m already thinking about their meatball sliders! 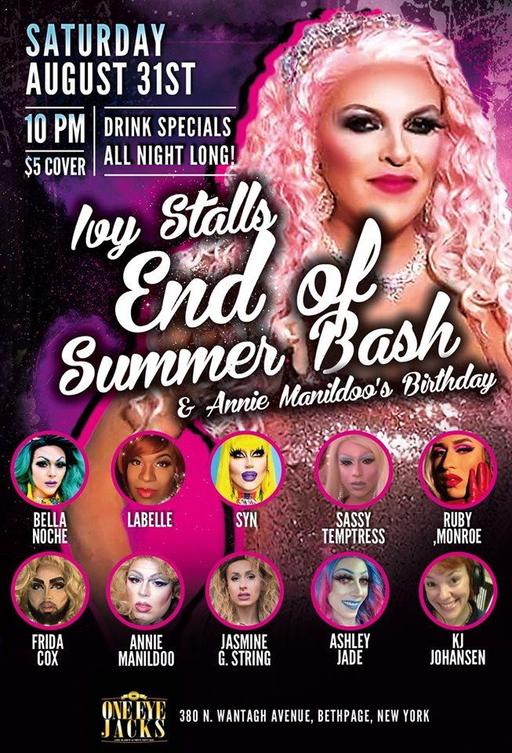 Get these gigs! What else do we need to tell the children!

Oh yes! It’s almost voting time, so people need to get educated on the candidates–lord knows I need to as well–and get ready to vote! So many choices, but in the end we can only have one: that’s why education on candidates and voting is so important.

Very heard! So okay, in closing… what is your best advice for someone who is considering making their drag debut?

My advice is to not follow Drag Race completely for what drag is. If you’re thinking about getting into the drag gig, then you need to go out and support your local queens. See what they do and bring. Educate yourself and the different styles of drag makeup, hair, performances and clothing, and experiment with them all on your own. Then when it’s been a while, go out there and try a local showcase or competition. Competitions are a great way to get your name out there, meet many other performers and push yourself to change for the better. Also, never wait ’til you’re ready… because that time may never come. You have to just rip the Band-Aid off and do it!