With a name derived from a punk rock princess and a famous murder victim, a resume that includes both hosting a Hell’s Kitchen variety show and an upcoming turn competing in Brooklyn’s most oddball pageant, and a drag mother who happens to be one of NYC’s (and “RuPaul’s Drag Race’s”) quirkiest queens… the Nancy NoGood experience is hard to categorize. And that’s why we love her!

Thotyssey: Hey Nancy! So, I know it’s been nearly two months since it went down, but I was wondering how Berkshire Pride was for you.

Nancy NoGood: Oh goodness, Berkshire Pride is always a great time with a beautiful community. It was my second year performing on their stage. Plus, I loved hanging out with the crowd. And to spend the day with them discussing Pride and how we can better each other in the community is truly something else.

You were living in the Berkshires at one point.

And now that you’re back in New York, you’re mostly a Brooklyn Girl.

Very much so! It’s really morphed into that. I started out in lower Manhattan, and truly love working there, but Brooklyn has always felt like home to me. It’s where I’ve always lived in the city, and it’s the drag here that I get the most inspiration from. Plus, I never feel like I need to hold back in Brooklyn. I can totally let loose and move in any creative direction I want to. It’s such a blast!

Brooklyn is good for that! Where are you from originally, and what were your earliest forays into performing and art?

I was born and raised in Greenville, South Carolina to a very conservative and Catholic family. So I would say my earliest forays into the arts were a mix of Catholicism and  Southern music. I grew up listening to Dolly and Hank Williams tapes, as well as Christian Radio, for instance. And as much as I’m grateful for that, I eventually wanted to experience something outside that. Which is natural. But then I wasn’t really allowed, which of course inspires curiosity. And that led to sneaking around trying to see what I could see, which led to a love of horror films from an early age. So I would say little Nancy was birthed out of Dolly, Christian Contemporary, and Alfred Hitchcock. Ha!

And since your drag name partially comes from Nancy Spungen of Sid & Nancy fame, I’m guessing you’ve also been inspired by punk rock.

Oh yes, but interestingly enough that was later in my childhood. When I was in high school and I moved away from most of Catholicism and started listening to punk, metal, and Chicago house music. The only parts of Catholicism I kept interest in were the exorcisms at this point. Which are WILD.

Yes, that’s the fun part! And besides Spungen, you’ve said that you’re also partly named after Nancy Clutter, the real life, young, small town girl whose murder was detailed in Truman Capote’s book In Cold Blood. What drew you to her story?

I had just finished In Cold Blood when I was starting drag, and I was drawn to Nancy’s story immediately. She was an all around model girl in the town–taught neighbor girls how to bake pies, etc.–but she wanted more, which you learn about in her diary entries. She wanted more with her boyfriend and her best friend, Susan.

Both she and Nancy Spungen are two women who met unfortunate ends, but never stopped living the lives that they wanted. On the surface they look like opposite ends of the spectrum, but I think they’re very much alike. And for me, drag is supposed to honor the innate power that women have. And I hope I do that for them, by taking on the name of Nancy.

So how exactly did your own drag journey begin?

In earnest, in 2015. I had dabbled in it previously and have seen every season of Drag Race since it’s inception, but my debut in drag was Halloween of 2015. I was the worst Hedwig you have ever seen! Nancy came around that November.

At one point you were “Nancy NoGood Bottoms.” Was Dusty Ray Bottoms your drag mother?

She was! I am proud to be her drag abortion. Yeah, Dusty gave me my debut at her weekly Frisky Fridays show, at Pieces.  Ugh, it was amazing night with Scarlet Envy as the guest host. I had been attending it almost every week, and had gotten to know Dusty and [her now-fiance] Marc. The pageant drag of the south interested me, but seeing what Dusty was putting up every week made me want to try it out for myself. I came to NYC to be a performer, but auditioning was terrible! I wanted to have my own creative outlet and explore my own ideas. Dusty showed me that that was possible. She gave me the start that I wouldn’t have had otherwise and gave me helpful lessons I still use today. I certainly wouldn’t be the queen I am today without her.

We became friends at that time, but very soon after this I moved to the Berkshires. I had a lot I needed to figure out for myself. This also was happening when Dusty’s career turned a corner and she got on Drag Race. We were losing touch, and I wasn’t sure where I wanted to go with drag… if anywhere at all! I dropped her name out of respect for her and all the moves she was making, and for me to sit down and figure out the best life for myself.

We still keep in touch every now and then, which is lovely. I still make sure that I can make her proud… I mean, you have to respect where you come from! Even if you were ripped from the uterus!

How would you describe Nancy’s aesthetic and performing style today, for the uninitiated?

Oooooh! I would say she half what you want, and half what you didn’t know you needed. She’s punky and spunky, but sweet enough to approach. She’s like if Pussy Riot headlined at the Grand Ol Opry. She used to be all lip sync, but I’ve actually started ventured more into standup comedy more. And that shit is so much fun. It’s a whole new challenge, where the music ain’t running but I am still gonna make you laugh.

Speaking of laughing, you actually have a show going at the Broadway Comedy Club that’s been running for a bit!

Yes! Thoroughly Gay Thursdays hosted by myself and Drew Tessier. And we’re back this month, actually! Thoroughly Gay Thursdays moves to Wednesdays this month, on August 14th at 8:15 at the Broadway Comedy Club. It’s a monthly rotating roster of queer comics giving you their best. It’s always a hoot, and I can’t wait to share the stage with these folks. 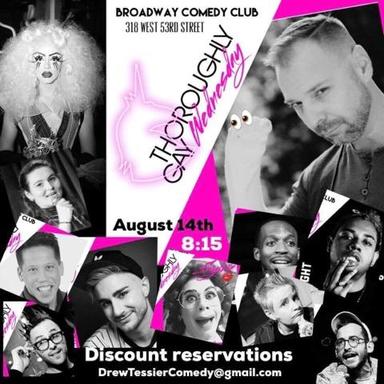 And right before that–this Saturday, in fact–you’re back with another show you’ve been building at Precious Metal in Brooklyn! What’s this night about?

Yes! It’s going to be the second installment of my monthly show, Names & Faces. It’s a choose-your-own-adventure variety show where the decisions of the audience impact the narrative of the evening, as well as the order of the performers. It’s WILD.

This month is all about what makes for a great summer vacation. I’m pulling influences from the classics Wet Hot American Summer, Psycho Beach Party, I Know What You Did Last Summer, and more. We have drag, live singing, and comedy all rolled up into a neat (and no cover) package. August 10th at 9pm at Precious Metal in Bushwick! 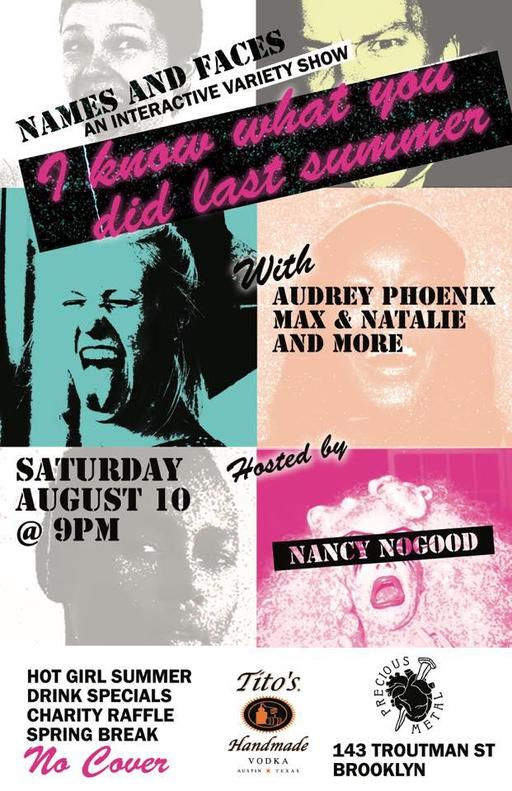 And later this month, on the 22nd, you’ll be at Brooklyn Bazaar, competing in Week 3 of the celebrated Mx Nobody pageant! That’s known for being both very inclusive of identities and styles, and very out-of-the-box in general. What made you want to try out for this?

I’m so excited for Mx. Nobody, OMG! I realized that I’ve been producing and hosting pageants in the Berkshires for almost two years now, and yet since I started that I haven’t competed much. I figured it was as good a chance as any to show Brooklyn why I’m here and why you should like my shit! Also, my routine is killer if I do say so myself, ha! I can’t wait for [hosts and producers] the Nobodies to see it, as well as Brooklyn. 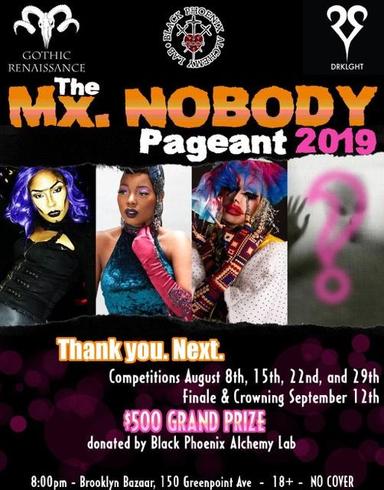 Good luck! And looking ahead… September 13 you’ll be at DROM, taking part in a wrestling-inspired burlesque event, Tasselmania IV! What will you be doing there?

Tasselmania! A show created by some of the hardest working people I know in NYC nightlife. I will be competing against Miz Jade for the title of the first ever RHP Lip Sync Match belt. She’s a phenomenal performer, but I’m not too shabby myself. So, it’ll be a formidable match for sure. 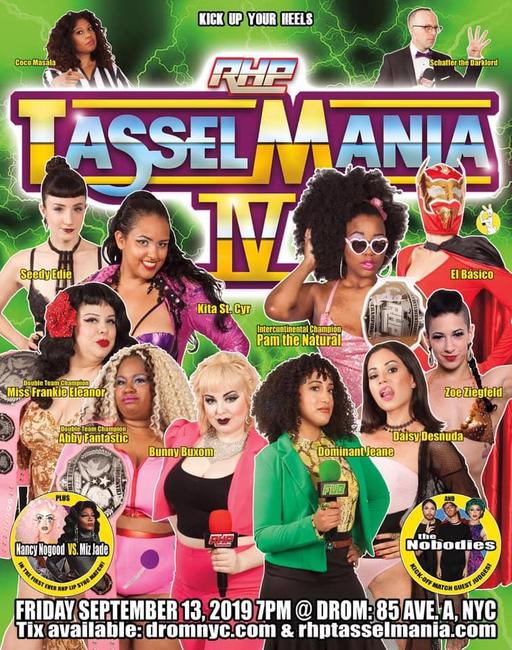 What else is on the horizon for you?

On August 18th at 3:30pm, I’ll be scooting over to Albatross to guest at Nips & Sips drag bingo with Haireola Grande! Other than that, keep on the lookout for my monthly shows Names & Faces and Thoroughly Gay Thursdays. A few other projects, too… but the world will just have to wait and see!

Congrats and good luck with everything! Okay, last question: what will your tagline be when you first walk in to the workroom for Season 13?

It would most certainly be “She’s up to….something…?”

Indeed she is! Thanks, Nancy!