When not baring it all for one fan community online, this multifaceted performer is turning it out on drag stages across the city… and is about to make her headlining debut. Applause, applause, applause for Damian Hult, aka Glamydia Clap!

Thotyssey: Glamydia, hello! Thanks for talking to us today! How are you this lovely Saturday?

Glamydia Clap: Hello! I’m doing wonderfully, soaking my toes in ocean water. How are you?

I’m fine, but you sound finer! Where are you?

Montauk, actually! I’ve come out here every summer since I was born! It’s a great space to relax and take time to work on myself and my career in a nice, quiet place.

That sounds heavenly!  Are you a native Long Islander?

I grew up mostly in Great Neck, though I’m originally a Queens boy.

Ah, me too! Were you always interested in performing in some capacity?

I was. I started performing when I very young. I think I was 8 when I first took to the stage as a newsboy in a local production of Gypsy. Little did they know I was vying for the role of Miss Mazeppa.

Did you pursue theater schooling in NYC?

I did! I went to Marymount Manhattan College for Directing, for an entire full semester. And then I quickly found out that I should have been pursuing my drag career.

How and when did drag enter your life?

Drag actually entered my life pretty early, when I performed as the “not you” girl in The Producers when I was in ninth grade! I played female roles two or three times after that as well, though the form of performing I do now–in the bar and club scene–started moreso when I was leaving my senior year of high school. So, I’ve been at this for a large portion of my life.

Wow! What do you think it is about drag that “does it” for you?

I’ve always been extremely interested in every single aspect of theater. Not just the stage performance, but the lighting, the costume design, the producing, the choreography, and everything in between. I truly believe that drag is the one form of performance where you get to do it all, and I love having that opportunity. Also, that moment when I look in the mirror and say “wow, you are beautiful” is something I don’t think I could live without.

Glamydia’s always gorg every time I see her. Do you have any particular style icons?

A perfect mix! You’re largely performing in the City nowadays, but there’s a growing Long Island drag scene thanks largely to the effort of a few hardworking queens. What do you make of Long Island drag?

I performed on Long Island for quite a while, actually. We may use different terms to describe the efforts of said queens. Let’s just say I decided to stop working out there for a reason. But I love how welcoming and professional everyone in NYC has been to me! The opportunities to succeed in the city are far more widespread than out on the Island, I couldn’t see a reason to leave the NYC / Brooklyn scene again.

It all began with a tweet, actually! I was feeling a bit frisky one day, and decided to tweet out a picture of my GAP underwear to my 100 followers. And when I woke up, I had thousands of followers and a bunch of different offers. And since my main gig was drag, I thought “well, it won’t hurt my ability to get a job,” and just sorta jumped on it. After filming my first few scenes with Mormonboyz (now Missionaryboys, for probably legal reasons, but who knows), I decided to open up some fan pages, and my “brand” pretty much just grew from there!

It must be pretty thrilling and empowering, to have that much control over what your viewers experience on that platform.

It is! On my experience, when you work for a studio you kinda have to just go along with whatever they ask of you. Of course you can say no to something, but it does mean you probably won’t get full pay and definitely won’t be hired again. When you have your own platform, like JustForFans or Onlyfans, it’s sort of like having your own sense of job security. The only thing stopping you from success is your ability to produce content.

That being said, I am working on making my content more consistent! It’s not always easy to find people willing to show all on camera, and sometimes it’s hard to do it yourself. It is extremely empowering, though, to have that sense of control over your own body and sexuality. A lot of people don’t experience that, so I’m grateful to have those platforms where I can express it.

I am comfortable with it! As long as you’re there to see a drag show, not to try and fuck me. I’m pretty open on all my social media about all the aspects of my life, though. I think it makes for a more rounded person. I don’t know about you, but I’d rather jack off to someone with a personality rather than to a washboard with deadeyes.

I have a strong feeling WoW wouldn’t let you on in the first place if you did it, either! I can’t be certain of their contracts, but I doubt they’d allow it. There are some RuGirls who’ve done shoots before Drag Race, though… which I will decline to reveal whether or not the pictures are saved to my phone!

Ha! Well, I guess that brings us back to Glamydia and “Catch the Clap” at Rockbar on Wednesday (9pm), which I believe will be her debut headlining show.

Tell us what’s gonna go down!

I’m super excited for the show, it’s certainly a long time coming. The plan is to put on a show that encompasses my favorite parts of every show I’ve been part of, while adding my own little twist. There will be tons of numbers, (lip syncing, dancing, singing, and… other?), both my classics and brand new ones I’ve created just for this show! We’ll also have games and special exciting things for our audience members. All around, it’s gonna be a really fun night. Andy Starling joining along will be a blast too, since I’ve known her for a while now yet we never performed side-by-side. So I’m really interested to see what she brings, since I know it will be spectacular. 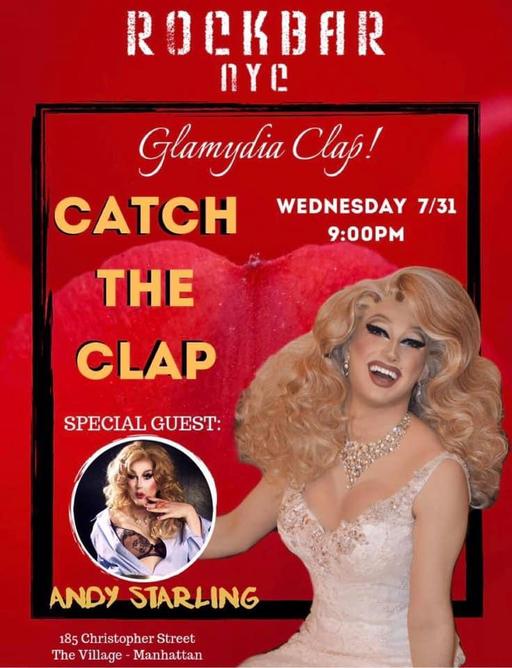 Sounds incredible! Anything else that needs to be said?