After an eventful three years since we last spoke, Thotyssey catches up with the Drag Race Season 9 star to chat about her bridal reality show, DragCon, fan photo etiquette, her (temporary) return to weekly NYC gigs, and the one “pageant” title she will never step down from.

Thotyssey: Hello Alexis, great to talk to you again! So it’s been a whole month already, but where were you for NYC Pride?

Alexis Michelle: OMG, this June was my craziest pride to date! It was busy, especially here in NYC for World Pride… but I love all the rainbow energy. I think all year should be like that! I’ll just tell you about my last few days of June, since the month would take this whole interview! I had the honor of dancing with a group of queeroes backing up Cyndi Lauper, opening the launch at Barclays. Then I had two amazing sold out nights of my new cabaret show at Club Cumming. Saturday morning, I flew to Chicago to perform at Pride in the Park headlining with Todrick Hall, Iggy Azalea, Coco Montrese, Taylor Dayne and more. Then Sunday morning, I painted at the Chicago airport at 4:30am to get to the march here in New York on time… we all know how that went, hahaha! But seriously, the vibes were great. And then I finished the night at Viacom for an awesome party with Lady Bunny spinning tunes!

Wow, I just sat home and watched Gilmore Girls, lol! Is it amazing to you that it’s been over two years since you starred on Season 9 of RuPaul’s Drag Race, and here you are still constantly busy with gigs, projects, collaborations, etc?

It’s not amazing to me, it’s appropriate! But I am deeply grateful. Once the initial touring craze slows down, I think you find your way into your pocket of showbiz and end up doing the projects that are really geared towards you and who you are as a performer.

Werk! I loved your recent performance of “I Am What I Am” with the American Pops Orchestra… very dramatic and fun! Where was that?

Thank you! It was part of a concert called I Am What I Am: an evening of Jerry Herman and I was invited to come sing with The American Pops Orchestra lead by the wonderful Luke Frazier. It’s a JOY to sing with a full orchestra, and I got to perform at Arena Stage in DC with Paige Davis, Mauricio Martinez and Kathy Najimy! What a gag!

Amazing! And now Thorgy is performing with her full Thorchestra… I guess now even the “high arts” are better with a healthy dose of drag.

Speaking of Thorgy, I really enjoyed “Drag Me Down The Aisle,” a reality show that starred you two with Jujubee and Bebe Zahara Benet, where you advised brides-to-be before their wedding. It was super cute! Only two episodes were aired on TLC, might we see more in the future?

Actually, it was just one epic special so far, and then there was a second prime time airing of the same wedding. We had so much fun filming it and making Emily and John’s wedding awesome, so fingers crossed for more soon!

Yes, definitely crossed! So, I won’t go dragging a certain young queen’s name further through the mud, but there’s been a bit of controversy regarding a recent Drag Race star who refuses to take (free) pictures with fans. She has her own reasons for this, but I think it also speaks to the greater issue of of how much or how little a Drag Race alum should let in a particularly rabid fanbase. Do you find that challenging to navigate sometimes still?

Ahhh… hot topic! Quickly, to the queen you’re speaking of: there is a valid part of the point she was making that I’m not sure has been mentioned yet. Venues and promoters usually charge for meet-n-greets. And there is sometimes pressure to keep the meet-n- greet’s value by not doing pictures with people who didn’t pay. So there’s a layer of respect to the people that paid, and also the venue that hired you. That being said, I think that’s not something that needed to be Tweeted.

For me, the only thing I’m strictly against are photos when I’m not on stage, without consent. If I’m performing under stage lights, fire away baby! But if I’m walking or standing around, or in an elevator, please ask. The way I separate meet-n-greet pics from quick photos people ask for when I’m on the go is, I offer to take a selfie. Rather than a posed shot usually with lighting, a selfie is more casual and I feel that keeps meet-n-greets that people paid for sacred. Plus, I can control my angles; I take a mean selfie!
Also, if I agree to take a pic and I say “make sure your flash is on,” it’s not a discussion. I don’t give a fuck if you think a dark shadowy pic of me is “good,” I didn’t spend an hour on my face to be shot without a flash… so don’t argue! I will take your phone and delete said pics.

A valid warning! I also wonder if maybe New York queens are already wired to think of pics as being part of the gig? All the girls here take tons of pics with fans after their shows, regardless of whether their face has been sweated off or their bladder is about to explode. Maybe that’s not the case with every local scene.

I bet it’s common anywhere, and if my face is a shitty mess I probably will refuse. Luckily that’s not too much of a problem for me!

Ha! But of course! So as thrilling and fulfilling as it is to do these grand scale performances, you must sometimes miss the routine of a weekly local show.

Weekly shows definitely keep the drag muscles working in a different way, and I have missed that regularity.

Well, for a little while at least, you’ll be back in that saddle again! While your local sis Sherry Pie is Away Doing Stuff, you’ve taken over her Marquee Mondays at REBAR! That’s co-hosted by Danny Marandola, and is themed around a different stage or movie musical each week.

Yes! Miss Pie is taking some well deserved time off, so I’m stepping in for a bit. Danny and Sherry have done Marquee at REBAR for over a year, and it’s such a fun show. I’ve guested there several times, so stepping in and co-hosting with Danny is awesome. We had a great first week with Company, and I can’t wait for Monday… we are doing Funny Girl! 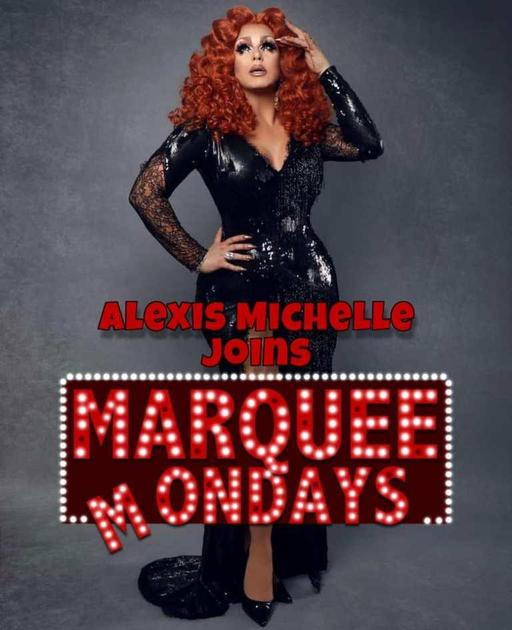 I’m also doing Sherry’s bingo Wednesdays at 8 at the Blue Whale and back with Danny at 10 at the Sip-N-Twirl for their “Big Movie Adventure” show, both in the Fire Island Pines.

And on August 10th you’ll doing Dragapalooza at the Hard Rock Atlantic City! Along for the ride will be Dusty Ray Bottoms, Derrick Barry, Coco Montrese and Rhea Litre.

Yes, so excited to sing live with these awesome dolls! It’s gonna be a rockin’ good time! 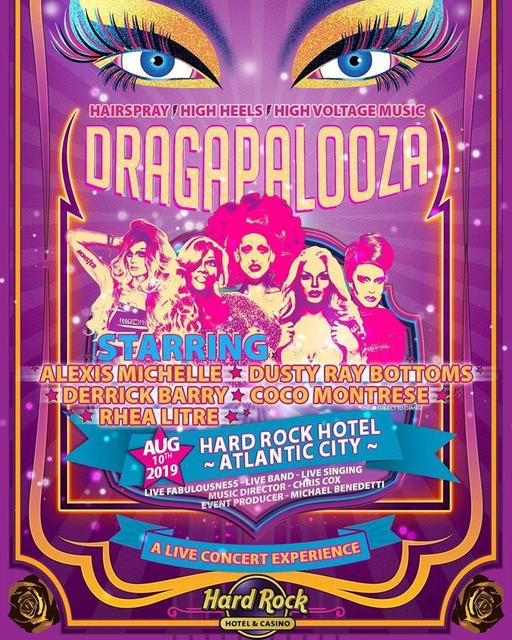 Should be a fun summer. What are your DragCon plans?

Can’t wait to see it! And the question that’s on everyone’s minds: when the next All-Stars season comes a-calling, will you answer?

I’ll have to check my dance card to see if there’s space.

Fair! And I’m asking many queens, but your input is essential: the CATS movie trailer! Totally creepy, or amazing?

Creepy, but my gay ass will still go!

Give up. I’m not stepping down.