A relative newcomer to both NYC and drag-tinted burlesque, the young Rara Darling has already established themselves as a major player in the nightlife scene. And with a new installment of the much-celebrated Snack Theatre–co-created by Rara just a few months ago–underway, the future of drag and burlesque performance might be revealing itself at last.

Thotyssey: Hello Rara! Thanks for talking to us on this gorgeous but gross New York summer afternoon! How are you?

Are you a Brooklyn resident?

Yup! I live in Crown Heights.

And how long have you been in the NYC nightlife scene?

It’ll be Rara’s second birthday in September! Everything happened really fast, it feels like I’ve been doing this forever.

You’re still a baby! And yet you’ve accomplished so much. Where are you from originally, and what were your first artistic pursuits?

Actually, I was quite the jock growing up; I was an intense athlete. I quit sports my senior year to do this awful play, and decided I liked theater… but I never considered a career in performing. In college I dabbled in theater and producing, but again focused mostly on sports (I played ice hockey). I became a huge fan of burlesque and drag when I moved to NYC, and off a whim I decided to sign up for the amateur burlesque night at House of Yes. This has been my greatest passion, and basically my whole life, ever since!

What do you think it is about burlesque that appeals to you so much?

Burlesque has taught me how to love myself fully–my brain, my body, and everything it can do. It’s also allowed me to appreciate that in others. My favorite part of what I do, personally, is mixing something gruesome or wildly inappropriate with something impossibly sexy. I like to push peoples’ boundaries in what excites them and turns them on. Sometimes I just want to freak my audience out.

I love how burlesquers are able to sexualize everything! I just watched your (amazing) Spongebob number. Is nothing sacred?

Oh, absolutely not! There are definitely some things that are off limits to me and in general, but I definitely push it pretty far. Spongebob is a fan favorite! I want to hear people be like “NOOO SPONGEBOB WHY!?”

Another thing I really admire about burlesque is that it’s a pretty tightly-knit community.

Yes, it’s an extremely supportive community for the most part. I feel so grateful to be a part of it. I’m especially lucky because being super queer has given me so much family in the drag scene as well. It’s also pushed me to incorporate drag into almost all of my acts! I’m kind of a drag queen, too. Rara is high femme, but in real life I’m kind of a butch dyke.

The worlds of burlesque and drag do seem to intertwine more and more, especially as both worlds become less defined by gender.

Yes! I love that. To be honest, the burlesque scene is also extremely queer. I find shows that intertwine several artistic genres are the most interesting to watch. I try to book a diverse variety of performers in all the shows I produce.

For a time, you were producing an eclectic night at Bizarre called “Primal Scream,” which your friend Theydy Bedbug described to us as being part burlesque show and part sex-play dungeon. How did you enjoy curating that night?

I loved it, at first. It was a pretty beautiful night, starting with a very queer and very kinky variety show that encouraged performers to be their freakiest selves. We incorporated a lot of sex and kink education into the show, starting with a consent talk and ending with another consent talk, this time in the nude (people pay attention when you’re naked), and a communal orgasm encouraging everyone to open up and leave their shame at the door. In the basement, we had an educational kink dungeon. Theydy and I ran the hot wax station, so it felt really beautiful and safe doing this kind of work next to someone I love.

On the other hand, it was also extremely emotionally and physically draining at times… and we had issues with the venue. What I did love was giving queer people a safe space to explore kink and educating people on consent. I miss it sometimes… it might come back one day.

Bizarre has been such an important venue for Brooklyn nightlife and performance art. It was the birthplace of Nightgowns! But the owner seemed to slowly withdraw support for his queer performers. And now, I’m hearing the venue is closed and soon to reopen as a stageless vegan restaurant. What happened?

I’m not entirely sure what’s happened there. I’ve distanced myself from them quite a while ago.

However, you’ve been doing “Keepeasy Sundays” at The Keep for some time now, I guess since you started burlesque? Tell us about that night.

I co-produce Keepeasy with the glorious Midnight Moon. We host Keepeasy every Sunday, doors at 10 with the night starting around 11, at the Keep. Perhaps I’m biased, but I think it’s a really special and unique night… I think it’s the most fun you can have on a Sunday. We have live jazz by the Keep Kats (our incredible house band), live jazz burlesque (all improvisational), gogo dancing, games, and an open mic! I pride myself in booking a diverse range of performers, so one week you might get glamorous classic burlesque and the next you might have a drag queen cutting off all their hair and eating it (ahem, Angelica Sundae). It’s really cool, incorporating the audience with our open mic; audience members are invited to sing or jam with our live band in between sets. Not to mention, the Keep is one of the most beautiful bars in NYC.

Snack Theater is your new baby with Angelica at the Chelsea Music Hall. It seems to have the scope of a big production, and offers a variety of genres and performances. You’ve had two installments and are about to have a third. How did Snack Theater come into being?

Angelica and I fell almost instantly in love with each other after the first show we were cast in together; at the very least, it was that way for me. I think she’s hands down one of the most brilliant and powerful performers I’ve ever seen. Getting close with her and working with her has reaffirmed that feeling. Quickly after meeting, I suggested we work together and she agreed. We both had been feeling like although there’s more of a platform to succeed as a cabaret performer of sorts these days–it didn’t feel like there was room for us in the mainstream.

Feeling discontent with only performing our work in the back of dingy bars (don’t get me wrong, I love myself a dingy bar and will never feel above it–it’s part of our culture and history, and I believe that’s super important), we decided that whatever we did needed to be huge. We sought out to create a platform that would elevate our art and the art of many other drag, burlesque and other variety performers in our community because, frankly, we deserve it. What we do is amazing, and deserves proper production quality and a huge audience.

When we got the opportunity to work with Chelsea Music Hall, we knew this was a game changer. I’m talking professional lighting and sound, dressing rooms with real space, lights, mirrors, etc… it all feels quite glamorous. And the people that own and work at Chelsea Music Hall really believe in us and want to see us succeed, which makes a huge difference in allowing us to accomplish this dream of ours.

Snack Theater is a hybrid of a theater show and a cabaret show. We like to think of it as a perfectly curated series of cabaret acts, tied together by a cohesive narrative with the help of our brilliant host, Julia Register. We build big props, we tech our acts, we do everything in our power to make this a huge production!

This coming Friday’s “Meet Me On Mars” edition of Snack Theater there at the Chelsea Music Hall is already giving me my whole B-Movie life. What can we expect?

An absolute epic spectacular! There will be very kitschy elements of 80’s sci-fi movies, blended with our own style of satirical darkness. We will bring you on a journey through space and time, and it is our goal to make it feel as immersive as possible. Our cast is stacked with extremely talented performers including Untitled Queen, Mini Horrorwitz, Theydy Bedbug, C’Etait Bontemps, Holly Ween, Savion and Iodine Quartz. Queen Robert is our amazing stage manager, and Midnight Moon is our glorious stage hand. During intermission, Junior Mint will host our runway / costume contest where audience members are welcome to walk the runway for a chance to win an amazing prize pack sponsored by Rosebud Tonic CBD, Bushwig, Bacardi and us! If you are a VIP, you will be served space-themed drinks by sexy space babes, also sponsored by Bacardi! We encourage everyone to dress in theme, we see this as a fashion event as well as a show. It’s definitely an event you do not want to miss! 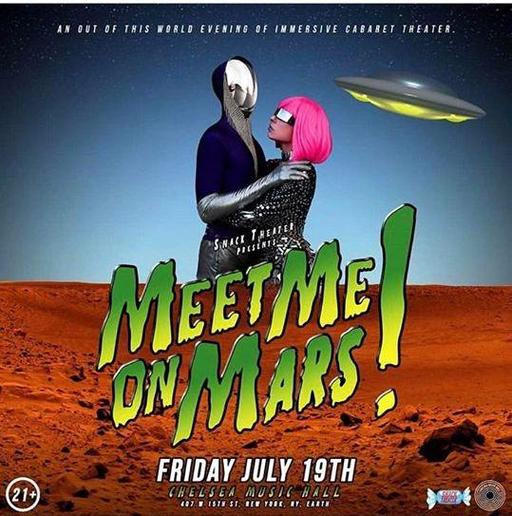 Anything else coming up with you?

Yes! For me, personally, things are picking up big time, which feels exciting. All I can say right now is, you can expect a whole lot more for Snack Theater!

Excellent! Okay, my traditional last question for burlesquers: what do you think is the worst song is to perform to?

I think white people really need to stay away from songs with any racist language, and just be very careful in general when performing a song sung by a POC. Other than that, go off!