A shutterbug turned vintage vixen beaming with old Hollywood glamour, this young performer represents the rise of the throwback queen that’s happening in some local sects of the dragoshere. Having recently competed as an Ultimate Drag Pageant All-Star, Edie James is about to bring a special showcase to the Wet Village which will surely gag us all.

Edie James: Hey Jim, or perhaps I should address you as Thotyssey? I don’t know, I’m new here… but regardless, thank you for having me! This feels like a milestone, LOL!

Ha! The pleasure is all mine, and “Jim” is easier to spell so just call me that! So, how was your Pride?

Pride was great! I admittedly was more on the sidelines this year, but that’s where she’s most comfortable… at least when it comes to large crowds. How about you? Survived, I see!

I was right there on the sidelines as well. Five million people! But at least nothing catastrophic happened. Even Madonna supposedly had a good Pride Island set! What do you think of Madame X?

I’ll be honest, I couldn’t even tell you the title of her single(s)… I’m the worst, though! If it’s not Lana Del Rey, I don’t really know what’s current… #LanaDelGay #GuiltyAsCharged

She’s gonna do a song with Miley and Ari! Exciting… but also potentially a disaster.

Agreed! Same goes for the film the colab is for. Honestly, I don’t know why we are forcing all these premature remakes. But, I enjoy portions of the cast, so let’s see?

I could go on forever about this uninspiring re-boot trend… But let’s return to the truly inspiring subject of the hour: Ms. Edie! Where’s your hometown, and what were you into in your early years?

I moved around a lot as a kid, but I settled in a little town called Waterville in Upstate NY from seventh grade on. And I guess my main passions were independent films, photography and Katamari Damacy… or at least when I was graduating high school.

And did you then venture into theater or the performing arts at all?

Oh yeah! I did the high school musicals as well as drama club, but focused on fine/visual arts for my college experience. Got my BFA in Photo from FIT back in 2011!

So it was college that eventually brought you to New York.

Yes, and of course the burning desire every gay boy shares: to escape their small town.

And then, how was Edie born?

Well, when I was in school I spent all my time styling and photographing models. Then, after graduation, I focused more on self-portraiture, and realized I wanted to style myself the same as the girls in my college portfolio.

Was there a specific style, or element of style, that appealed to you?

As I alluded to earlier, I’m a mild film buff. So, actresses were always providing plenty of inspiration. I’m a big fan of period films and vintage glamour, so that’ll usually make it’s way into the mix. All and all, though, I believe that less is more… so I’ll usually focus on one design piece or element, and let it dress up the rest!

Did anyone or anything specific inspire your drag name?

Well, Edie James was always my fantasy baby name–ya know, for the unborn daughter that would most likely never come–and then when I decided to take my drag endeavors more seriously, I decided to snag it for myself. Unintentional side note though… it’s actually ended up being a gender-swap of both my parents’ names (Edward and Jamie).

That’s perfect! Where and when did you start performing in the city?

I’d say I always try to tell a complete, layered story in four and a half minutes or less, and hope that it resonates with the audience enough to come up and talk to me afterwards. Those are always the most rewarding experiences.

You competed in a standard season of The Ultimate Drag Pageant at the West End, and then recently returned for an All-Stars season.

I did. And, although it was a sometimes a stressful and anxiety ridden time, it was always very rewarding due to the people I got to meet and the growth I saw in myself.

Were the experiences similar to each other?

I think the only difference I saw / felt in All-Stars, as opposed to my original season, was that I wasn’t as scared to “do me.” In this city full of queens, it can be easy to get caught up in the “comparison game,” and that’s always my downfall. So my second time around, I’m happy to say I could silence that demon a lot more!

Happy Almost Birthday, by the way! I see you have a special showcase for the occasion coming to Rockbar on July 7… tell us more!

Well, it’s my two year drag anniversary, as well as my 30th birthday. So to mark the occasion, I wanted to do something a little special! I decided I wanted to just use the opportunity to celebrate how far I have come, and to give a little back to those who helped me along the way. I’ve asked my good childhood friend, DJ Faye, to man the helm–so to speak–and I have put together a cast of drag sisters who in turn have either booked me over the passed two years, or have cast me as backup in a number, or vise versa! Those queens include: Allegra White, Chola Spears, Cicatrix, Lady Macncheese, Miz Diamond Wigfall, Sequoia, Vivica Galactica, Whatevra and Whendy Whaxwood. 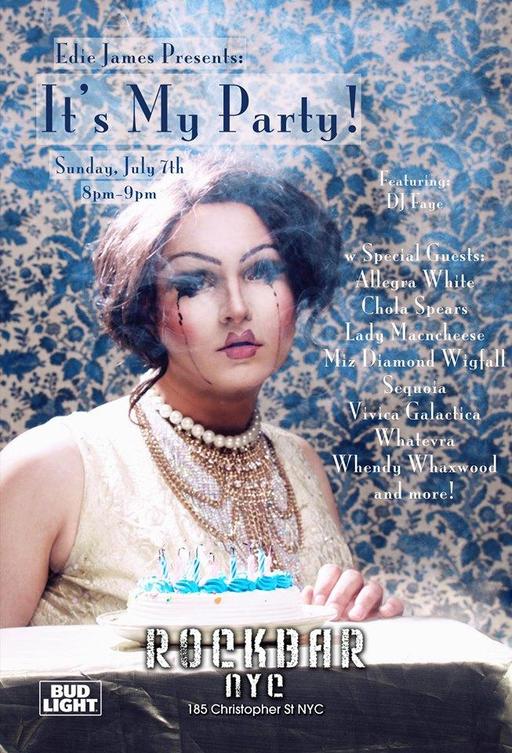 A stellar lineup and sure to be a great show! Anything else coming up for you?

This is sort of all I have on the books at the moment. But let’s just say… I’m always testing the waters for the next big thing!

Honestly, yay! I’ve always been a fan of hers, and want to give her the benefit of the doubt. I can only hope, like with any project, that it’s given the time / attention it deserves!