San Francisco gogo boy turned drag queen of NYC, Virginia Thicc is performer you should be watching. And trust, with her showgirl moves and impeccable makeup skills, the whole world will be doing just that soon enough.

How did your Sunday go?

Great! My partner and I went out to Zavaleta’s show near our house in the East Village and had some drinks. It was a great way to end World Pride.

Sound lovely! And now, we can all go back to “normal.”

It is nice to have things fall back into place!

How long have you been part of the nightlife scene now?

I’m new to the New York drag scene. I’ve been in New York for two years, and just celebrated my first drag birthday in June. But I was part of the San Francisco nightlife scene as a gogo boy for years before moving here.

It was amazing! I got paid to drink and dance on bars in my underwear. Ha! But seriously–there was a nice, small group of us that always danced together, and we still keep in touch. It also allowed me opportunities to travel and dance in Los Angeles, and go to NOLA for Southern Decadence. And I do miss all the free underwear we use to get!

Victoria’s Secret should be sending you stuff now.

Victoria’s Secret is too classy for Virginia;  she needs to be sponsored by the Hustler store.

So what brought you to New York?

I was at a point in my life where I wanted a big change. I wanted to move somewhere I’ve never been, didn’t know where things were at, and didn’t know anybody. So two years ago, my partner and I sold my house in CA and we moved east. And it was the best decision I’ve ever made.

And then, how was Virginia born?

I’ve always been a fan of drag. Growing up in nightlife I was surrounded by queens, and they were always showing me the ropes of surviving [the scene]. I always wanted to try it back home, but was too intimidated. So when I moved here I told myself I would try it, and if I failed it would be okay because I didn’t know anybody. I did it, and fell in love. I’ve had so much fun discovering who Virginia is over this past year. In my heart I am still a huge fan of drag, and Stan a lot of the local queens here and back at home.

Her face is painted like she’s a total cunt, but she’s actually a nice person! I like to describe her as a glamour girl with a little twist. Like, Virginia doesn’t bleed blood, she bleeds red glitter. You know what I mean. She takes something most people find gross, and makes it pretty.

Your makeup skills are pretty extraordinary. How did you hone them?

Thanks. Just lots of practice. When I’m learning something new about makeup, I’m not learning how to do a certain element… but why I’m doing that element, if that makes sense. Like a nose contour–it’s supposed to make your nose look skinnier. But a lot of queens cover their entire nose with their contour color, which has the opposite effect. Once you learn why you are doing something, you can mold it to whatever you want.

Makeup is my favorite part of drag. I love the transformation. If people can’t recognize me out of drag, I feel I’ve done a good job.

You have a coven here of sorts, with Zavaleta and Megami. How did you all meet… and what sort of spells are you all casting?

We are casting too many spells to even list! We all met at the second Polish the Queen finale, where we were all finalists. I remember Megami sitting in the back room wearing a crown made of branches, and Zavaleta wearing one made of doll legs. I liked their drag, and we are all so different… and we just clicked. We would buddy up and do all the local competitions together, and support each other every chance we got. I love them both so much (don’t tell them I said that though, ha!).

You and Zavaleta have been turning it with Maddelynn Hatter for a Sunday night show at The Ritz, called BOOP!

That’s our drag mom! I look up to her so much. It’s going great. It’s from 8pm-11pm every Sunday, so not too late. It’s a family / house show that has a special guest every week, and you can definitely feel that as you watch the show. We always have a great time with the crowd, and party with everyone before and after every show. 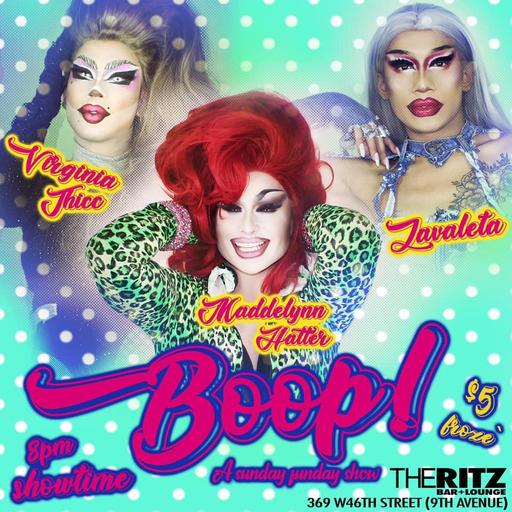 And the three of you just debuted another show recently.

We do a bi-monthly party at the Rosemont, on first and third Thursdays called Trifecta. Each one has a theme, and we have a lot of fun creating looks for each theme and partying all night long. 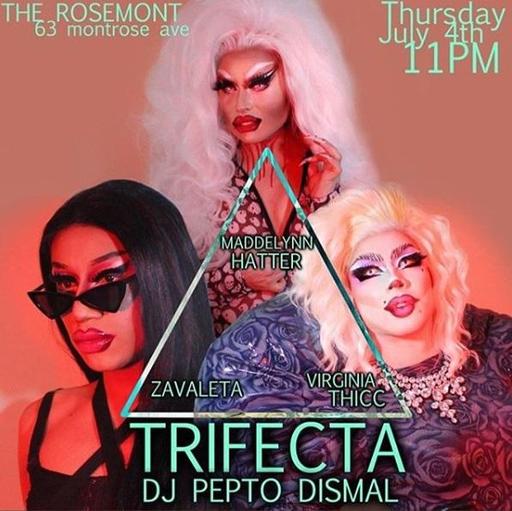 Drag for me is fun, and I’m just going to keep doing that. I’ve been styling some wigs for my friends, so I may follow in my mother’s footsteps and dabble In wig styling.

Werk that hair! Okay, in closing…. do you really think Britney will never record or perform ever again!?

I was waiting the entire interview for this question. She’ll be back! She is the queen of pop! And I can’t wait for her new music!