Thotyssey: Happy Pride, Jon! How is June treating you so far?

DJ Jon ALi: Hi Jim! Happy Pride! June has been a lot, but in the best of ways. It’s been one of my busiest [months], and my birthday was a few weeks ago… so I can’t complain!

Happy birthday! So was Madame X like a good birthday present for you, or are you not feeling it?

I’d say it was somewhat of a gift. I don’t love all of it, but I’m into at least half of it. Madonna will always have a good place in my heart.

I think that’s what a lot of us are saying! Oh, and who has had the cuter singles this season, Katy or Taylor? Although, we shouldn’t be putting them against each other now that they’re friends again!

Haha! Agreed, they’re both allowed to shine in their own right. I personally am into the Katy single more. It reminds me of her Teenage Dream era, which was her best, to be honest.

You are a pretty good authority on pop princesses, but we will get to that later. It’s time for the origin story! Where are you from originally, and what was the first music you remember being really into?

I grew up in Bergen County, New Jersey. I remember being really into all the divas early on, naturally. My parents really shaped my musical taste because they listened to a little bit of everything. Dad was all over the map with the big 90’s dance hits, Brandy, Boyz II Men, Marc Anthony, Prince, Paula Abdul. And my mom was really into the big voiced divas like Mariah, Celine and Whitney. I remember my first CD being Brandy’s Never Say Never, and I knew that whole thing from start to finish. Eventually, I got my own divas to look up to like Britney, Christina and all the other pop girls that came around that time.

Your music blog has been super popular for a ages. How did that all come about?

My blog is my little baby that led me into everything that I do now. I started it in 2006, mostly out of boredom. My parents had moved us to Wantage in Sussex County at that point, and there really wasn’t anything for me to do there. I was just on the internet all the time, and would read all these music blogs that I was obsessed with. I told myself I should start my own, and just went with it. I was sharing music I was into, offering download links (illegally, lol), introducing new artists, and just keeping myself entertained with it all.

I noticed that I had built up a following, and people were coming back every day for new posts… so I basically made it my job to make sure it was updated frequently. Mind you, I didn’t really know what I was doing. Blogging culture was just becoming a thing around that time–again, it was very much a learning as I go process.

Eventually as the years went on, I took it more seriously and refined things in a more professional sense. Labels, PR, publicists and artists themselves were hitting me up to promote their music on my blog–it turned into an actual job. I want to say the real moment I knew music coverage was something I was going to do for the rest of my life was when I got to interview Lady Gaga before her breakout. I’ve never looked back since.

That’s amazing! And I see you spoke to Dua Lipa as well, more recently.

It must’ve been incredibly exciting for you to see artists go on to do great things after speaking to them in the early stages of their careers.

OMG, it was everything to me. It was the validation I needed that let me know that I actually knew what I was talking about.

And I’m assuming that it was the blog’s success that led to your making cutting edge pop dance mixes and playlists for Billboard Pride?

Yes, I’d say so. I’ve never been good at just doing one thing for too long. I like to challenge myself, and think of new ways of approaching what I do. I’ve been lucky, in a sense, that there’s still people who hit me up to say they used to visit my blog when they were in their teens. The blog has led into amazing opportunities like contributing to Billboard Pride, and is very much the foundation of where I am today. 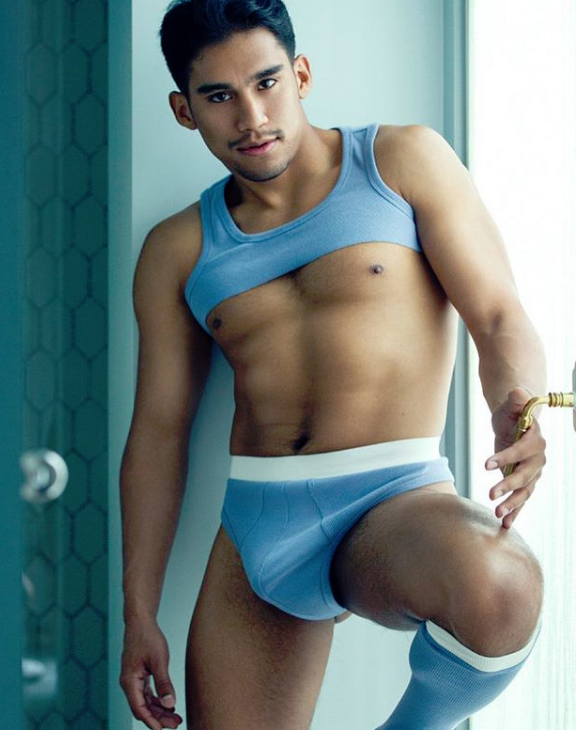 And on a possibly related note, you have one of the ThirstTrappiest Instas out there.

HAHA! Yes, thank you. I take pride in that. It’s somewhat related, yes! My blog, for the longest time, ran a little bit anonymously as “ALi’s Blog.” There was no face to it; I was just blogging, and no one knew who was behind it on the internet or in real life. I kind of was shy, and not really confident in my own skin in my late teens and early twenties to really present who I am. Over the last few years, I’ve stopped apologizing for my accomplishments and have really grown into my skin… so that’s kind of where the Instagram ThirstTrappiness comes into play. I’m done hiding. I know to some it comes off as too much at times, but to me it’s not all that serious. I’m just having fun with it. It’s just pictures, at the end of the day. I challenge everyone else to do the same. Live your truth, haha!

I kind of fell into DJing randomly back in 2013. It was never really part of my “plan” or something I saw myself doing. I had already been running my music blog for years, and my good friend Aaron Pfeiffer–who was a bartender at Bartini and Barracuda at the time–convinced me to try out a night at one of the bars because of my blog and its following. He was a fan first, friend later! He hooked me up with a test run at Elmo Lounge, and I showed up with just my laptop thinking I was The One… but actually was a nervous wreck inside. After that, I ended up at Barracuda on Saturdays, and the rest kind of spiraled from there. I loved it so much and decided to focus on getting better; it was very much a learning-as-I go-process.

And now you’re a rising star in the drag show DJ circuit! You’ve been Hardware’s Sunday night knob turner for a while now, in the booth for the shows Turn It On with JanSport and Rosé (10pm) and The Late Late Show with Marti Gould Cummings (11pm).

Turn It On was my first real dive into drag shows. I was a bit hesitant to do a drag show for awhile, because I just wanted to DJ. But when the opportunity came to join [that show’s original hosts] Monet and Cracker, I couldn’t “turn it down” (see what I did there).

Now working with Jan, Rosé, and Marti, I truly couldn’t ask for a better team. They’re some of the hardest working girls in the city, and it’s been a true pleasure working with them every week. We bounce off each other really well, and I feel like it’s just hanging out with my friends every Sunday. I have a lot of love and respect for them. 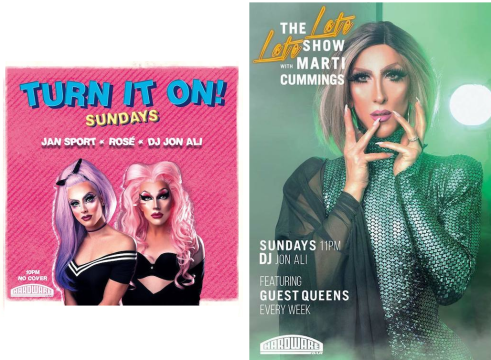 And recently you joined Rosé and Brita Filter for their Boxers Washington Heights show, Thirst Trap Wednesdays. How appropriate!

Haha yes, it feels like the perfect fit. It’s been nice getting to know Brita better; she’s a blast to work with. Rosé and I already have a really good familiarity with each other, so it’s easy in that sense. They’re a really good team. It feels like a different crowd than what I’m used to, so I like that aspect of it. Hoping we continue to grow it! 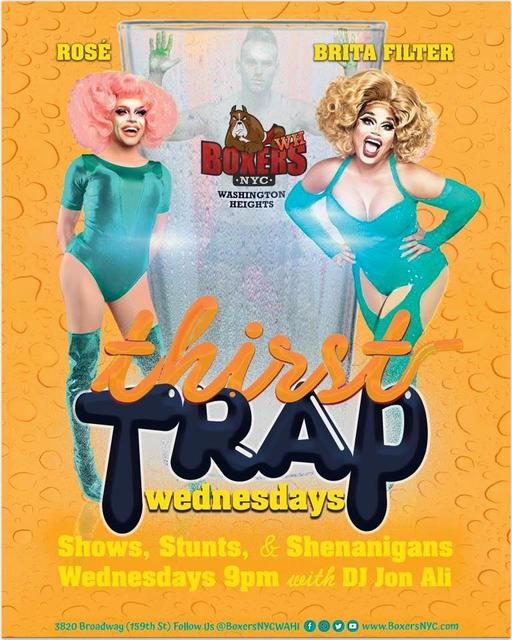 Werk! And monthly on the SoHo House New York rooftop, you’ve been DJing a hit party, Level5! This Pride Friday you’ll be back there for Level5: Diva, featuring BK queen Baby Love and–OMG–of “I Love It” fame, Icona Pop!

I’m so excited for this one. Level5 has been my favorite thing to be a part of this past year. It’s the first party I can really call my own. The team over at Soho House New York has been amazing, and we make sure to turn it out every time with a fun theme. It’s Pride weekend, so we knew we had to step it up a bit this time around. I’ll be opening and closing the night, Icona Pop are joining in for a fun set, and my fave Baby Love has got some super fun “Diva”-themed numbers planned. The weather is set to be gorgeous too, so I expect to see a lot of bodies in the pool and lots of dancing all around. 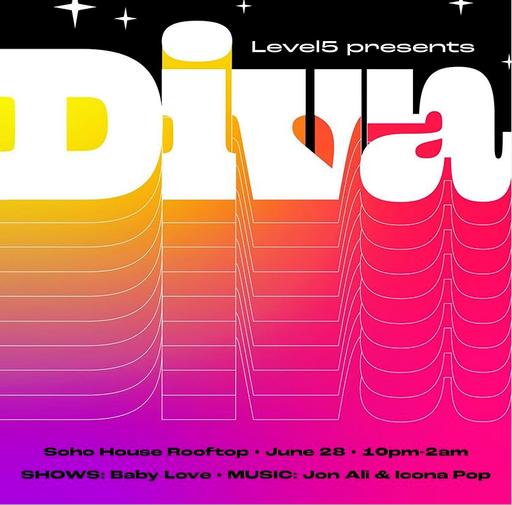 Okay, in closing–and I guess you’ll be the last person I ask this!–what should the children be mindful of as they celebrate World Pride this weekend?

I would say the children should be mindful of others. There’s an abundance of parties and celebrations this week, but remember that not everyone will be celebrating the same way as you. Let’s be nice to each other, and look out for each other. We’re celebrating how far we’ve come as a community, so let’s not forget about the community part. A smile goes a long way!