Brooklyn’s BNA-winning Best Drag King is actually a multi-faceted performer who both mashes up and transcends gender and genre. Fighting for recognition in a scene where still only one type of “mainstream” drag is widely accepted, the gloriously macabre God Complex is about to give us a showcase that fully exposes their talent, their truth… and of course, their horns.

Thotyssey: Hello, GC! Thanks for chatting with us tonight! How was your Brooklyn Pride?

House of Yes was the kiki, apparently. And of course this is a super-Prideful month… are you excited about participating in World Pride, or is it all just gonna be a bit too much (6 million people!)?

I am extremely happy to be a part of it in some small way! Mine is the dive bar art freak experience of World Pride, I suppose. Also, I’m not so good in large crowds.

You and me both! So, we got tons to talk about, but we better start at the beginning! Where’s your hometown, and what were your earliest artistic interests?

Native New Yorker, technically! I lived for a while in Queens, but my parents moved to Connecticut when I was still pretty young.

I was thrown into a million different things (including harp lessons!), but dancing—specifically ballet— was the only thing that really stuck until I was in middle school. Though I’ve always had a slight knack for visual practices, too. I kept doing ballet (and many other dance forms), but my interests spread to other performance fields, as well (read: theater).

Who or what were your strongest artistic inspirations growing up?

First and foremost—Bowie. He has been an idol of mine since I can remember, and remains so. I was also really into Madonna, and 80’s British punk and club kids. I tried to be like them–but in my failure, ended up being something like a MySpace scene kid instead. I was a huge fan of Tim Burton and Jim Henson movies —especially Labyrinth and The Dark Crystal. Pee-wee and cartoons like Ren & Stimpy, Courage the Cowardly Dog and Robot Chicken were my TV staples.

I can see how all of that would ultimately create a drag artist! How did you first become the devilish God Complex?

It’s funny, because people often ask me if my drag is a rebellion against some deeply religious upbringing. I actually had a fully secular childhood.

The truth is, I wanted to be a Satanic Mechanic for Halloween some years ago (lifted lyrics from “Sweet Transvestite“), so I went out and got myself some prosthetic horns and a red dickies jumpsuit. I ended up going to a party with a friend that turned out to be extremely straight and extremely boring and people kept asking me what I was, over and over and over again. So eventually I just started saying “I’m God.” The last name came about a year later, when I resurfaced him for Bushwig (as an attendee).

That’s a great debut! And when did you actually start performing?

I’ve been performing in general for truly my whole life, but in drag as Plex— my first show was In January of last year, so just coming up on a year and a half. Which is crazy to me. My life has changed so much and so quickly in that time.

Now you are performing all over Brooklyn! What’s a “typical” God Complex performance like… what do you serve the children, and what do you wanna accomplish onstage?

Oooo. A God Complex performance usually blends the perverted, profane, and obscure with iconic pop culture. Blood, evil babies, and confetti are frequent visitors in my acts. When I’m devising new stuff, I think about queering the depraved and shaping my own version of masculinity/ king-dom. He’s a very faggy demon. Most of all, I like to have secrets that I get to tell (or show) the audience while onstage.

There is a rising movement in Brooklyn of performers who combine drag, burlesque, cosplay and performance art, and who both play up and neutralize gender concepts simultaneously: folks like yourself, Theydy Bedbug, Sweaty Eddie, Mx. Feelings…. it’s safe to say that this could be the future of nightlife performance.

We are taking over! I’m biased, but I think the performers you mentioned (and many others like us!) are sparking an important shift in drag and performance. And I hope I can have a small hand in making that happen and getting folks to recognize and SEE us! A lot of these performers are skilled, cross-disciplinary artists who work in the art and performance world even when they’re out of drag. And here in Brooklyn, it really feels like multi-hyphenate, genre/gender bending artists are at the forefront of nightlife performance.

Do you feel like there should be a new name for the kind of performance you all do?

Not really… I think each individual artist can call themselves whatever they want. The thing that pulls us together is that we’re all trying to do something that has rarely or never been seen before, so it feels counter to lump us all under a single umbrella with a specific category or name. Because at the end of the day, we’re still all doing radically different things.

On that note, belated congratulations for winning Best King in this year’s Brooklyn Nightlife Awards! How did that win feel?

Thank you! It was fucking awesome. It is a good feeling to be recognized by one’s community. And damn, we had some fierce competition–all three of the other king nominees are absolutely fantastic .

What do you think is the biggest challenge facing Brooklyn nightlife today?

I think there is still a great deal of misogyny and trans-misogyny around BK nightlife, both from the perspective of a performer as well as an audience member. Often, it is hard to feel welcome in a space/group of people that emits “you don’t count” energy. It takes a lot to be considered, recognized, or seen as a non-cis-male performer, and even more so if the gender performance you play with isn’t exclusively “femme.” I am pushing for the day when trans, non-binary, and otherwise non-cis-male performers are given the time and space we deserve — We work so damn hard! I want our shows packed, I want us being offered the big gigs, I want to see us in editorials in Out and Vogue, too!

I do think this is slowly, slowly starting to happen. There are some incredible folks with sharp chisels in hand making shows that focus around these kinds of performers – like Theydy Bedbug’s “Wannabe,” Junior Mint’s “In Living Color,” Rara Darling and Angelica Sundae’s “Snack Theater,” and my show next week, to name a few! The landscape is changing, we just have to keep working at it.

Yes, we could be on the eve of something great! Which brings us awkwardly to… RuPaul’s Drag Race! You hosted this past season’s viewing party at The Well along with Zalika Parsons and Pinwheel Pinwheel. Other than Yvie’s worthy win and some cool bits from our local representing girls, it was a pretty uninspiring season… right?

Yeah. I honestly wasn’t there as much as I should’ve been. And while Drag Race can be really fun, it’s pretty painful to watch something that is the epitome of that “you don’t count” energy.

Do you think Ru will ever crack and broaden her definition of drag to represent the changing times? Or do you think maybe some new show is gonna come along and do that?

I’d like to say she will, but it really doesn’t look like it. Dragula is certainly more open, but to be honest I’m not so interested in how they push the physical limits of the bottom performers (even when there’s contractual consent involved).

Yeah I didn’t love seeing poor Erika Klash go through that last season! But fortunately, Brooklyn venues aren’t making us shove pins in our arms… yet! On Sunday, you’ll be back at The Vault with your “Unforgiveable Emotional Carnivore” monthly co-stars Pinwheel Pinwheel and Menthol! Isn’t the Vault such a great new venue in Brooklyn?

Yes we love The Vault. It’s somewhat accidentally a perfect venue for the weird world of “Unforgivable Emotional Carnivore.” 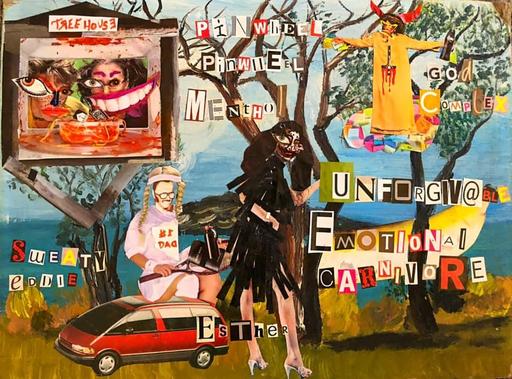 And June 19, you have something massive and demented coming our way, along with Angelica Sundae, C’Etait BonTemps, Anna Monoxide and Shanita Bump. Tell us about “Wrath of God!“

YES! June 19 is my Evil Pride kickoff sabbath, Wrath of God. It’s happening at Saint Vitus, this incredible metal bar in Greenpoint. I’m so excited for it—the entire night is a big, dark, ritual spell to usher in our queer ancestral spirits for Pride. There’s gonna be drag, sideshow, vendors, merch, gogo, incredible raffle prizes, blood, sacrifices, evil bbs, etc. All of these things are an offering as component parts of our ritual. I’ve been wanting to build this show for some time, and I’m beyond stoked that it’s happening next week! Tickets are available online right now, and of course at the door. Looks are encouraged and rewarded. 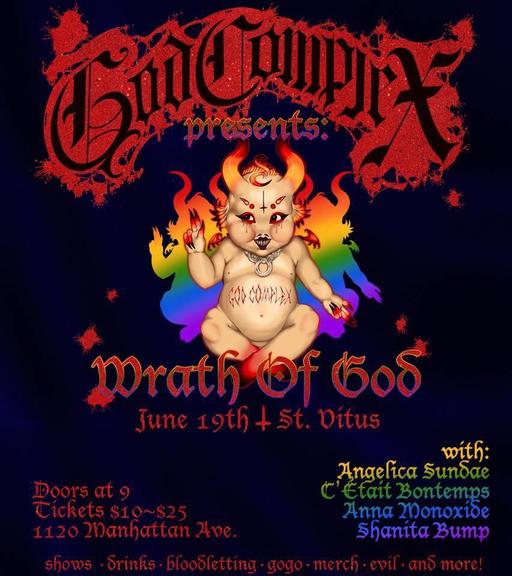 Sounds right up my alley! Anything else coming up for you?

I’ve got a couple shows lined up as Pride approaches, and then I’m off to an artist’s residency. So catch me before I go! You’ll find that info on my IG.

Lastly: as World Pride and the 50th anniversary of the Stonewall Riots rapidly approach, what would you like the world’s Queer Children to be mindful of?

We are, and can be part of, the legacy that the black and brown trans heroes like Marsha P. Johnson, Sylvia Rivera, and Stormé DeLarverie (who was not trans identified) began— so long as we listen to each other and think beyond ourselves. We have to stoke the fire of action when we are called to do so, and I am compelled to think that starts with offering kindness to ourselves and to the unbelievably vast spectrum that is our queer community. We have to hold the doors open for each other. And it can be hard, but sometimes that means sitting down or clearing the floor so that someone else can walk through that door ahead of you, or so at least someone else can stand up and be heard. We have to elevate each other.

Thank you GC, and happy Pride!