Your current reigning Mr. RockBear returns to the venue that sashed him this weekend to host a super sexy affair. Thotyssey goes to the dark side with Gaymer Extraordinaire and sexy Bear Bae Kory “Darker Link” Harmon!

Thotyssey: Hello, Kory! So, I understand you just came back from a photo shoot.

Darker Link:  It was for this LGBT gaming site we are launching to provide representation for LGBT+ Gamers (aka “Gaymers”). This company called G Fuel (an LGBT ally) provided some of their products to advertise on the site. The site should be live in the next week or so.

Right now? That’s would have to be Spider-Man for PlayStation 4. Just the web-swinging alone is fun for me.

Nothing like a good slinging! Speaking of which, how was your Urban Bear Weekend?

Oh, it was a great weekend. The Bears Ahoy boat party and the Urban Bear Festival were really fun. DJ Dandylion and My hubby DJ Ted Bishop turned that boat party out with their beats.

Are you native New Yorker, or do you come from a bear cave from far away?

I was born and raised on Staten Island; I guess that can count as a cave, lol! I left when I was 18, and moved to Brooklyn. I have lived in every borough except Manhattan. Currently I’m living in the South Bronx, though.

When did you first discover the bear and leather scene(s)?

I was introduced to them by my best friend John-John Punki in 2011-12. He brought me to The Eagle NYC and Rockbar for the first time, and I really just felt like this is where I belong.

Did you meet Ted in one of those bars?

Actually, Ted and I met at G Lounge, at a Monday party called N3RD Night. I was talking to someone at the time, so it was really just an introduction meeting. But we would cross paths again at a friend’s birthday party. We didn’t even remember meeting each other the first time, hahaha! Gay Culture. A month after that, we started courting and dated, and the rest is history.

Was Mr. RockBear your first bear or leather competition?

Actually, I haven’t done a leather contest. I’m still on the fence about doing one. But competing for Mr. RockBear was my first competition. Bear titles are a little different than a leather title, but everyone’s title year is what they make of it. No matter if it’s a bear title or a leather title, the energy that the title holder puts into their title year is what matters. Some people just have the title and relax with it, and then there are some that use it to help out the community.

Lots of people unfamiliar with these contests don’t understand the community aspect of the scene, and how in many cases the title holders do in fact become figureheads for benefits and charities that help the queer community at large.

Yes that’s very true and important. With the current state of our government, we all need to look out For each other.

When I got into my 30s, I found my self-worth… and with my title year, I’m focusing on self-worth and body positivity. We all should look in the mirror and tell ourselves “I’m beautiful, I’m sexy, and as long as I see it in myself, then that’s all that matters. Other people’s opinions are just their problem.” That’s not to say I don’t have a bad day and feel self-conscious, because that’s normal. But at the end of it all, love yourself first and everything else will fall into place.

Amen! So, what was it like to compete and win Mr RockBear this past year?

Honestly, I was an anxious wreck during the competition itself. But I think my favorite memory of the competition was the interview with the five judges, and then the Meet and Greet afterwards which took place at Rockbar during Robert Valin’s Bears Night Out party (he’s also one of the RockBear producers). I was very humbled when I won, because my running mates are all great guys and I think we all did an amazing job. To quote Paris is Burning, “it do take nerve!”

By the way, I’m sure this is betraying both my age and my Nerd Card, by why do we call you “Darker Link?”

Oh, well, the Legend of Zelda is my favorite video game series. My original Instagram account was called Dark Link, named after one of the antagonists from the Zelda games. My account was hacked years ago, and I couldn’t get the name back… so I just made a new one called Darker Link. Also, I had started finding which fetishes and kinks that I really like, so I used the page to reflect my “mild to wild” side!

Which brings us to “Purgatory,” the sexy Rockbar monthly that John-John and Ted created, and that you host now.

I took over host responsibilities from John-John in January, as his political career is really starting to blossom.

What’s his role in politics?

John is the LGBT liaison to Speaker Corey Johnson. I know that, currently, he’s working hard on this year’s Pride events, since it’s the 50th anniversary of Pride and World Pride.

“Purgatory” returns to Rockbar on Friday, May 31st. Tell us more!

This month’s party will have some darker, sexier beats, and our friend and designer Kip (creator of K-Straps) will be there selling his fetish wear for those looking to embrace their kinky side. We will have a dark room, and I’m providing some choice porn (can I say that? Hahaha) videos to play at Rockbar from my own collection. Also, with the weather getting nicer it will be a great chance for people to dance if they want to dance, and find a hottie or two to make out with and take them to the dark room…with consent, of course! 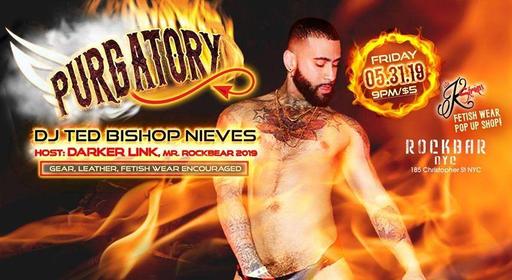 Sounds like it will definitely be a memorable night! Will you be with the current-reigning Mr. Fire Island Bear, aka your hubbie Ted, as a new Mister is crowned on the Island on June 7th?

Yes, I will be with Ted for his step down to sash the next Fire Island Bear 2019.

And a you said earlier, World Pride is nearly upon us! What are your plans for that weekend?

I’m planning to walk with my sash and represent Rockbar in the parade, with the Eagle NYC and NYC Leather contingent. [And before then] I will just be talking with people about the bar, promoting their Pride events to the best of my ability. Rockbar has some fun parties planned for June, and I can’t wait to see it packed with sexy people living and enjoying themselves.

Should be an amazing summer! Okay last question for the Gaymer: do filmmakers really need to redo that Sonic the Hedgehog character design  for the movie adaptation? Is it that bad?

Just throw the whole character design away and let an actual gamer do it, hahaha!