The journey from pointes to stilettos has been a long and storied one for this performer, who despite being a part of NYC nightlife for over a decade is still very much a new drag queen. Alfredo Solivan chats with Thotyssey about his ballet roots, working in bars, befriending Bob the Drag Queen, quitting one major pageant and nearly winning another, and how 2019 became the year of Free!

Thotyssey: Free, hello! Thanks for talking to us today! It’s maybe the first glorious day of the season, I hope you’re enjoying it!

Free: Hey Jim! It is beautiful outside, but unfortunately I’m at work as we speak… so I’m not enjoying it much. Although, the nice cool air conditioner here at Industry is great!

That’s right, you barback at Industry.

I remember you also used to work at Pieces, previously. Coatcheck?

Actually, I was security at Pieces for almost seven years.

Oh I always thought you were coatcheck (that’s been my gig)! You helped me find my favorite hat once, that’s why.

Well regardless, you’ve been a part of the nightlife scene in New York for awhile now.

Where are you originally from, and what brought you here?

I’m from New Jersey, originally… only about 30 minutes away. I’ve been commuting into the city since I was 15, but officially moved in when I was around 22. I used to be a ballet dancer and right after high school started working for a ballet company, Dance Theatre of Harlem. I was with them for a few years before being let go and becoming a freelancer. That’s when I started working in nightlife.

Do you still keep up with ballet at all?

No, unfortunately. I had to retire when I was 30 because of injuries.

Sorry to hear that.

It’s no big deal. Feels like a lifetime ago.

But it’s great that you now have a new way to perform!

Yeah, that’s a big reason why I started drag. I needed a new creative outlet.

How did you become friendly with Bob and other NYC queens?

Working in nightlife with them. It’s hard not to get to know the people you see multiple times a week. I met Bob specifically while working at Pieces. He had a short-lived show there on Sundays, and we’ve been best friends since.

Did you immediately start wondering what it would be like to do drag yourself back then?

Of course! Blackie O was the first person to put me in drag, and that was a few years before I’d even met Bob. But Bob and I are the same size, so I was constantly putting on his drag. Still do.

It was a very exciting time here when Bob was on Drag Race and ultimately winning, and also having New York queens Thorgy and Acid Betty on the show with him.

I cried twice while working at Pieces. Haha! First at the reveal of the cast, and then again when Bob was crowned.

Now, it’s basically expected that NYC queens will be on each season… but back then, it must’ve been both very surreal and wonderful to see your best friend on TV every week.

Yes, it’s not as exciting now. But also I think Bob, Thorgy, Acid Betty, Monét, Dusty and Bianca had a bigger presence in NYC nightlife. So, that feeling will come back when the likes of Tina Burner, Pixie, and Kizha are on the show. If ever.

You had a YouTube show, Gaymerama, where you played video games with dedragged queens. That was fun! I bet a lot of work went into that, though, even with its simple premise.

Oh, girl. That was so much work for one person to do. I did 13 episodes before I was worn out. I got some great queens to play with me, though!

Times have certainly changed, but I wonder if a decade ago you were being discouraged from doing drag because you were “trade” and would somehow “lose” your sex appeal?

A decade ago, I was way too busy dancing to even think of starting another career (drag in this case). But after retiring, I honestly don’t know why I waited over a year before starting drag. I don’t think my Instagram “trade status” had anything to do with holding me back. But who knows?

So, Free the Drag Queen is only about a year old.

She’ll be a year old in July!

What were the circumstances that finally got her born?

She was born from the Rite-Aid near my house. At first, I just wanted to practice painting my face. I had seen so many queens paint, and was wondering how well I could do it just from watching. The answer was: not well. And it just snowballed from there. Bob was like, “If you paint your face again, you’re leaving the house.” And I did.

And where was your first actual performance?

Barracuda for Star Search. Bob forced me to do it super-last minute. I didn’t have a number prepared at all. I just did a straight song. Bob is kind of a bully.

So, how would you describe a Free performance today for the uninitiated?

A Free performance is just that: free. You didn’t pay to be here, so you get what you get. Haha! I’m kidding again. I like to think of my performances as funny / clever. And others agree… sometimes!

Do you have a favorite number that you do?

Right now, my favorite is my “Alien” number. It’s Kate McKinnon from SNL talking about her alien abduction… mixed with music, obviously! There’s dancing. There’s a reveal. And first and foremost, it’s funny.

Eventually, you also competed in the Ultimate Drag Pageant… but it was a negative experience for you, and you publicly quit the competition. What actually happened there?

Oh, that. Haha! I didn’t agree with the premise of the competition: that in order to get votes, you had to bring friends… but in order for them to vote, they had to spend the $20 minimum. So essentially, the person who spent the most money got the most votes. And that really hit home when Lemon and Vivien Gabor were in the bottom and up for elimination, when they had no reason to be based on performance. So the next week, I quit.

This year, you had a much more positive experience with Miss Barracuda. You got Second Runner Up!

Yeah! Miss Barracuda was a really great experience. I was so stressed every single day for over a month. Haha! Honestly, I really, really wanted to win… and really thought I would! But I’m so proud of all the work I presented. Literally wouldn’t change a thing.
It was the first time I’d ever sewn anything, and I ended up making half of what wore for the competition. And everyone from the judges to the other contestants were so fantastic.

It’s an extraordinary accomplishment for a young queen!

And Saturday, May 25th, you’ll be doing yet another high profile drag competition: Lady Liberty at the Ace Hotel! Always one of my favorite events, and it’ll once again be hosted by the dynamic duo Brita Filter & Rosé. What do we have in store from you?

I have no idea! Haha! I’m kidding. I have my number worked out. But in terms of what I’m wearing, it’s all still up in the air. I have this one idea that stuck in my head for the runway (the theme is “camp”), but I don’t know if I can actually accomplish it. If people get my humor though, this number will be very funny. 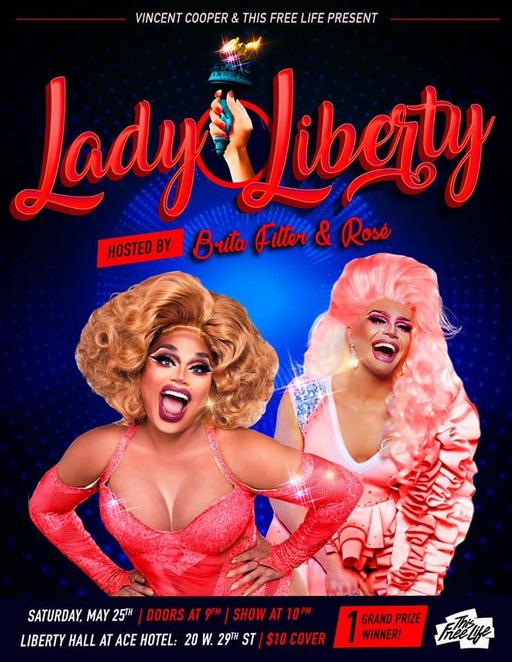 I’m sad to say that after Lady Liberty, I don’t have anything scheduled. Hopefully more guest spots. I’d really love a show all my own. I have so many ideas in my head about looks I’d like to do. Most of them will happen!