Actor, dancer, makeup artist and fashionista, this queen is one pf the most visible and entertaining representatives of the new wave of drag sweeping over Long Island. LaBelle and Thotyssey dish on the LI scene, the Met Gala, “The Cher Show,” “Drag Race,” how she got here and where she’s taking us/

Thotyssey: Hi, LaBelle! Thanks for making the time for this! So, I see you’ve just wrapped up starring in a Long Island production of A Funny Thing Happened on the Way to the Forum…  how did the whole run go, and who did you play?

LaBelle: It was great! It’s one of my favorite shows, I’ve done it several times. I played the dance role of “Gymnasia,” a courtesan at the House of Marcus Lycus in ancient Rome.  The role is normally played by a woman, but it’s special when done as a drag role. I love playing her, and was happy to do it again!

We all know you as an amazing dancer and makeup artist, but have theater and stage acting always been a part of what you are?

Yes. I’m a “theater queen!” My love started when I could walk. My mother and father met doing it, and I just followed suit.

Where’s your hometown, by the way?

I’m in Amityville, Long Island. Yes, that Amityville! And no, the house isn’t haunted!

Ha! It looks a lot less scary in real life!  I’m assuming by your drag name that you are a huge Patti fan?

I am… but actually, it’s part my mother’s nickname and our last. I think it has an elegance to it.

It certainly does! And how did you beginning performing in the nightlife end of things?

Well, I’m sure most of your followers may have heard of a long-since-retired drag queen, Dallas Dubois ( who I’ve known since before she got out of high school). She was having a final show out here at the Long Island Eagle Veranda about six years ago. And after seeing me in a production of LaCage, we spoke about possibly doing a show she had in the city. Finally, after a few months, she messaged me and said “I’d like you to do my final show,” and that’s where LaBelle was introduced.

One queen exits, and a new one is born! How would you describe your performing and aesthetic style as a queen today?

I’m old school in style and design. Very pulled together. Whereas others have to commit to a Look, I appear as a person! I’m very Disco On Broadway Girl. Same goes for the songs I choose… they have a story, I just act them out with an occasional high kick and splits, and covered in stones! And I’m very rehearsed. Not that it matters, because things may change while I’m doing it. But there’s always a beginning, a middle and an end.

Do you have a favorite number to do?

Not really. I like them all. But it depends on my mood, as to what will happen the week of the show.

These days, you’re known mostly as a Long Island queen. Gay nightlife and drag have had their ups and downs in LI, but we’re definitely having a Drag Moment there now. What do you think has changed?

The audience. You see, gay people are used to drag shows… especially when you go to a big city like New York or L.A that has a Gayborhood. They’re used to it, so it’s not an Event like it used to be. Out here, believe it or not, the straight audiences live for it, and ask for it.

It has a lot to do with we as the LGBTQ community actually living normal lives. Every one knows someone who is gay, so there’s not as much of a stigma. Now, don’t get me wrong…. there are still not a lot of places [in LI] to see the art form. But the places that do it get packed out. Partly because it’s not a weekly thing, so when a show is advertised, people wanna come.

I see many LI queens–you especially–supporting and promoting each others’ shows. It’s inspiring to see that you all understand that when everyone’s nights there do well, and drag stays on peoples’ radars, then that’s good for you and for everyone!

Exactly! We all know that if we can work together, it opens so many doors and opportunities for all of us. We out here don’t back-bite each other. We believe in lifting each other, and the community, up. We believe in giving each other support. If you succeed, we all succeed!

Coming up in LI, as you’ve been recently promoting, we have a Drag Coffee Hour at Sip This in Valley Stream on May 10th, and later a big drag revue hosted by Alexis Flame and Toni Homeperm–along with the Long Island Gay Mens’ Chorus–at the Sayville VFW on May 17th.

As for yourself, you’ll be in Sayville on Saturday, May 11 for Irish Exit’s monthly queer party, Alchemy! Have you done that night before?

Yes! Pete Vigs and Micheal Joseph started doing Alchemy back in January of this year. I got an invite to come to the second, and I just started promoting them to those of us who live more west .So I a got dolled up, grabbed a friend to go and take pictures as soon as we walked in–there had to be at least 150 people there. As the night went on, the crowd got bigger and bigger! By the time we left, there had to be at least 300 patrons!

Shortly thereafter, I was asked to be their coatcheck / hostess at the last one, and we all had a blast. And because we don’t have a lot of places to host LGBTQ events. everybody from all over comes out! 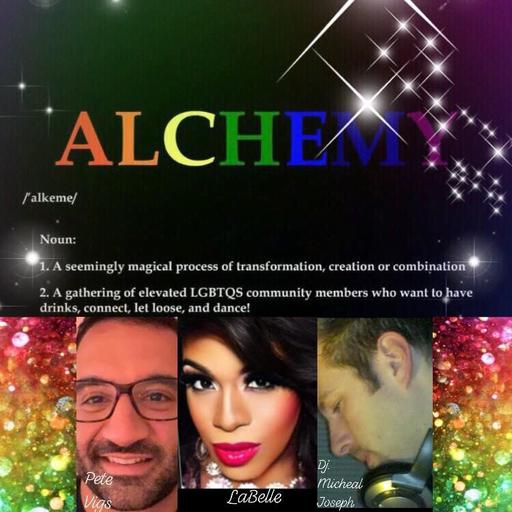 Looks like a fun night! And if I’m not mistaken, in your Day Life you work at the essential Abracadabra costume shop in the city.

I’m on call for the wig department. What that means is, if they a custom wig job, I go in and work some magic. You’ll find me there regularly when Halloween approaches. But I’m a jack of all trades! Whatever they need me to do or sell, I can.

Mostly, you can find me at the Merrick Theater here on Long Island costuming, teaching the children to dance, and many, many others jobs!

Gurl, you’re busy! It must be hard to fit in more LaBelle performances with a schedule like that.

There’s many things happening for me on the horizon. Besides the Alchemy party this Saturday, I’m a regular cast member of my drag sister’s show “Ivy Stalls‘ MADNESS“ at One Eye Jacks in Bethpage every month! You can catch me with Olivia London Productions, a new producer of drag entertainment here on the Island. I’ll be live on Facebook with Toni Homperm in her new show featuring all of us Long Island cabaret queens. And hopefully I’ll pick up a show or two here in NYC… I haven’t been on the cities’ stages in awhile.

We’d love to have you here! So, any thoughts on these Met Gala looks that you’ve seen? The Gay Police are up in arms because they are saying many of the attendees did not do the assignment for the “camp” theme. Can anybody really do that better than drag queens, though?

They can if their friends are theatrical drag queens and costume designers! Lol! The thing is, everyone has their own interpretation of what “camp” is, and don’t live in that world… so some are bound to miss that mark.

True! There were a few cute looks, though, but lots of duds! And as the Disco Broadway Babe, what are your thoughts on The Cher Show being snubbed for Best New Musical by Tony voters?

I have seen The Cher Show, and I think it’s fine. You can’t have everything! But it was nominated for Best Costumes, among others. It will also do well with tourists. They literally brought her Las Vegas show to Broadway, but with a book that’s actually good! I think the people who had misses on the Gala carpet should’ve gone to see The Cher Show to get an understanding of what “camp meets art” is.

Couldn’t agree more! Who should win this season of Drag Race, now that we have no more NYC girls in the running for the first time since 2015!?

I’m gonna sound like a terrible drag queen, but I don’t watch Drag Race. I stopped around Season 4 or 5. So, I don’t know much about who’s there, or who went home when. Truthfully, I’m not a fan of what the show has become to the viewing public. That’s just my opinion. But what I will say is, to win Drag Race… you have to remember that it’s TV! You have to have a made-for-TV personality! Or if you get kicked off, have a plan to do more with your drag when you come back to the real world. Create a show or opportunities for what it is that you do, and run with it!

Teach the children well! Okay, so to close… is there anything else the children should know about Ms. LaBelle and Long Island drag?

Well, first let me say thank you for all you do… especially for us out here on the Island. It’s greatly appreciated! And thank you for talking with me!

I always say support local artists! People tent to bypass Long Island for Manhattan Island (even though you can rebuild NYC a hundred times over on our land). And when the summer comes, Fire Island is where there’s lots to see and do here. But we’ve got theater, dance companies, orchestras, and so much more. With that, I hope to see all who read this out here, and I wish you all Peace, Blessings & Glitter/ Always.

Thanks so much, LaBelle!