A true standout amid the crop of new performers emerging now in Brooklyn, this queen is gagging the children with unique performances and lewks, and has already begun producing their own showcases. Please tie balloons to your hair as you prepare to gobble up this sweetly refreshing Junior Mint!

Thotyssey: Hey, Junior! So, the Brooklyn Nightlife Awards happened… I sadly missed most of it due to having to go out and produce Viva Variety, and you weren’t able to go at all. But clearly The Rosemont was the big winner of the night. It won Best Bar, and many of its performers, parties and staffers won their own awards. This was a big upset to the standard of Metropolitan Bar winning everything for at least the past five years, and maybe a sign of changing times! What are your thoughts?

Junior Mint: They’re both amazing bars, and you can tell by all the nominations they got! I think that by The Rosemont being a bit deeper into Brooklyn, it services a part of the queer community that hasn’t necessarily been afforded a stage or venue that allows them the opportunity to experiment with new material, through open sets and new productions.

Personally, I have my own experiences of performing at open sets when I first started drag at The Rosemont, and meeting people who have become amazing friends to me now. The Rosemont is where a lot of my friends and the community have gotten the opportunity to produce for the first time, and it’s becoming more and more of a community / home bar for a lot of people.

True all around! And yes, location is everything… which brings us immediately to your original story! Where are you from, and how did you begin as an artist / performer?

I was born in Philly, and lived in a few places up and down the east coast. But my family is all based around DC now. As an artist, I started off in a band. I was a flutist, and then in high school it turned into a love of theater, specifically technical theater. I ended up going to Emerson College and got a BFA in Scenic Design. I got the chance in college to really discover my love of painting, myself, and drag. That really ignited the passions that formed Junior Mint.

Through all of my artistic endeavors, besides playing flute, I never performed on a stage besides sitting down. So when I moved to NYC in 2017 and got to experience the Brooklyn drag scene first hand, I became obsessed. People getting the opportunity to be authentically themselves made me want to do the same. So in June of 2018, Junior Mint was born in a drag competition… and the rest was history!

How did you drag name yourself?

My name outside of drag is Junior as well, and I knew that I wanted it to be a part of my drag name. For a bit, I went by the name Junior High, but it didn’t feel right with my personality. Then one day it hit me when I was on the phone with my mom, I remembered how she would call me her “Little Junior Mint” growing up… and I’ve been Junior Mint ever since! When I told her the idea, she just went “THAT’S IT!”

Adorable! How would you describe your drag now to those who haven’t yet seen it?

I’d say, it’s the same amazing Junior Mint receive you know and love, but with a new empowered, intersectional, and inclusive recipe! My drag is in the business of making you feel good about yourself through connecting with laughter. I’m very comedic, and my drag is rooted in my identity as a Black, Trans-femme, queer person. With most disenfranchised groups of people, humor is a way to cope and process a lot of the traumatic situations we’re in, and it was no different for me.

Drag is an opportunity for me to connect with everyone in the space by dissecting and making a mockery of the systems and people that disenfranchise, and affect everyone’s lives. If you see one of my acts, you’re guaranteed to walk away understanding a bit more of what it’s like for someone else to live life, while laughing the whole time.

One of your best known visual elements in your performances is the balloons you often have tied to the ends of your braids. You pop them with your hands, and they contain surprises like colored water or glitter. How did you come up with this interesting device?

It was a fun mix of elements that brought about the balloons! So I knew I wanted to incorporate my own hair into my drag, because it’s very uncommon to see hair in drag glorifying the beauty of Black people’s natural hair. And that idea collided with my craving to be one of the girls in elementary school growing up that could have all the jangling balls and beads in their hair–the type of girl you could hear walking down the hallway! Once I came up with balloons, I was nervous that they’d pop, so then I thought “make it fashion”… so if they ever popped, it looked like a reveal. It’s now become a fun game of what can I put in them next!

Would you ever incorporate the flute into your performances?

I’ve thought about adding the flute… but I think if I added it, it would definitely be inspired by Lizzo! If I had her in my band class growing up, I probably wouldn’t have put it down in the first place. What she does with the flute is outrageous!

“This one time in band camp…”

Ha! American Pie was one of my favorite movies growing up!

You made it to the finals of MR(S) BK this year! And you also won a prelim of Blvck Lae D’s competition at Dromedary a few months ago. How did you enjoy the competition experience?

Performing in the competitions has been such a beautiful opportunity for me to really push myself and my art, as well as meet amazing performers throughout Brooklyn. I’ve really enjoyed getting to be inspired by what everyone else brings, as well.

And you’re one of the busiest queens in Brooklyn right now. Every Thursday this season, you’re hosting a Drag Race viewing party at The Graham with Sassy Frass. I feel like you must be #TeamYvie!

I am very much Team Yvie! I wasn’t at the start of the season, but as soon as I saw her fringe outfit, I was SOLD! 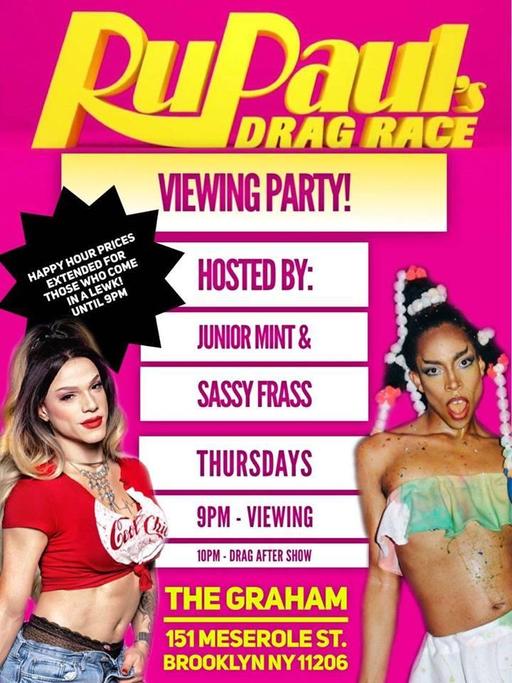 And just this past Wednesday you premiered a new soon-to-be-weekly show that you are hosting and producing at The Gradient: “In Loving Color!” What do you hope audiences “get” from it?

“In Living Color” is a queer experience that colors outside the lines of every binary imaginable. The show redefines what you know about drag with jaw-dropping and enlightening performances. I curate a cast of drag artists that showcase the beauty, art, and talent that comes from the diversity within our community. This past Wednesday Thee Suburbia, Theydy Bedbug, Emi Grate, and I gave shows and DJ HardCandy provided the tunes!

What I hope most is that the audience walks away with is a better understanding of how deeply diverse and rich the queer and drag communities are. And I want the performers to walk away feeling respected, valued, and supported. It’s been an amazing experience producing my first solo show, and I’ve already begun to plan on how to make it bigger. Keep an eye out for more updates! We’ll be returning on May 15th, and will be every Wednesday! 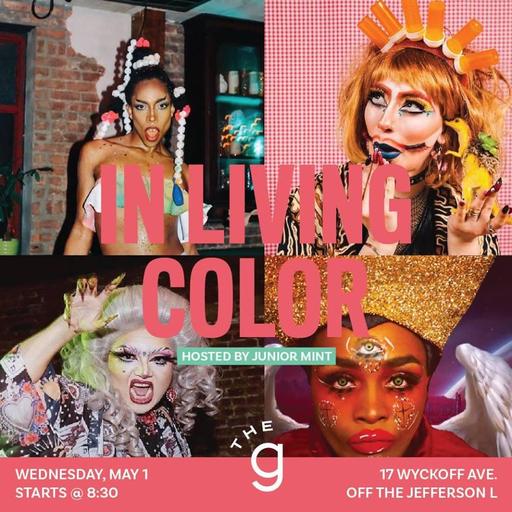 And on Saturday May 11th, you’ll be at Chelsea Music Hall for Snack Theater, which I believe to be a sort of circus / drag / theater production curated by Rara Darling and Angelica Sundae! What’s that gonna be like, do you think?

Yes, I’m very excited about getting to be a part of it again! I would say it’s all of that plus more. There’s also burlesque, narrative, a runway contest (which C’etait BonTemps and I will be hosting), etc. Its such a brand new type of cabaret experience, and the venue it’s at lends itself to an immersive and wide variety of performances. Together, Rara and Angelica really flip the idea of what were used to getting out of a cabaret on its head. For the next show, it’s theme is “Let Them Eat Cake.” so you can probably expect opulence, decadence, gluttony, and maybe a beheading or two! 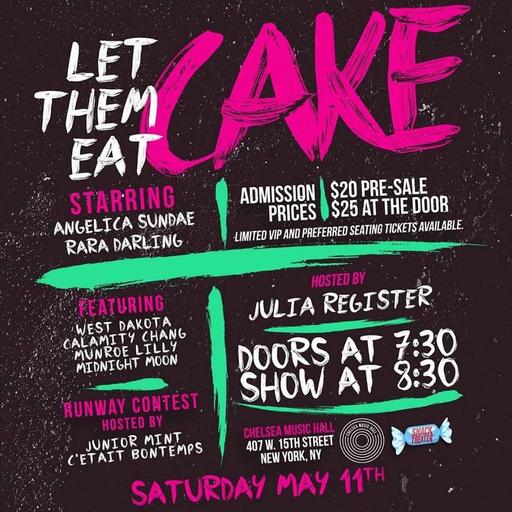 I am entirely about that! And I am so happy to have you with Thotyssey’s show Garbage Pail Kidz at Stonewall, hosted by the amazing Avant Garbage! Chartruice and Lacy Stoner will be in the building as well!

I have been looking forward to this ever since you asked me! I love Chartruice and Lacy, it’s gonna be a fun night with them!

Will this be your Stonewall debut?

It will be, and I can definitely say that the performance I have planned would make Ms. Marsha P. Johnson proud! 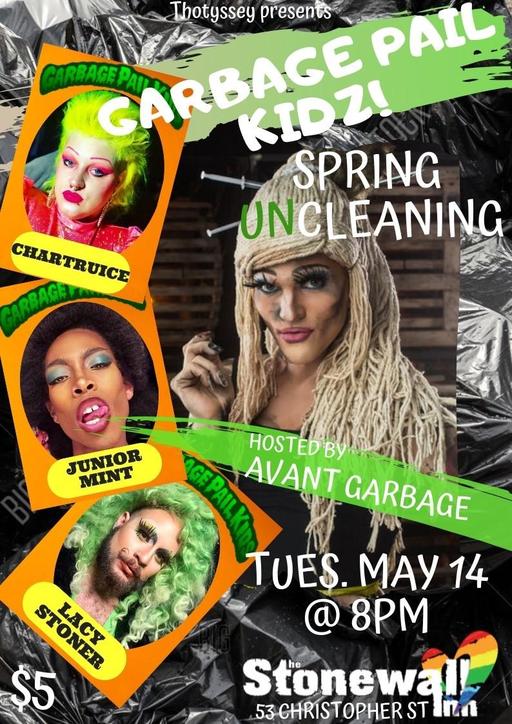 Down the road, you will be at Gold Sounds on May 26th for a drag comedy showcase benefiting the Trevor Project! Lots of great queens there with you. That should be amazing!

Oh yes! Not only is it a cause that I support and love, but it’s with a bunch of amazing artists as well. I’ve been planning a very special number for it! 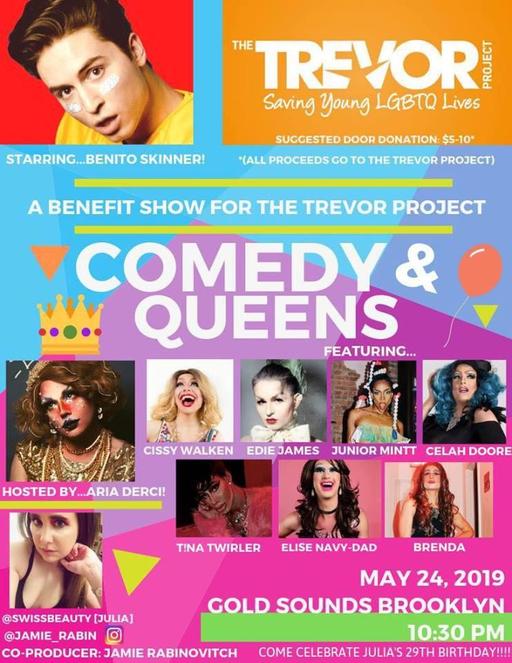 I’ll also be performing on May 9th at Wallbreaker at Macri Park! All the proceeds will be going to Drag Queen Story Hour!

Amazing! Okay, final, stupid question, inspired by your name and all the hoopla surrounding Avengers: Endgame... what is your movie snack food of choice?

I love that question! I love to eat, so I have a favorite collection of snacks! Junior mints, salty popcorn, and a hot dog; it’s the perfect salt, sweet, savory combo!