Here’s an OG Brooklyn queen whose vibrant personality is as large and lovely as her Perfidia wigs, and who infuses warmth, humor, culture, glamour and truth into all her stage moments. From El Paso to Bushwick and beyond, the mother of the drag House of JEM (named after her mentor, the late Cuban American academic José Esteban Muñoz) has influenced and inspired many, and continues to keep the fiesta fierce. Thotyssey gorges on the feast that is Lady Quesa’Dilla!

Thotyssey: Hello Lady Quesa’Dilla — and I’m rhyming that with “vanilla” for intentional comic affect as you do! Thanks so much for talking to us today.

I see that you and some of your Brooklyn girls were performing for a Frida Kahlo event at the Brooklyn Museum over the weekend. What was that exactly, and how did it go?

They asked us to get together a line up of fierce Brooklyn Latinx queens for their first Saturdays, honoring la mas chingona Frida Kahlo. It was a true honor, to be a able to host and emcee such a fabulous and important event. I’m extremely proud of all of us: Horrorchata, Jenn D’Role, Harajuku, Warhola Pop, Victoria Holiday and myself.

That must’ve been an amazing show. Has Frida’s art influenced your aesthetic at all?

Her aesthetic, and her unabashed queerness. She just didn’t give a fuck! Or at least, that’s how I imagine her — rolling around the grass with Chavela Vargas.

These days there are a lot more Latinx drag performers in BK then when you and Horrorchata started… that must be a great thing to have seen develop over the years.

It’s strange to think that I’m OG! It was me, Chata and Momo… kikikiki.

In general, today’s Brooklyn drag and nightlife have become a lot more driven by POC culture, music, looks, etc. It’s really interesting to see the scene change and to see who the shining stars are now. What newer queens are you singing the praises of?

All the girls at Xstasy in Sunset Park, who I don’t know…  but know they put on shows!  And I gotta sing praises for my JEM girls Constance Busti-ae and Bambi Clot. I worked with them as a youth advocate… so to see them born and raised NYC come through, I gotta pay my respects. And Onyma my drag daughter, who is a finalist for the Mr(s) BK pageant! I’m so proud of her.

Oh, I didn’t know she was yours! Congratulations, Mama! And speaking of working with youth, nowadays you’re employed at The Center.

My most current role is a career advancement coach at the door. Getting young people ready for jobs.

Retail. A lot of the young people I work with have never had a job.

And now you’re employing drag queens too! I love that you have all of these amazing daughters now.

Yes, honey. We have so much history, so to see them all grow into young adults has been such a gift. It’s a constant reminder of the role that we play in each other’s lives, purposefully and not. I always told them, “it’s not because I’m perfect. Just learn from my example.” But they still out there fucking up, lol!

Lol! Well you’re practically perfect… it’s a lot to live up to! So, you are from El Paso… were you always into the fabulous, the femme and the fashionable growing up there?

I was always funny, and a performer. And a storyteller. That’s how I demanded attention. Growing up, one of my Tias and her best friends were the best storytellers, and they would make everyone laugh. I learned so much from them, and I didn’t even know it was a master class. For me, the “being fabulous” came later. And the femmeness for me was always attached to my loudness, which is kinda weird.

By the way, it must really enrage you to hear Trump go on about how the Bordertowns struggle with illegal immigration, when clearly that is not an issue that’s seriously concerned them. And they certainly do not want this God forsaken wall.

It’s truly upsetting to see El Paso be used in the narrative, as this is what saved the republic. And it’s so far from the truth.

So what brought you ultimately to New York?

School. My sophomore year of college, I transferred to Eugene Lang College at the New School. I have a BA in Theatre, and then got my MA at NYU with Jose Esteban Munoz.

A truly fascinating and brilliant human! So, your plan was to be a stage actor?

John is a storyteller!

Was Miss Chi Chi Rodriguez an early drag inspiration for you?

I have to admit that I didn’t make that connection until much later. I’m a little slow!

She just crept into your psyche.

What was your drag introduction?

And when was Lady Quesa’Dilla born?

She came about after my solo performance The Brown Queen (the story of me growing up, being queer, and ultimately doing drag), Drag Race, and wanting to perform in Brooklyn.

Perfidia became your drag mom, and you’ve been high-haired ever since! How did you and this legendary queen first cross paths?

I was introduced to her by Sequinette, and honestly she took a liking to me. When we made the La Lupe connection, it was ovah. And I’m just so grateful, she’s become such an important part of my life.

I recall from some of your early bar performances, you always bought lots of food for the audience. That must’ve been a lot of work, preparing that.

It was! I used to prep and chop all the veggies for guacamole.

It was good, though! Nowadays, would you prefer to do more shows maybe outside of the bar scene… cabarets and theaters, where you could do more talking / joking / storytelling and less numbers?

For me, the two go hand in hand, But Untitled has been pushing me for my next solo performance, which I like to say I’m writing / living.

These days, you’re a regular performer for Horrorchata’s popular Yas Mama monthly party (first Saturdays) at C’Mon Everybody. What makes that night so special?

For me, it’s the DJ’s! Shomi, Chata, Ickarus, Hannah and our other guests really give you backyard quinceañera. You may be drenched in sweat and ready to sit, but then “Juana la Cubana” comes out. 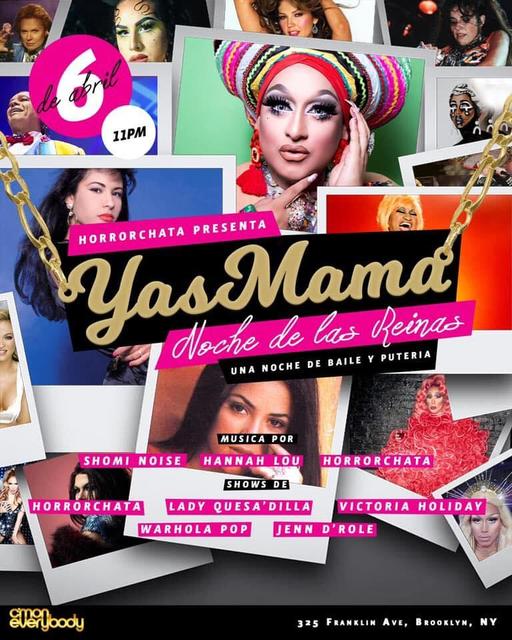 This Saturday, Yas Mama and Chata’s other big monthly, Be Cute, are merging for the annual Selena party at Littlefield! This should be epic.

It’s my favorite event because it’s a family affair. And the fact that I get to lip sync to a live Selena punk cover band!

OMG that’s amazing. Selena must have played a big part of your life as a native Texan and Mexican American. What is it about her that has had such an impact? Is it her music, her story, her identity, her personality?

Everything. I was 6 years-old when she died, and I remember watching it all in the evening news. I recognized that she was someone who looked like me and sounded like me. 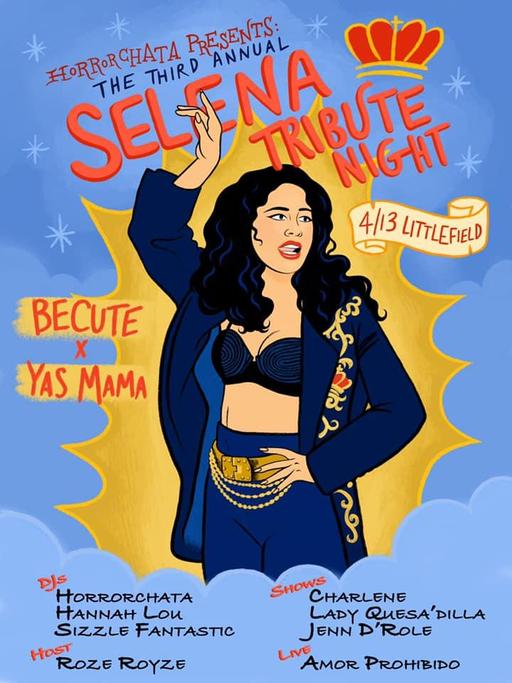 And May 3rd, you’ll be emceeing the annual Razor 5000 megakiki, which is at 3 Dollar Bill this year.

Its a fundraiser for the Queer Detainment Empowerment Project, which is extremely important. 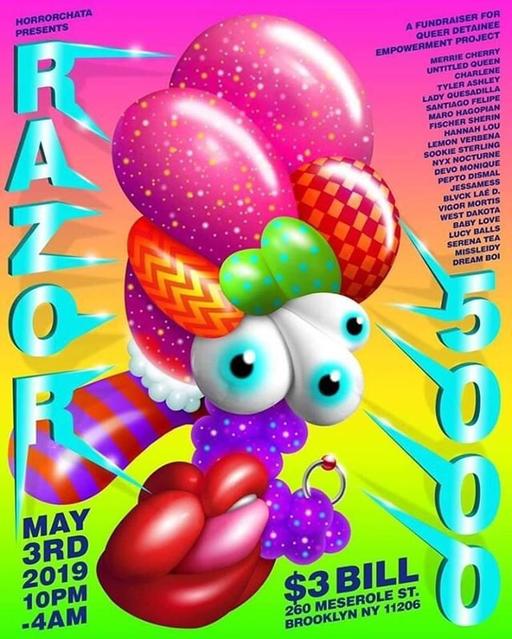 Bushwig is also rapidly approaching already. In 2017, you came out as HIV positive on the Bushwig stage in front of tons of supportive audience members at the Knockdown Center. What made you want to do that?

I knew I was going to come out, but didn’t really have a speech fully realized. It was so empowering. I did it because I knew that there are people with the same narrative as me — being poz in the age of prep / pep. And it’s so empowering to have others come up to me and say, “that’s my narrative.”

Always the teacher and truth teller… we are all so lucky to have you! Okay, final question, which shall be light and dumb: what meal would you eat every day for the rest of your life if it magically became fat free?

Couldn’t have picked better myself… thanks, Lady Q!