This Wonder from Down Under is currently blowing up Brooklyn with high energy, hilarious numbers, and she’s about to make her Manhattan debut for a Thotyssey production in the city’s most legendary venue. Lemon Chiffon chats with Thotyssey about growing up fabulous in small town Australia, fashion, beards, broken toes, and having nightlife’s most beautiful butthole.

Thotyssey: Lemon, hello! How are you?

I know you gigged at The Rosemont in Brooklyn last night with an injured foot.

Yes, I performed with a broken toe! I pulled a “no-heels” performance in a sexy moon boot, that I’m calling my Prada!

Werk! How did you break your toe?

I wish I had a glamorous story, that it happened Showgurls style. But I just smashed it against my bathroom door frame! I guess I was angry at something.

We all have our diva bathroom episodes.

It’s not my first, or last!

So, how long have you been a New Yorker?

Been here three and a half years now.

And you are originally an Aussie.

That is correct — from Melbourne, Australia.

Well, I technically grew up an hour out of Melbourne near the beach in a place called Ocean Grove, which if you can believe is named after Ocean Grove near Asbury Park in New Jersey. Looking back on it, growing up there I had mixed feelings like any small town gay. The town is self is beautiful, and I grew up on a farm raising horses. So that side was great. But it’s still pretty closed-minded.

Is that what brought you to our fair shores?

Yes and no. I moved here for my day job, mostly — I am a fashion stylist. I have two good friends here already, and to be honest I was getting FOMO. And I knew I needed to either stick to styling in Australia and try and make it, or go to New York and try and make it. [I chose New York] because I knew there be more growth.

What are your go-to fashions when you’re styling by others?

It all really depends on the person. I do love high end, so if there is money, love me some Acne, APC, Ami (all the a’s). But I also love to find vintage pieces, or working with a budget and finding great pieces at, like, Zara and Topshop/man.

How did you discover drag, and ultimately become a queen yourself?

The first time I really saw it would have been Courtney Act on Australian Idol. And I remember me and my family actually watched Season 1 of Drag Race on Australian cable. And I had seen [drag] in Melbourne at the bar Sircit; I think the first queen I saw there was Art Simone. And then my friend reintroduced me to Drag Race during Season 6. We decided to do a drag birthday party, which is where the monster was born.

But Lemon Chiffon didn’t really come to full force until NYC. I first started turning looks at Straight Acting. It started with my in a shake-and-go, some vintage dress… and then each month I bought more stuff, and slowly over a year it became more and more of an obsession.

I first saw you perform a few months ago, in Blvck Laé D’s “Let’s Have a Competition” at the Dromedary Bar.

Yes! And thank you for being a judge!

It was a great number! You didn’t win, that but it was a very crowd-pleasing performance… and you had a huge following in the room cheering for you!

I have some loud-ass friends.

Who were all those people?

They were friends and people from work. I have found a good network of people in NYC, and they all came out to support! I am so grateful for their support, and loud-ass cheering!

You danced in a jock and a tutu of sorts. This is very forward of me, but it was observed by many that night,,, you have one of the greatest looking buttholes in the biz… congratulations!

Why, thank you! What can I say, I know my ass-cets and used them! What ever gets me  booked and tipped.

And as to the other end of things, do you think you will always be a bearded queen?

For now, 100%. I look like a 13 year-old out of drag with no facial hair. I like how it really plays with gender. And no matter what anyone says, I feel fishy AF… even with the beard.

Have you had a favorite performing moment so far as Lemon?

I think one of my favorites was my birthday show last year at Bitch Nasty at The Rosemont. My parents where in town, and I got to perform for them… which was pretty special!

Are they big fans of Lemon?

They sure are! My mum always wants updates on all my looks, and to see videos!

Hopefully someone will be taping you on Monday, April 1 (7pm) at Stonewall, where you will be performing an April Fools Day-themed show we’re calling “Garbage Pail Kidz!” Thotyssey is presenting that, and one of our favs will be hosting: Avant Garbage! Also in the cast: She’Knead ThisGig and Megami, and you’ll all be turning ridiculous numbers! How amazing will this be?

I’m super excited for Monday! Can’t wait to see the shit the other gurls pull! They all serve great looks and numbers! And to have my official first Manhattan performance!?
I’m so excited! 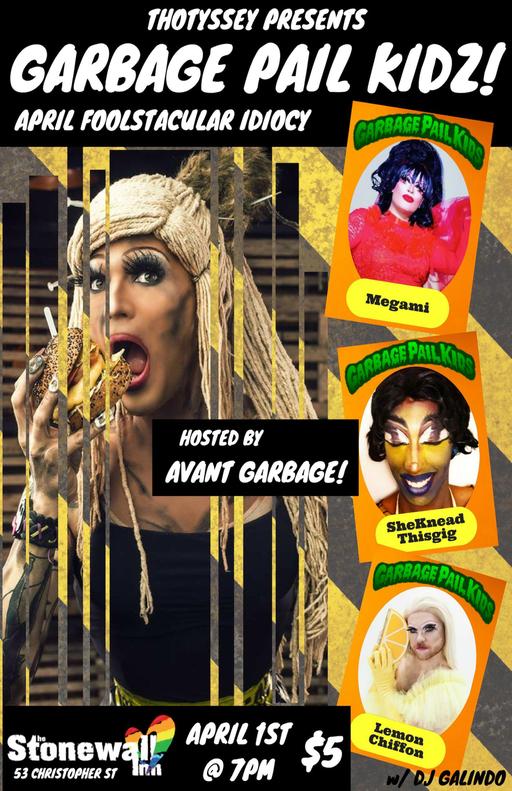 What else is in store for you?

I’m competing in the MR(S) BK competition on Friday, April 5th. So hoping to slay that!
And I’m working on more looks and numbers to have in my arsenal! Hoping to get more gigs, and maybe even throw my own party. 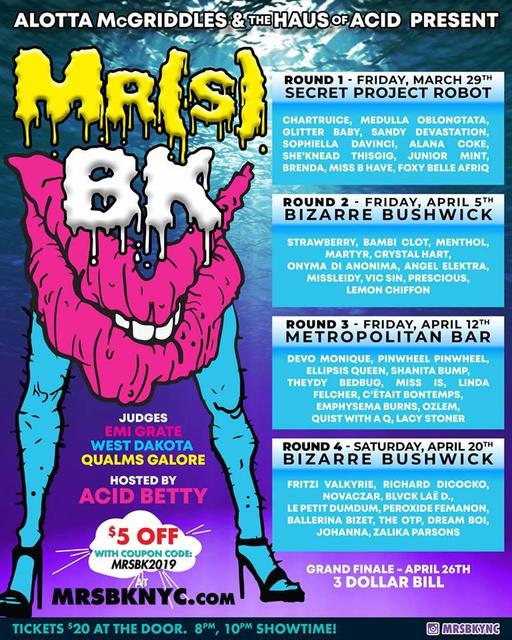 Lemon keeps it sweet! Okay, final question: what is your favorite song to perform right now?

Ooh, hard question… but it would be my Jessica Simpson “With You” mix I made!

A fine choice! Thanks Lemon, see you Monday!