Kiki’ing with Thotyssey about her legendary drag mom, “Baby Shark,” “The Music Man,” the current state of Broadway, her cooking show and her recent Ultimate Drag Pageant win… it’s the one and only Kiki Ball-Change!

Thotyssey: Kiki, Hellurrrrr! Thanks for chatting with us today!

So, how was your week?

I had the plague! I wasn’t feeling well for a few days… I finally went to the doctor, and found out I had influenza A and B at the same time.

Oh my Lord, that is extra! Have you recovered?

I’m on the upswing. But it’s especially hard, I’ve found, getting sick in NYC. I rarely get sick, and I always try to keep going, going, going. So, not being able to do anything and not go anywhere for days on end was absolutely killing me. I’m so happy to finally be feeling better.

Missing work (and the general FOMO) because of sickness is one of many challenges of NYC life. How long have you been living here, and where are you from originally?

I lived here very briefly in the summer of 2016, but I left and came back in August of 2018… so I’ve been here now almost eight months. I’m originally from the Florida panhandle.

Have you done the “Florida man plus your birthday” Google search challenge yet?

Yes! mine was “Florida Man Gets Stuck to Prepped Drag Strip Surface at the GT-R World Cup.”

That’s a good one! Are you offended by how the rest of the country sometimes views Florida, or is it at least a little accurate?

There are some wonderful parts of Florida, mostly the beautiful, diverse, well-educated cities. However, growing up in the most Republican county in the state, I can assure you that most of Florida is very, very, very stupid. I went to school in Orlando, which was a huge change of pace and lifestyle.

Were you always a performer of some sort?

Yes, I grew up in musical theatre. I’ve been performing since I was 7, so it’s very much ingrained in me.

What role did you have at 7?

I was an orphan in Oliver!

Aw! What are your favorite shows?

My favorites are mostly oldies but goodies: Fiddler on the Roof, Guys and Dolls, Hair, Into the Woods…

Are you excited about this brand new production of The Music Man with Hugh Jackman and Sutton Foster?

Yikes! I should be, but I’m not a huge fan of Hugh. And I love Sutton, but I was a little sad to see two white people in the lead roles. Give me Audra as Marian!

Oh, that would’ve been great! Yeah, definitely these revivals should be taking advantage of POC casting… especially since it seems Broadway is otherwise not really giving us too many new concepts or stories these days.

Exactly. Oklahoma! is a great example of a good way to bring a revival. Completely new way of telling it, completely diverse casting, and a quick run to make room for more work after it!

Broadway is saturated with shit we’ve already seen or we already know. Jukebox or bio musicals: The Cher Show, Beautiful, Ain’t Too Proud, Jagged Little Pill… Movie musicals: Waitress, The Band’s Visit, Mean Girls, Beetlejuice, Tootsie, Moulin Rouge, Aladdin. Anastasia, Frozen, Kinky Boots, The Lion King, Pretty Woman… So, I want more new works on Broadway, and I want revivals to be told from a 2019 lease! Is that so much to ask!?

Amen! So, okay back to you… when did you discover drag?

I always knew of drag, but growing up where I did, I wasn’t ever saturated with much gay culture. I wasn’t completely out of the loop, but it definitely wasn’t ever something I saw myself doing. It wasn’t until I really got into watching Drag Race that I finally decided to give it a try.

I was staying with my parents for a few months, who had since moved to Montgomery, AL. I was bored out of my mind, and was stifled creatively because I wasn’t performing at the time. I was so behind on Drag Race, so I started binging all of the seasons… and slowly realized it might be something I’d like to try. I found the one gay club in Montgomery, and a few weeks later Kiki made her debut for a handful of people.

How did you come up with your name?

So, surprisingly, I’d had the idea for my name for years before I finally did drag. I love punny, irreverent drag names, and one day in either high school or college, I was sitting around thinking what my name would be if I was ever a queen. I knew it would have to be a play on words, and I knew it would have to be based in my theatre background. I think I was just throwing out typical theatre dance moves, and “kick ball change” was one that came out. I thought Kiki Ball-Change was hilarious, and it stuck around until I finally birthed her. I almost changed it though!

Glad you kept it!

Me too, it’s so much more me than “Pussy Popadopoulos.”

Indeed! Do have a drag mother?

My drag mother is Coco Peru.

Through social media, actually! I’d been a fan of hers for years. I design websites for actors frequently, and her website was a little outdated — so I offered to design her a new site, and our friendship developed from there. I adore her.

She’s gonna be in the Trick sequel!

How did you get started as an NYC queen?

When I briefly lived here in 2016, I’d met Marti Gould Cummings at the coffee shop I worked at. I sang as a boy a couple of times at a show she used to have in Hamilton Heights. We stayed friends on social media after I left. Then when I moved back in August, I met Poppy, who gave me my first guest spot in her old show “Poppy’s Playhouse” at the West End. Poppy told me a little about Ultimate Drag Pageant, which she’d competed in and won, and told me I should consider doing it. So, I reconnected with [pageant host] Marti, and signed up.

How did you enjoy your UDP experience? I mean you won, so it couldn’t have been all that bad!

It was an incredible experience. I learned so much about myself and my drag because of it, I made some wonderful new sisters, there was just enough drama to keep it entertaining… and yes, I won, which was absolutely wonderful.

As a result of winning, you now host a Thursday show at the West End, “Kiki With Kiki,” which just premiered last week! How did it go, and how would you describe the show to the uninitiated?

It went well! It’s my first solo show, and it’s a four week run, so I’m trying to use this time to find out what works and what doesn’t. To those who haven’t seen me perform yet, I like to describe my drag the way someone told me after one week of UDP: “simple and stupid.” I love to laugh. It’s the best medicine, so any way I can find to make people laugh as much as possible, I’m going to do it, and hopefully also look and feel gorgeous on top of that. 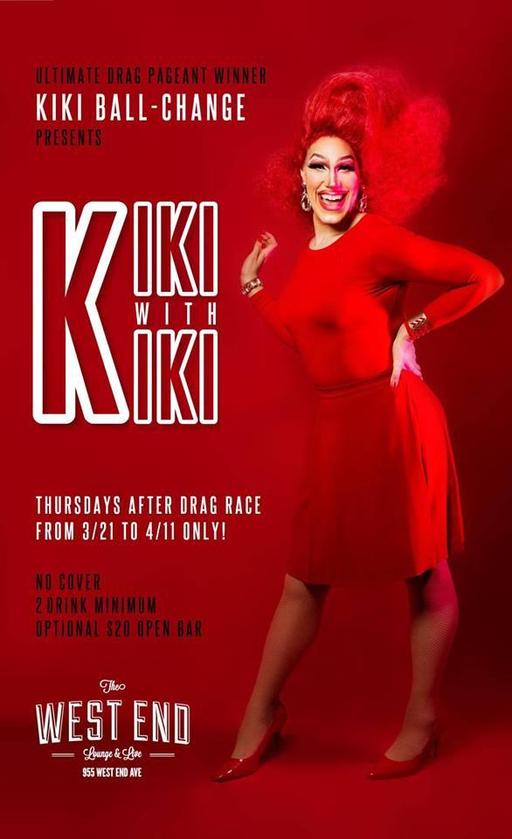 You’re starting a new karaoke in April, too.

Yes! The first one will be April 18th! It’s at this beautiful Korean BBQ restaurant in BK, Insa. You can come, get drunk, belt your face off, and maybe see me sing a number or two myself! 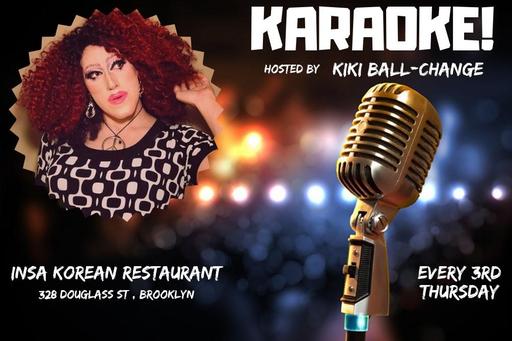 And you have your own drag cooking show on YouTube. Kiki’s Kitchen! What’s your favorite thing to cook?

Well, the very real part about Kiki’s Kitchen is that I’m actually very much never in the kitchen. I’m such an eating-out fiend. I have a massive sweet tooth, so baked goods are usually my go to in the kitchen.

It’s funny and relatable, watching you try to make these exquisite creations in this tiny, cramped New York apartment kitchen.

Moving out of my parents’ house was the worst thing to happen to Kiki’s Kitchen. I think I’m going to upgrade and film in my friends’ kitchen next episode, so keep an eye out for that.

I understand you’re appearing in a video with Marti doing “Baby Shark,” which is coming after the viralization of that cute clip of her performing for a happy kid at brunch.

It was a dream come true. Marti is one of the hardest working and kindest queens out there, and it shows. I’m so glad she’s getting all of this positive attention.

I can’t wait to see this! Okay, last question: if you could play any Broadway role you wanted, who would you be?

Three answers: If I was out of drag, my dream role is either Elder Cunningham in Book of Mormon or Woof in Hair. If I was in drag, Frank N. Furter or Hedwig. Wild card: Miss Hannigan in Annie.