A longtime favorite of the circuit scene, this globe-trotting DJ and event producer returns to NYC for a few more editions of the epic manfest BRUT, as well as a party of his own in Chelsea. Get into the phat beats and thick fur of our darling Dan Darlington!

Thotyssey: Dan, hello!  You were just in San Francisco for a BRUT night… how did that go? And what’s your overall opinion on how SF partygoers might be different from, say, the New York kids?

Dan Darlington: Our gigs in San Fran are always so much fun. Our parties are usually really similar in each city. Everyone comes in with very little attitude, but high anticipation and great welcoming smiles. I think the difference between San Francisco and New York is the time constraints. In NYC, we go later and people expect to–and do– stay later. So things start a lot earlier in San Fran then in NYC.

How much of your time annually is spent traveling as a DJ, generally?

I fly at least two weekends a month. I have a regular job that I have to work on Wednesdays, and I always have to fly back. So my trip is usually Thursday to Tuesday.

And do you have a favorite city to spin in?

I think any DJ or performer will tell you their favorite city to perform in is their home city, so NYC is my favorite.

Are you a native New Yorker?

What kinds music were you into, growing up?

I guess popular music. My favorite was the band Heart. It was my first cassette tape I bought for myself. Middle school, it was hip hop and pop. In high school I listened to alternative rock and heavy metal. In college, it was folk. House music didn’t enter into my life until I graduated college.

And how did you get into DJing?

I guess it came from the complete joy music gives me and my desire to share that joy. I always made mix tapes and CDs for my friends for as long as I can remember. Then once I got into listening to house music, I bought a computer program that allowed you to DJ. I thought that couldn’t be all there was to it, so when I moved to NYC I took a class at Scratch Academy to learn to spin and scratch on vinyl and CDs.

Do you still work with vinyl?

Well, learning on vinyl and learning to scratch is more for hip hop. So I never really practiced hard on that. But once you learn how to spin vinyl, you just need to practice to perfect it… you don’t forget.

You and Cherie Lily had a popular kiki at Santos Party House back in the day… the Mission Party!

Yes! Cherie and I started the party, Peter Napoli and I DJ’ed it.. usually with a special guest DJ. Acid Betty and Jimmie Sprinkles came on for one party, but Peter has been with me since the beginning. Cherie was my partner on Mission, but it was more of a silent partner, in that she didn’t want too much responsibility because she was working on her own brand. She is, by the way, the most beautiful, wonderful woman on the planet.

What was the best thing about that party?

When we first started [Mission], we had a hip hop girl dance troupe that we used as “hype girls” to pump up the party. They were incredible, and I would always need to slow the tempo down for them so they could get all their moves in. They always made up a routine that got the crowd involved, and then the crowd would also be dancing the routine along them. It was awesome to watch.

My favorite DJ moments were always at Santos. When I spin, I would rather be in the party on the floor verses in a booth or on stage. At Santos, we opened the stage so people could dance around me. I miss those days.

Lots of DJs preer to keep some distance from the crowd…. especially when it comes to people making song requests!

Yes, song requests get annoying depending on the party. But I just want to feel the energy of the crowd all around me. We always had a perimeter established around me so the only thing we worried about was people damaging the equipment. But luckily that never happened… except one person did knock the table one time, and my computer feel completely off the table and the music ended. It was aggravating and funny at the same time! It was like, in slow motion, to watch my expensive computer fall and bounce off the table.

You and Peter Napoli are currently the house DJs for the traveling BRUT party. When did that start?

Brut started in 2013; it was my going away party when I moved back to Chicago. I was there for a year and a half. I had to move back to NYC because BRUT was doing so well.
Peter has been with me since the beginning.

How would you describe BRUT, and how it’s evolved over the years?

Our party is a perfect merger of seductive house music and the power of confident sexual energy. We are the party that people can safely discover their wild side without fear of judgement. Our party always tries to subject people to new music that they aren’t used to.

When we began at Santos Party House, we had two stages two floors to deliver that objective. But times are hard for selection of venues, and we are lucky to even have a party at all. So we had to evolve, and go bigger in order to afford larger event spaces.
And the kids keep coming back, no matter where the party turns up!

BRUT is actually showing up at 3 Dollar Bill in Brooklyn on March 30th. That’s a perfect venue for both the night’s original sexy ambiance, and a large enough space for a circuit party.

Yes! We are ecstatic about it. It has the best of both worlds, really: the beauty of the front bar, to the industrial warehouse feel in the back. Finally, a queer space that can live up to expectations, and deliver a big party! 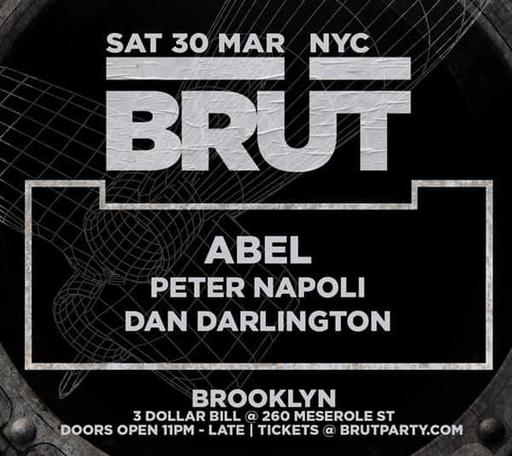 And on June 29th, BRUT is taking over the PlayStation Theater for a colossal World Pride weekend!

I am excited… I really can’t wait. We are actually throwing two parties: Dies3l at Webster Hall on Friday and BRUT at PlayStation Theater on Saturday. And we also partnered with Hustlaball at 3 Dollar Bill on Thursday. With the amount of people coming to the city, the promoters here really needed to answer the call and give them all something to do.

That weekend is gonna be so… insane.

We were lucky enough to score two of the most iconic theaters in Manhattan. But what I am telling everyone is that you don’t have to worry whether or not the party is going to be packed… they all will be. Go where you know your friends will be, or that DJ you follow. Anywhere you go, if it is on the Heritage of Pride website, you are guaranteed an amazing time. 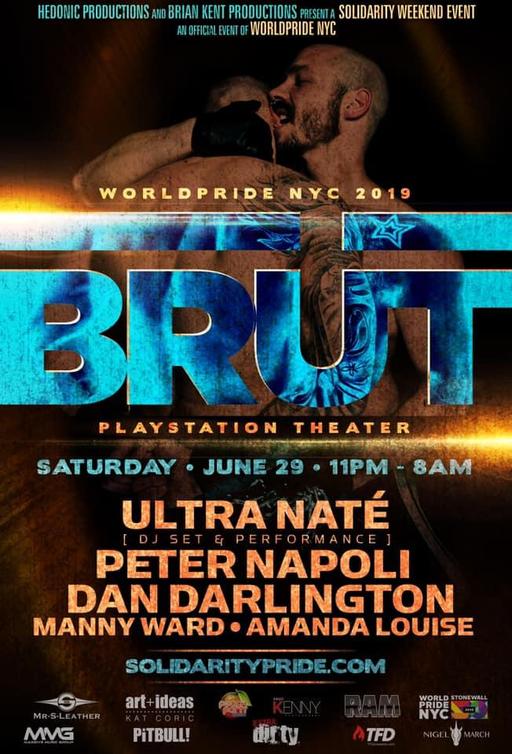 But before all of that, this Saturday at ReBar is a party you’ve DJed a few times… Remember The Tea.

Yes! Remember the Tea is all about nostalgia. It was those fun Sunday Tea dances that you went out with your friends… no agenda, you just went to be with them and laugh and drink. So, it is a tea dance on a Saturday night! Rebar is perfect for that. 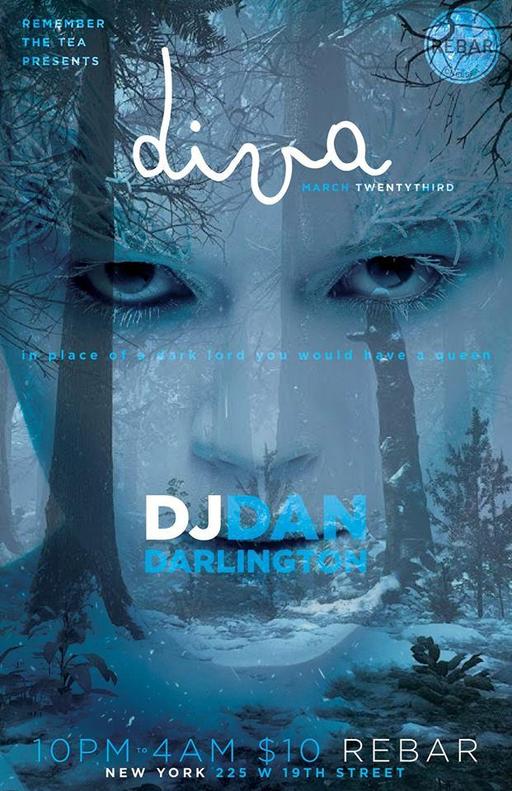 Right now we have the first BRUT in Washington DC coming up in May, along with a party in LA, and IML in Chicago. Then we have World Pride. Plus, BRUT last year for the first time made an appearance in Madrid, and we will be return there for their Pride to spin Dies3lfest. We will also be headed to Ptown, San Francisco again, Dallas, Cherry Grove, The Pavilion. So we will be around. Plus, hopefully you will be seeing more of us at 3 Dollar Bill! 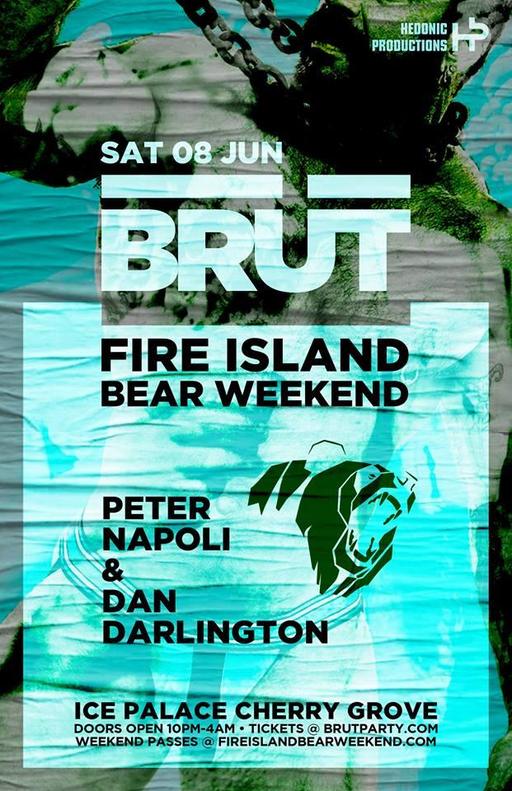 Oh man, the biggest? There is so much that is different! I guess the biggest difference is the necessity of it is gone. Going out wasn’t a choice when I was young… you did it because it was fun, sure… but you also needed it to socialize and hook up. That necessity is gone. So the people who are still going out are doing so because they do crave the fun of it, and the music, and the energy. I could go on and on about the differences. But I will leave it with… they are different, but neither is better than the other. I have just as much fun now as I did at 21.