This young Panama-born queen is already making impressions on the scene with winning looks and performances, a web series on the way and a famous drag mom in the wings. Get ready as drag alchemist Xunami Muse makes waves!

Thotyssey: Ms. Muse, hello and thanks for chatting with us! How was your weekend?

Xunami Muse: Wonderful, thanks for asking!

Glad to hear it! So are you gonna vote for nominees in the Brooklyn Nightlife Awards, or are you still kinda unfamiliar with who everyone is in that scene, being a young queen and all?

I actually didn’t even know I could vote until now! Lol. My vote will be going towards my favorite kings and queens whom I’ve met through this journey so far.

Do you consider yourself to be a Brooklyn queen, or are you an Interborough kinda gal?

The first time I performed was at Pieces, and from there I got the chance to perform at different bars in the city… so Manhattan will always have my heart. But then my first time in Brooklyn, I got a warm welcome and every time I come out here I feel the love too. I’m gonna go with “interborough” because 1) I had to google the meaning, and 2) I’ll go wherever there’s a check.

Let’s bounce to your origin story… where are you from, and how did you discover drag?

I was born and raised in Panama, and I moved to NYC when I was 13 and have been here since. The first drag show I saw was when I was 18, when my friends took me to a party at Escuelita. At midnight they had a drag show; I remember being so mesmerized by the illusion. It was Princess Janae Banks (may she rest in peace), and I remember just being so obsessed ever since.

That’s a great first impression of drag! When did you start performing yourself, and what was that first experience of being in drag like for you?

As Xunami, I started performing in March of last year. My very first time in drag, it felt like this inner being had stepped out. I like to think of it like alchemy, based on how you arrange certain elements (hair, make up, wardrobe) you get a different result every time, and a different side of “you” emerges, and you get to channel and have fun. Drag makes me feel alive.

What are your performances like, for those who’ve never seen?

I’m all about the lip sync. I like making people feel like the words from the speakers are coming out of my mouth. I also salivate when putting a look together. I like being able to switch vibes with the wardrobe, like from model from the runway, to early 2000’s hip hop princess, to Blatina barbie, to a fashion interpretation of a court jester.

Kandy Muse is your drag mom… how did that come about?

We met at Pieces. The first time I met her was when I first I won Drag Wars; Kandy came up to me and showed me mad love that night. Then I ended up winning the following three weeks and was just like, “you know what, I need to give you my last name.”

These days, you two are co-hosting the Season 11 RuPaul’s Drag Race viewing party at the Standard Hotel’s new No Bar on Thursdays! How’s that going?

It’s going great. It’s so fun and light. It’s Kandy, DJ Hannah Lou and myself every week, with weekly special guests and a Ru girl here and there. We all watch the show together with the audience as if we’re in our own living room. Questions and trivia go in during commercials, and after the episode we do our favorite part, which is perform. And then even the audience gets to participate and win a t-shirt in our lip sync battles. We’re big on audience participation and making sure everyone has fun, and feels safe and comfortable. I get to make fun of Kandy on the mic, so that’s a win for me.

Plastique Tiara, a cast member of the current season, was your first guest queen… what’s she like?

The sweeeeteesssttt angel. She’s, like, what your favorite dessert tastes like… but visually. She looks nice, she smells nice, she IS nice. Dope sense of humor. I’m a fan. Everything is so on point with her. I got my life.

Nice! So it seems that this Drag Race season is gonna be… something? Fifteen queens is a LOT. Silky Ganache is getting shit from the other queens for Carrying and generally hogging screen time, but I kinda don’t blame her with that many queens in the work room, right?

The way I see it, she’s the bitch in everybody’s mouth so far… so she must’ve been doing something right! It’s gonna be a long season, so I’m excited to see who has the creative stamina to jump through the hoops and snatch the crown.

What’s the plan for this week’s viewing party?

This week [we’re joined by] Janelle No. 5, and next week it’s Ongina from the original season of Drag Race. 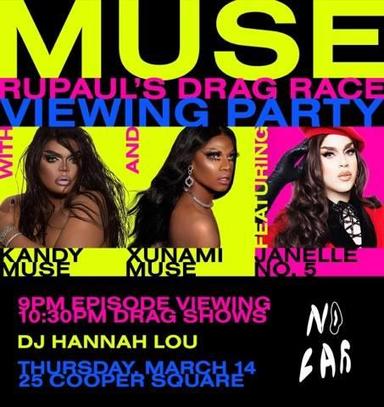 Now let’s talk about Real Drag Moms of New York, a comedy web series in development that you’re gonna be a part of along with Lemon, Pussy Willow, Vix, Audrey Phoenix and Michele Shocked! How did you get involved in this?

[The show’s producers] Sterling and Aaron reached out to me through IG. They mentioned noticing my pictures and videos and pitched the idea. I found it to be a fun and silly project, and was so happy to be asked, so I immediately said yes.

And what do you think the audience can expect from the show?

You can expect us to act dumb, silly, snotty, and real shady with each other for some good random and campy laughs.

Describe the Real Drag Moms version of you.

She’s the editor-in-chief of a magazine, and judges people based on what fabrics they wear. Stuck up and cutthroat, she’s all business and always finds time in her schedule to neglect her children. Very Whilemina Slater from Ugly Betty, but like with my own Naomi Campbell twist.

In the meantime, the cast of Real Drag Moms will be performing for a benefit of sorts at the West End on March 28th called “Moms Care.” What’s happening there?

Expect dumb shit. Expect laughs. It’ll be a fun show where we all get to perform and talk about what we’re cooking up. Also, we will be launching our” Seed & Spark” crowdfunding campaign. All of the money will go to the production of Drag Moms, and each donation comes with a specific gift. 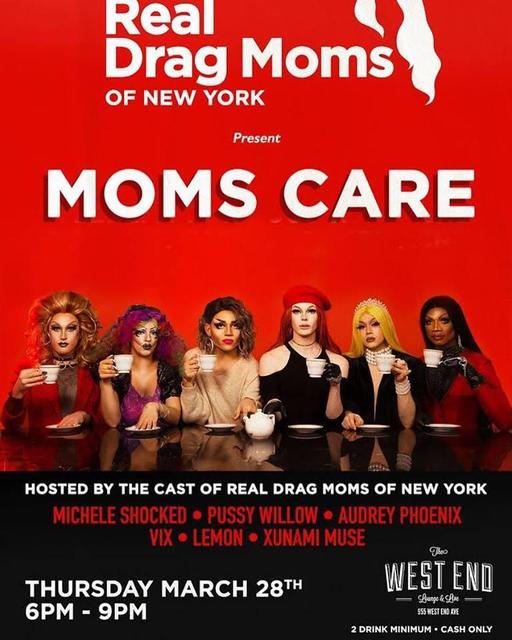 Wonderful! Anything else coming up that we should mention?

In May, catch me at “Shequida’s Drag Wars: All Stars.” I’m excited because what I’m putting together for that is something I’ve yet to tap into. So we’ll see how that turns out!

Amazing and good luck! Okay, last question: what’s your favorite thing about drag so far… and your least favorite?

My favorite part is tapping into that different persona I get to portray. It’s taught me so much about myself. Also, meeting all the unique drag queens in the city, getting to talk to each and every one of them, and learning about their own creative process has been my favorite thing so far. Least? I would say the amount of time and money that goes into drag. But hey, I’m learning to love all aspects of it, because without them, you wouldn’t have the overall picture.