This fun and fashionable new queen is making her way through a major drag competition, and is on the fast track to internet stardom. We can’t make any “rising from the ashes” puns yet cuz her star is just starting to burn bright, so let’s just meet the fierce Audrey Phoenix!

Thotyssey: Audrey, hello! So okay, I must start with a discussion of that Drag Race tie… was this a great thing, or do you call Shade?

Audrey Phoenix: A part of me wants to call shade, but the other part is just so thrilled and excited for Monét. I just wish she could hold the title alone. OK, maybe I am calling shade.

Yeah, Trinity did consistently great through the whole season, but I feel like Monet clearly won the episode and therefore should’ve won the crown… if we’re going by how Sasha won her season!

Ha! Fair point. I mean, they went out of their way to make sure they were the only two with perfect judges critiques.

Yes! Oh well, I guess two is better than none. And I’m sure we’ll get swept away by Season 11, and this will soon all seem like a blur! Are there any queens you are excited to see on the show next week?

I’m really excited for Shuga Cain. I’ve been a fan for a while, and she’s one of the nicest queens in New York. I think she deserves the world.

Meanwhile, you are taking part in a pretty major drag competition right here in NYC, Icon Bar’s second season of ICONIC! How’s it going so far?

Super fun. Super challenging. But I’m having the time of my life. Icon is such a great space with such a huge stage to play with. This competition is really the place to “go big” every week, and the venue really lends itself to that.

Last night was the animal challenge… what animal did you portray?

I was a fly. I had Pussy Willow chase me around the stage with a giant fly swatter. Average Sunday, you could say.

That sounds amazing! Are all you competitors getting along well enough, or are the girls out for blood already?

I love all these girls, and I sure hope they like me! These things can get competitive, but at the end of the day I’m just here to have fun… and if I score some Kryolan swag, even better! 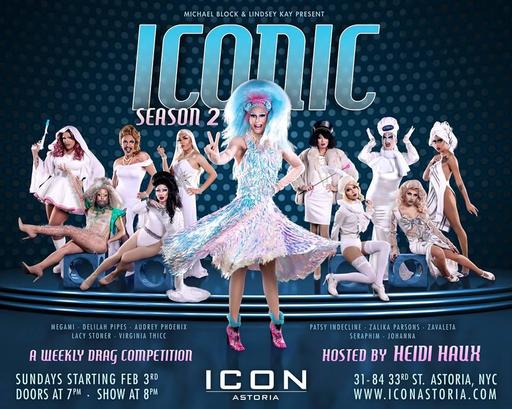 Let’s bounce back to the beginning… where are you from, and how did you begin as a creative person?

Born and raised here in New York! I grew up in the Bronx, actually. Art came into my life when I was 2-years-old, when I began drawing on my bedsheets with crayons. My mother decided to put me in art classes, and a couple decades and a BFA later I was a graphic designer! It’s still how I pay the bills.

Oh wow! And how was Audrey born?

I had always wanted to “try” drag — and I would fool around every Halloween — but it was never anything serious. Then one day, a friend of mine sent me a Facebook post by Sutton Lee Seymour asking for volunteers for her Debutante Show at Albatross. She gave us about two months to prepare, and I gave it everything I had. That was the first time I ever “performed” in any way on stage. I got bit by the nightlife bug, and it all sort of snowballed from there. Then I’d say the Ultimate Drag Pageant with [host] Marti Gould Cummings was when people started paying attention. I definitely owe everything to Sutton and Marti.

How would you describe your drag, aesthetically and performance-wise at this young stage of your career?

If someone tells me I’m pretty and someone else tells me I’m funny, then I’ve nailed it. I love making people laugh, and I love just being completely stupid. But I’m still learning a lot about myself, and I’m excited to see where the next year takes me both aesthetically and performance-wise.

And you sing! You do a mean Shaggy.

Haha! I’m not a singer, and I close my ears to anyone who says I can sing. I’ll leave that to the JanSports of the world. I think that number works because of how ridiculous it is. It’s probably the only song I know that sits right in my very, very limited range.

I see that on Tuesday you’ll be at Rockbar with Delilah Pipes, Godiva Romance and Cicatrix for a show called THIS! What will we get from “this?”

Oh, more stupidity from me, I hope! I think it’s gonna be a fun night. The four of us are all so different, and we’re going to be bringing that to THIS! Flips, kicks, tricks and maybe a live vocal or two. 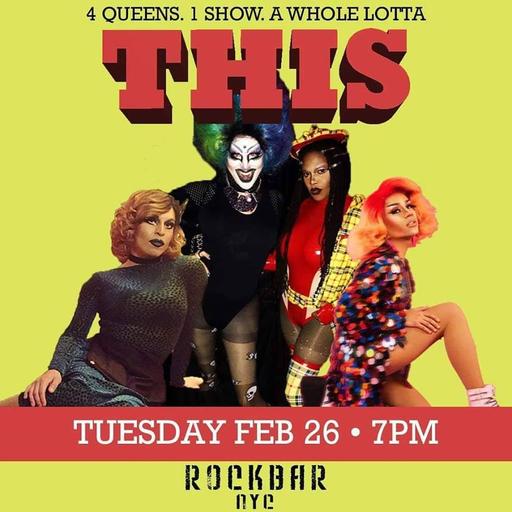 Amazing! And you’re also taking part in what’s bound to be a super fun new web series. Tell us about Real Drag Moms of New York! How’d you become involved, and what is your role in it?

I got involved through Sterling and Aaron Cooper. Sterling and I did UDP together, and she’s become one of my best sisters. They approached me with the idea, and I said yes immediately. It’s a Real Housewives parody, and I love this idea of these six drag queens being in that reality TV type situation. We’re all playing super heightened versions of ourselves. This Audrey is a bit of a trollop. A bit of a man-eater. But also a tech guru, because we’re all rich, ya know?

Totally! Do you get to throw wine in anyone’s face?

Ha! Do you know when folks might be able to watch this?

Soon, I hope. I’m sure there will be an announcement when all that is ready.

Very exciting! Okay, last question: What’s something that you’ve learned about the art or business of drag that has surprised you the most?

Don’t drink and drag! It’s dangerous, and can get you into all kinds of trouble.

Words to live by! Thank you, Audrey!