At the forefront of Long Island’s drag resurgence is this fun queen, who this weekend celebrates the first anniversary of her popular monthly drag show in an otherwise straight neighborhood bar. Thotyssey climbs high with Ivy Stalls!

Ivy Stalls: Hi Jim! Thanks for having me today very honored to be chatting with you!

The honor is all mine! So it’s been several days since the Grammys, but did you have a favorite moment from the show?

Gaga will always and forever be my favorite, no matter how crazy she is. I love that she enjoys being herself, and nothing stops her! As for the rest of it… I wasn’t really entertained.

Do you think Gaga will get the Oscar?

I have a strong feeling she will! She has come such a far way, and truly deserves it.

Yes! So, now on to Ivy. First off, are you a native Long Islander?

Yes born and raised on Long Island in Oceanside, but now reside in Lindenhurst.

Were you always a performer of some sort?

I have been doing theatre shows for several years now. I actually run a school program for kids ages 3-17 years-old for the last nine years here on Long Island. I also direct a lot of theatre shows, as well as perform.

What’s the last production your school group did?

We just finish the full production of Godspell with the kids. And us adults did Charlie Brown, where I went from drag to Linus!

When did you become Ivy?

I’ve been following a lot of well known drag queens for years, like Holly Dae, Brenda Dharling, Ariel Sinclair, Porshe, Logan Hardcore and Bootsie LeFaris, and always wanted to perform. So when I did a musical production of La Cage Aux Folles, I had the itch. I first did Holly Dae’s “Beat Your face” [drag competition] and won, so from there it snowballed into creating a name for Miss Stalls.

How did that name come about?

I picked “Ivy” cause I thought is was pretty, and my best friend came up with “Stalls” which is similar to my last name. Kinda cheesy! Or, “stalls” as in where you can find me doing what I do best! That’s my joke….find me in the stalls after the show for fun!

Let’s talk about Long Island drag… there wasn’t much of it a few years ago. But then queens like yourself, Annie Manildoo, LaBelle and Syn (among others) showed up and started creating new showcases for queens all over the Island; really, just last year this started happening. How did this all come about?

Yes, drag [in Long Island] died out for a little while except for Fire Island. But we as a team started to try and bring it back, doing little gigs here and there. And from then, it’s been an amazing experience and journey.

And it’s been inspiring to watch! Who exactly is the audience for drag in Long Island?

It’s been a mix of different people, but I honestly have to say I have not met one person who doesn’t think it’s amazing coming back and loving it! It’s a mix of all types of people, which makes it even better.

Since there are virtually no gay bars on LI outside of Fire Island, you all have had to be creative with where you have your shows. But some towns can be conservative… have you ever experienced pushback from the community in what you are doing?

I have to say no. They have all been loving it, and bar regulars are coming back to all the shows!

I see that legendary Fire Island queen Porsche did a few shows out in Sayville these past few months, and you were her guest one night… that’s must’ve been a fun show.

SUPER FUN! I absolutely adore her and love working with her. She is going to be my special guest for my one-year show on Saturday, as well as 12 other amazing and talented ladies.

Tell us about One Eye Jacks and how your monthly show there, Saturday Madness, has been going after a whole year.

Well, a year ago this month I was asked by Olivia London and Annie to bring a show to One Eyed Jacks. At first, the bar being a straight bar was a little nervous about having a drag night there. But after the first month and a huge success, it’s been an amazing journey and experience, and now one year later we’re still doing shows.

The way I run this show is I open it up to different gals each month, so others get the opportunity to perform. As we all know, in the drag world it’s very hard to get gigs… so I wanted to do a little something different and allow anybody that wants to come perform to be able to have the opportunity. I do have my core girls that are with me every month that includes Annie Manildoo, Syn, Bella Noche, LaBelle and Millennia Fox.

It should be an epic anniversary this Saturday! 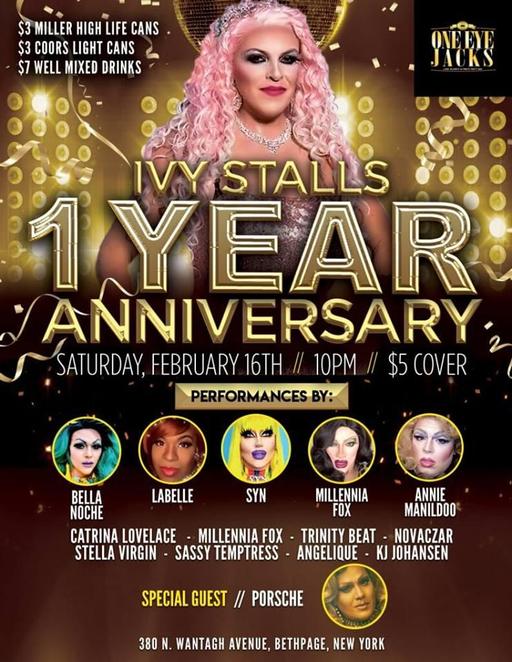 And I see you’re also doing Syn’s Drag Factor competition at Pride For Youth on February 28.

I’m super excited! I think it’s an amazing thing they do there at PFY; the whole center is a great idea, and the guy Nick that runs it does an amazing job! It’s nice to have a place where young kids can feel accepted. 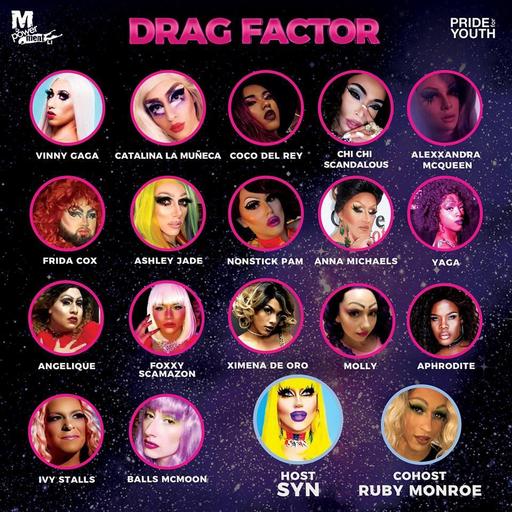 Have fun with everything! Anything else coming up for you?

This Friday I will be in Connecticut for a gig at Fast Eddies in New Milford. I’ll be with Annie and Bella! This is a gig the CT radio station KBJB Radio will be sponsoring. Super excited! 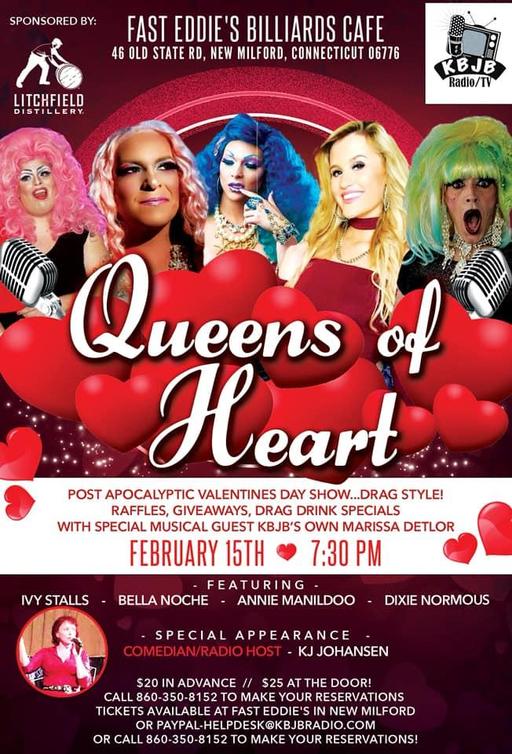 Okay, last question: being that today is “Galantines Day” (ugh, lol) and to honor the last Drag Race challenge, are you a Carrie. Samantha, Charlotte or Miranda?

“Ugh” is right, lol! And it wasn’t a very good challenge! Not too into that show, but I’d say probably more Samantha?

One thought on “On Point With: Ivy Stalls”