From the farthest reaches of space and time comes this interstellar DJ, producer and queer femme scenester. The multi-faceted Pauli Cakes tells Thotyssey about their weird and wild ride through NYC nightlife, their  love of knives, their hatred of Maroon 5, and what’s in store for all of us!

Thotyssey: Pauli, thanks so much for talking to us today!

Pauli Cakes: Hi babes! Thanks for having me!

Absolutely not at all!  I don’t care for sports, and I don’t watch or own a TV. The Super Bowl and Maroon 5 are gross and tired.

Sometimes it takes the numbing blandness of an overhyped slog like that to remind us all how colorful, exciting and weird queer subculture can be, right?

I thank the universe everyday for aligning me with my queer family and the beautiful, eclectic world that I’ve opened my eyes, heart and soul to. I feel like the Super Bowl is more or less a government funded operation to distract us from reality and suck us more into this capitalist homogenized hell hole. The Super Bowl doesn’t care about us.

True that! So where are you from originally, and what is your origin as a performing artist?

I’m originally from a little star that exploded in between Venus and Mars. I opened my eyes as an infant in a faraway Neverland called The Bronx, in NYC. No fairytale to be mistaken, I never went to art or theatre school. I struggled with my self-esteem and was bullied a lot as a child, but I had all of these characters and energies within me. I demanded my respect, and then treated the world, as my theatre. I guess that’s where my origins as a performer started.

I feel that performing by force of habit is a normality for inner city kids who are going through it; that’s why our stories make for best media!  I’ve always been very curious, troubled and dramatic, which led me into situations where I’d have to perform to get in or out. I gogo danced in my teens, and that gave me the confidence to dance naked in front of crowds.

When I was 17 or 18, I recorded music and performed at a venue called Powrplnt in Brooklyn — and I felt so uncomfortable, I loved it. Later that year, I was invited to a video shoot for a synthwave band. They had a gallon of fake blood and a butcher knife lying around, I picked it up and danced with it and went into a trance. I always had this fixation with knives, I was terrified of them, and then fell in love. The origins of my performing arts are deep rooted in the many layers of my identity dating back to other dimensions of time.

If you don’t mind me asking, how has your gender identity informed your art?

I don’t feel like I am one gender, I feel like I am many genders, and none at all. That reflects on my work being many different things, multi-faceted coming from one being. My gender identity has been a personal journey for me, like my artistic process. I’ve always felt very feminine and very masculine, and not wanting to pick a side. I grew up around a lot of masculine entities and masculinity rubbed off on me. I was always in love with women, and naturally femininity rubbed off on me. I forced myself to adhere to this socially acceptable mold of a women at a very young age. I grew up fast, and had a bad relationship with this side of myself. After realizing that I was blindly experiencing gender-based violence on a daily basis in conjunction to this prescribed femininity, I really wanted to escape.

Sometimes I’ll bind myself with tight chains and cover myself in fake blood to reflect the pain of existing in a femme body. Two years ago, around the time I began performing and exploring my character Petty Boots, i discovered that I felt most comfortable identifying as non-binary. This discovery spiritually and mentally freed me from the pain of adhering to a tortured notion of my ego and self. In this same way, my art has freed me when I place no boundaries on myself. I am queer, resistant and resilient and so is my art.

And how did the name “Pauli Cakes” come about?

I was a child and somebody else called me this name in passing and it stuck. I recently found out that my great grandmother was nicknamed “Polly,” so I think the name really found me.

When and how did you become a part of New York nightlife… and how would you describe your role today in that world?

WOOF… that’s a piece of history, babes. Growing up in NYC nightlife kind of swallowed me whole. I was in the 7th grade when I went to my first party. My hedonism has always been up in the clouds. I wanted to try everything once, and found myself constantly running away from home and school to go to hookies, getties, coros, teen bashes and parties in random areas of the Bronx. This sometimes led to finding myself in the middle of brawls, shootings, drama and other messy occurrences. I was fascinated with nightlife with forming bonds, going on adventures in the span of a couple of hours and meeting characters.

I began flirting with raves and parties outside of the Bronx like Electric Warehouse in Brooklyn, and sneaking into 21+ clubs. When i was about 16 /17 Melissa Burns booked me to host for what I recall as the first time. The party was called “Massive” at Left Field in the lower east side (now closed). I had a big personality and a lot of energy, and I felt at home in these spaces. Nightlife became my church, my place of worship, I hopped around a lot. It was the gritty, underground, messy, diverse New York City nights that kept me wanting more.

Two years passed. I moved into a co-op in Bushwick with 10 other creatives. At this time, I met some astonishing nightlife personalities, Jessa Angel and Julian Wildhack. These two showed me this whole other side of nightlife. More of a glam spiral; fashion-fueled, debaucherous, “fake it until you make it” fabulous world. I ate that shit up with a side of champagne and started getting booked, darling! Things kind of starting changing and molding themselves into what I’m doing now. Wow. It’s a whole thing… I’ll write a memoir one day.

My role in nightlife that of a sculptor of atmosphere and mood. Now as I’m becoming more hands on with throwing parties, I love bringing all the energie. Bringing people together, setting up the charm of possible encounters and euphoria by merely existing and casting a spell over the night. It’s like magic. Nightlife is very special to me.

What are some examples of extraordinary things you’ve witnessed or experienced in the realm of nightlife?

Spirits, energy, the moment when you’re taking it all in on the dancefloor but mostly the outer body experiences, connections and electrifying vibrations. Djing, hosting, producing parties and performing all put you in different positions in nightlife. Love, sex, realizations in the midst of strobe lights and synchronized energy. Sexy sounds pounding into your head, heart, feet and sex, everyone becoming a bit of everything else. I married a couple two years ago in a photo booth at the Boiler Room in the Lower East Side.  All of the sensations aligned to make people happy for one night, and then carrying on. Whether it’s been in São Paolo, Lisbon, or New York City, the connection formed and felt are the most extraordinary.

How do your club lewks work? Are they methodically planned and designed, or put together spontaneously? And what do you think inspires them?

They just work me goddammit! Ha! I rarely plan anything, I just get these downloads and sporadic ideas. I get inspired by my mood, my energy, sounds, my childhood, color, protection, textures and controversy. I envision looks as protection, a walking alter, I love the idea of being able to repel evil and protect myself through a look.

Where are we likely to find you hanging out on your nights off?

It all depends on my mood. I hate bars but I love good music and beautiful faces so I frequent Bossa Nova or Mood Ring in Bushwick once in a blue. I’ll be at a good party, if not, I’m home planning my next move and working on projects.

I read an interview with you and Possessed from 2017 where you were discussing a party you two were producing called Baby Curls. It wasn’t a trans / femme party per se but was definitely open to and welcoming of that population. Doesn’t it seem like many producers today struggle with creating events that are all-inclusive and enjoyable for everyone?

A lot of producers don’t necessarily struggle with inclusivity, they struggle with creating safer spaces and putting marginalized folks at the forefront. LGBTQI+ and POC have been the leading forces of nightlife and club music since the beginning of time, yet are the most underpaid and under represented by producers. You have to have guidelines and intentions for the spaces you are curating. We need to prioritize keeping our night spaces safe for everyone, not just yt cis people, for a lot of us this is our church. Inclusivity usually occurs when parties are produced by the people for the people.

DisCakes a multi-faceted platform, party, radio show, video show, and movement, co-founded by DJ She Marley Marl and I with help from our angels. DisCakes is a fresh widdle baby — she popped out for the first time last month. We’ve started the filming process and an ongoing party series, one of many to come. DisCakes is going to change the world! I can’t spill to much tea yet, but can’t wait for you to watch it unfold. We have a website in the works, but you could follow us @discakesnyc for more updates. We have some very special announcements coming out soon.

You’ll be a host for Susanne Bartsch and Linux’s PLAY NOW at 3 Dollar Bill this Saturday! Have you seen this space yet? It’s everything!

For sure! LOVE 3 Dollar Bill! I had a little residency hosting Tad Haes‘ Sutherland parties over the summer.

Susanne’s been having a Renaissance lately, between the Netflix doc and now a recent stint as a Drag Race judge. Do you have any surprising Bartsch facts for the children?

I performed for Susanne Bartsch’s On Top, and she was the first person to ever cut my panties off with my own knife, Ha!. 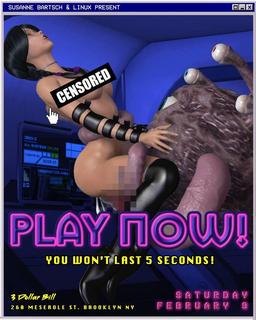 Anything else to mention?

I just touched down in NYC from DJing Miami’s annual queer festival Wigwood hours ago. I just want to say that I am SO inspired by all of the hard work the queer community out in Miami is doing. Continue to keep your parties and events intersectional and inclusive, I love you!  Also, very special projects coming out soon!