This body positive and provocative Brooklyn AFAB performer defies genre and expectations. New to the scene and here to slay, Thotyssey goes on a juicy binge with the one and only Chartruice!

Thotyssey: Chartruice, hello! Thanks for talking to us today! How have you been enjoying this unseasonable warmth?

Chartruice: Well, I just walked my dog Porkchop in it. And even though it’s a smidge colder, it still feels incredible, I gotta say. Definitely okay with skipping winter altogether!

That is true, yes. I will only wear wigs in air conditioning in the summer!

By the way, for the uneducated masses… what are you exactly, as far as performing goes? Would you describe yourself as a drag queen, a drag king, a burlesquer, all or none of the above…?

None of the above. I am, to put it simply, a performer. I do everything. I sing and act as well. I’m an alien of all trades.

Amazing! Have you always been an All Trade Alien, since you were a kid?

Yes. When I was really little, I was always writing scripts or acting out movie scenes in my room. I was too shy to do anything at school until I was in high school — then I got into theater heavy. I wasn’t just acting; I was also doing the makeup and helping the other kids learn how to do action stuff… like slow motion, etc.

Where was this, where you grew up?

I was born and raised in Alabama, then I moved to Indiana when I was 15 and lived there (went to IU) for ten years before I moved here four years ago.

Wow! What brought you here?

I fuckin’ hated the Midwest! Also, my ex-friend helped me move here because I was just so depressed in Indiana, and knew I was never going to be what I really wanted to be there: a star.

Indiana really is the worst.

Oh it’s BAD, haha! I call it “the state of passive aggression.”

How did Chartruice come about?

Well, I’ve been performing since I was 22. My name used to be Nina la Pêche. I liked it for when I was starting, but no one could pronounce it and I thought it was too centric to burlesque. I’d been thinking about changing my name for a while, and then one day I dyed my hair highlighter yellow. I started to realize I really liked green and that chartreuse was one of my favorite colors, then randomly “Chartruice” popped into my head. That was about a year ago, and it’s stuck ever since.

Yep! I always say “I’m Chartruice, spelled like juice cause I got the juice for ya.”

And how did you start performing here in Brooklyn?

The first performance I did in Brooklyn was in a basement at a private Nü Goth party with friends of my partner David. Then I moved on to amateur burlesque night at House of Yes, and eventually worked my way up to Bizarre Bushwick.

And I know you did the last season of the Mx Nobody pageant, where the host collective the Nobodies loved you!

Apparently! Haha. I had no idea they had mentioned me in your interview with them until Lacy Stoner pointed it out to me; I was smitten and honored. I love those bitches so much.

And you also did the Mizz Q Train pageant. How did you enjoy those pageant experiences?

I loved competing in them! But to be honest, I had to take a break from competing in drag competitions because I feel like it’s hard for people to comprehend that AFAB people can do drag, let alone win a competition. Mx. Nobody was very inclusive and I felt very welcome, but I wasn’t surprised to see yet another AMAB person win.

In fairness, the first two Mx. Nobodies were AFAB!

Oh, I didn’t know there were other Mx. Nobody competitions! That’s good to hear! I knew they were bad bitches!

But in general, you’re right. Even though there is a growing number of AFAB queens in this who are slaying it, most folks — even the seemingly obsessed-with-inclusivity Brooklynites — seem to keep the AMAB queens on the pedestal. What gives? Is this the Drag Race Effect?

Yes, for sure. Ru has made it quite clear how she feels about AFAB queens and… well, she’s wrong.

There was quite a gag with Naomi this week! Are you still watching the show?

No. Because of all the shit Ru said, I stopped watching a long time ago. The last episodes I saw were the two viewing parties I co-hosted, one with Ariel Italic and the other with Pinwheel Pinwheel, so I have no idea what’s happened since then. I saw all the memes of Naomi bent over in what looked like the winning move of a limbo competition, though!

She’s certainly bendy! And good for you in standing your ground! Do you get outright political in your own performances?

Yes, actually. I do a lot of acts involving periods or my vagina, as a big fuck you to vagina-phobes. I have a US politics political act, too. It involves Trump’s “balls” (oranges) and a hammer.

Oh my, I can picture how this goes down! In general, what’s your favorite number to do?

Are audiences, like, horrified by your more explicit performances, or do they generally dig it?

Girl, they go fuckin’ nuts. I love the idea of doing hypersexual things while fat. And others love it, too. I like to enforce the idea that fat girls can be just as sexy, and the audience can feel that vibe. I LOVE IT!

Big girls lead the way! Well, you’ve got some gigs coming up… Monday you are with another Brooklyn AFAB all star who is finally getting her own weekly show: Miss Crimson Kitty! The show is Meow Mixx Monday at Brooklyn’s newest venue, The Vault. And Lacy will be there, too! How great is this?

Yeah, I can’t wait. This is the kind of platform I’ve wanted to perform in for a while. And it’s my first time working with Crimson, so I’m super excited! 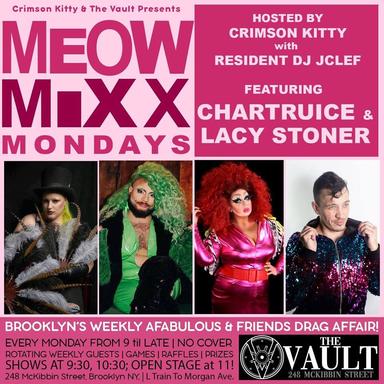 And after that on Tuesday, you’ll be at the gothy Saint Vitus Bar for “A Valentines Day Party For Filthy Fucks,” aka “Like An Animal.”

Are you a V-Day hater?

I am. Loving someone isn’t about the money you spend on them, but the time you have with them. And V-Day has just become another commercial holiday, so meh. Ha! 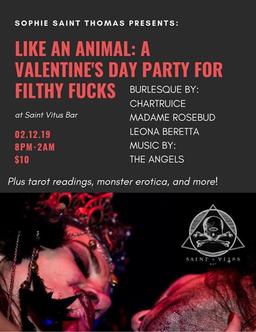 Yes! On Valentine’s Day I will be in Vylette Tendency’s “Queer as in Fuck You” at Otto’s Shrunken Head where I’ll be performing my political act… 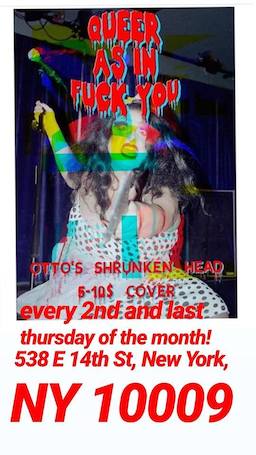 …and right after I’ll be performing at my new job, The Box.

Ooooh, werk that Box! Final question: What will the title of your eventual autobiography be?

Squeeze Me: the Life and Times of a Star.