A sensation of Australia’s stages and screens, actor / singer / drag performer Tyler Ashley is about to make his New York performing debut in a major way. Thotyssey’s got the skinny on one of Liza’s greatest interpreters (and one of her manager’s least favorite people)!

Trevor, thanks so much for talking with us! Did you per chance catch the televised RENT live production? Yikes! What do you think about the whole live TV musical thing that’s been happening these past few years… assuming they air in Australia?

You know, I haven’t as yet. Though I read the scathing comments from people about Valentina’s Angel. Ouch! We don’t get them live, so for show queens like myself, we have to go digging and find them online. I really liked the Hairspray Live, and liked bits of The Wiz. I didn’t mind Grease either, but it loses something on YouTube! I wish we did the same thing, but we’d end up with really inappropriate pop stars playing roles they shouldn’t… oh, wait.

You’ve had a long and very successful career in Australia as a cabaret stage star both in and out of drag, and you’ve won much acclaim and several award nominations over the years with drag characters in productions of Priscilla and Hairspray. Do you consider yourself a drag queen, or would it be more accurate to say you’re a performer who sometimes does female characters?

I think the latter. I certainly was a drag queen working in the bars in Sydney for about five years… it was actually what helped me get my first musical which was Priscilla. But Musical Theatre has always been my passion, and when I was a kid that’s all I ever wanted to do. I eventually got there, but I went about it a strange way.

How would you describe the Australian drag scene to people unfamiliar with it?

Really, it’s not dissimilar to Priscilla, the movie. Aussie drag is mainly mimed and is often performed in production shows with beautiful custom costumes and fully choreographed, which I find doesn’t happen a lot over here. And we NEVER take tips while performing. I still find that so strange that girls here have to collect dollars while trying to do a number.

Courtney Act is an Aussie queen we know quite well, and you’ve collaborated with her in the past. She’s still a big star post-Drag Race, thanks to (among other things) winning Big Brother. Will you two be working together again in the near future, do you think?

Oh look, you never know. Our show Gentlemen Prefer Blokes was a big hit across Australia and we’re still great friends — she’s certainly done amazing things. Her career has differed from mine quite a bit… she’s obviously the world famous one. But you know, not all of us want to enter every single reality television show that pops up. Every. One.

Today’s pop singers are fun, but few have those massive personalities (or chops) like Liza and the Divas of Yore. Do you think anyone on today’s Billboard charts could resonate the way Liza has?

You know, I think it will be Gaga. I think, however, that she’s the only one. Her talent is incredible, and I would love to see her become a legend. The fact that she can sing jazz with Tony Bennett and then act with Bradley Cooper means she’s on her way.

You’re known for your diva impersonations. Who were your favorite divas growing up? (I think we can guess one!)

Haha yeah, one is obvious. Shirley Bassey is probably my favourite – that huge voice and those songs are extraordinary. I also love Bette Midler, who I discovered through Big Business – what a great movie! Tina Turner is another fave, and of course there’s Liza. I’m surprised I didn’t realise I was gay until I was 18… but then, it was the 90s.

Your Liza, of course, is pitch perfect. Every queen thinks she can do Liza, but you have every nuance down. When did you start performing as her, and what is it about her that inspires you so much?

I’ve been performing as her for about 10 years. I kinda fell into “doing her” by accident. I was performing on an Atlantis cruise, and the crowd kept making me do more and more songs… I’d literally done every song I had, so I ad libbed a Liza routine and they went nuts. I thought… there’s something in this! I think I’d watched her so many times it was just inherent. She lived somewhere inside me.

Have you ever gotten any feedback from the real Liza?

No, only her publicist… who HATES ME! I tried to explain to him that really I love her, but he wouldn’t have a bar of it. Lots of people close to her have seen my impression and think it’s scarily like the real thing, but I don’t know if I could ever do it in front of her. I would freak out.

Let’s talk about your upcoming New York debut! How long have you been wanting to come here to perform?

Forever and ever. I come here every year and see the Broadway season, but have never performed here. I’m at the same time incredibly excited and shitting myself. The first time I came here I was only 20, and fell in love with the place. I knew only 2 people here… I remember my friend Leo Nam (who is now on Westworld) was studying acting here and he introduced me to martinis… and I introduced them to the hallway and the bed of where I was staying. Ah, the memories.

The show is on Monday February 4th at Sony Hall, where we recently had our GLAM Nightlife Awards… a gorgeous venue. Tell us about creating Liza’s Back (Is Broken) and what we can expect from the show!

The show is a “what if…” version of Liza’s career. It’s her playing all those parts that you wonder what would it have been like if she’d done them. So Liza shows you her versions of why she was originally cast as Fantine in Les Mis, Maria in The Sound of Music, and as Grizabella in Cats to name a few… and the reason she turned them down. There is a fantastic seven-piece band, and lots of belting. You’ll love it. 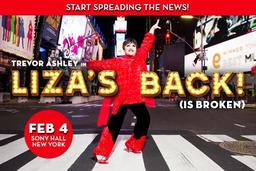 Will you have time for any touristy stuff while you’re here?

Only seeing a few shows. I’m seeing The Cher Show (another fave diva), and Network, but I’m sure I’ll catch a few other things. I’ve been here now every year for 20 years, so I’ve done most of the touristy shit.

Anything else we meed to know?

The original album, Liza (on an E) is available on iTunes, to get you in the mood for the show.

Final question: who is a diva you’ve never yet impersonated, or maybe a role you haven’t played, that you’d like to do someday?

I would like to play Mrs. Lovett in Sweeney Todd. It’s one of my favourite parts of all time and I feel like it’s a show where a man could play it. I mean, why not, right?