Thotyssey’s column “ThotLight” reviews and reports on the big events in NYC nightlife.

The last place I expected to see one of the zaniest, most gonzo drag shows in recent memory was The Laurie Beechman Theatre, home of classy (but with poop jokes) fare from stars of the drag cabaret scene like Paige Turner, Sutton Lee Seymour and Jackie Cox. But holy crap, The Simsinz was wonderfully weird and raucously funny… taking the best clips we remember from the early (i.e.”funny”) seasons of The Simpsons seminal animated comedy and warping them through the draggiest of lenses.

Nearly the entire production is lip synched–dialogue from The Simpsons mixed in with lines and songs from Broadway and other media to create a heightened narrative–by the show’s draggy cast playing the titular family: Miss Stonewall 2019 Cissy Walken (Marge), Coco Taylor (Homer), Aria Derci (Bart), Pussy Willow (Lisa) and the towering Andy Starling as baby Maggie. And if you were wondering how femme queens Coco and Aria would interpret Homer and Bart, you kinda have to see it to believe it: it’s magically monstrous. You will blink like White Guy from that GIF, and then you will gaffaw. And noteable: Pussy and Andy’s yellow coned wigs that perfectly capture the strange shaped coifs of their cartoon counterparts. 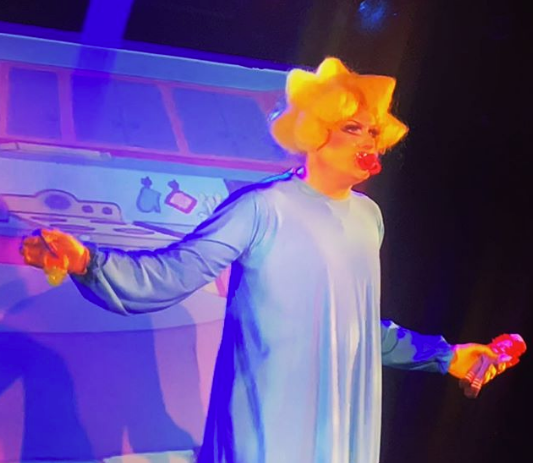 Much of The Simsinz’s content is mined from the long-running TV show’s gay-themed episodes… of which there were a lot more then I remembered, and Smithers isn’t even mention once. Do you remember Homer being gay for an episode? Gurl! Also, it’s nice to revisit Lisa’s environmental activism in the Age of Greta, and to see a drag exaggeration of harried housewife Marge obsessing over bleach. Basically, if you found any era of The Simpsons to be life-alteringly funny, you will enjoy The Simsinz… not least of which thanks to the funny cast of queens (who all co-wrote the production) best known from the oddly connected drag scenes of Astoria’s Icon Bar, the West Village’s Rockbar and The West End uptown. The drag of these venues is very Broadway-oriented, but peppered with an old school weirdness.

The queens double as some of The Simpsons‘ principle supporting characters as well. I won’t give them all away, I’ll only say that it’s really up to my therapist to deal with my new strange attraction to Milhouse. And at one point, the audio track stops for a real, lovely but still funny moment that you should discover for yourself.

The Simsinz returns to the Beechman on October 11. Don’t have a cow, man, just be there.

Jim Silvestri is the creator and editor-in-chief of Thotyssey.