The recording artist, beauty blogger and nightlife host has full androgyny and fierce starpower on the menu, and this weekend they’re serving a full banquet for a special Thotyssey event. Let’s get close and personal with Se[hora star Robert Garcia!

Thotyssey: Hello Robert! Did you do anything for July 4th?

Robert Garcia: Holaaaa! Yes, it was fun! I worked and got to see the fireworks off my Bronx rooftop.

Don’t you wish you could make fireworks come out of your boobs, like Katy Perry in that video?

Yes I do! I mean, without the boobs part… I prefer the man chest, lol!

That would be a true BoyGirl Moment that Robert Garcia is famous for!

So, are you a native New Yorker?

Yes I am–born in Brooklyn, and traveled all over NYC ’til my current location, The Bronx.

And were you always a singer?

Yes. I actually come from a background of singers. My twin brother sings gospel music; he has an EP. And my other siblings all are in touch with their creative or musical side.
I’ve been writing music since I was 6 years-old.

What were you writing and singing about when you were six?

I had a pretty tough childhood. I got to see a lot of things that’s weren’t for the eyes of a 6 year-old. I remember my parents reading my poetry… it would be four lines that made no sense, but individually I was expressing a lot of sadness. Abandonment. Then as I got older, I would add to those songs… and it’s actually influenced my current music.

You present and perform now as androgynous, emphasizing male and female qualities rather than, say, full drag. And you keep your given name instead of taking a stage name. How did that all evolve as a performing persona?

I’m named after my dad, Robert Garcia. Growing up, I always knew I was different. I also knew I wasn’t just one thing. I knew there were dimensions to me that I couldn’t recognize… but the world did. They’d call me female pronouns, even when I had no makeup. I’ll be honest, in the beginning I didn’t like when people did that… because I didn’t understand what was so feminine about me. Then I embraced it. At 14, I started working on my first EP–which was trash, lol! But it was a learning moment in my life. I started to wear makeup, discreetly.

I am gender non-binary, because I do feel like I am a genderless soul. And if I had to choose I choose both. To me, a drag queen goes home and takes it off, lives her normal life,  transforms when they aren’t on a stage. As per myself, I am female 50% of my life: career, doctors, meetings in corporate.

You’re an inspiration! I just watched the clip from your song “Baila Baila” on YouTube, so much fun! How much music do you have out there at this point?

I have one album with seven songs, and five singles. I’ll be releasing two more albums before the year ends.

How do you decide whether your song lyrics are going to be in English or Spanish?

I know based on the rhythm.” Baila Baila” called for Spanish. I’ll be re releasing some songs [new] in Spanish, too.

How did you meet your nightlife partner-in-crime, Jayse Vegas?

Well, one day when I was, like, 18-ish I believe, we followed each other on social media. That same evening, we bumped into each other on the train. We looked at it as a sign, and stood close since. In the midst of our friendship I was in a horrible relationship, so I wasn’t really doing music and shows. But as soon as I left my ex, I ask Jayse for a stage, and he gave me a show. Since then, we kept going. And now we’re on fire!

You two currently co-host a hit weekly show at the unlikeliest of venues, the Offside Tavern. “Feels Like Vegas” is every Wednesday night, and also features DJ Senerio and drag queen Aria Jae. You and Jayse get to perform your original songs and play around with covers each week. How is that night going?

It’s going amazing. We see more and more people. What I love the most is, Offside is predominantly a straight sports bar. So for us, to be able to perform original music and gain the crowds that we do from both communities is amazing. It’s beautiful. And the team is amazing as well. 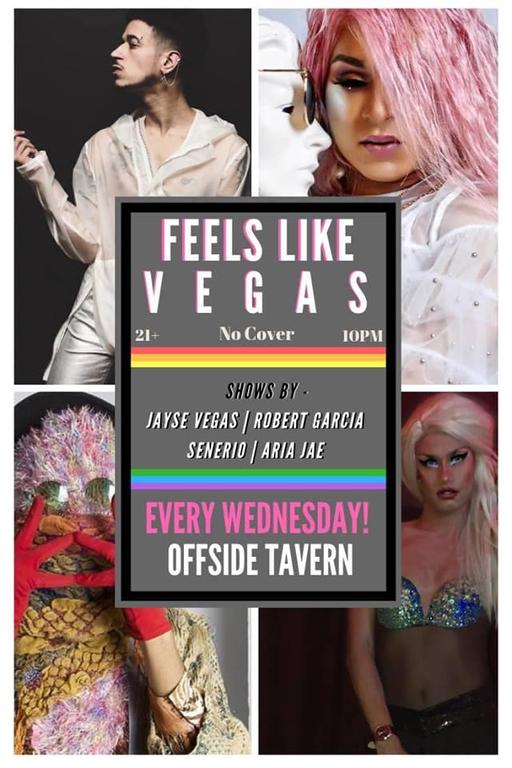 You also hosted a big weekly party for Riggz Entertainment, which until recently was up in The Bronx.

I did Frescura Fridays, with my house father Riggz–who named me Beauty Famouz.
It was amazing, I loved it. But, unfortunately it just got real shady. There were two sides to the club: one that was mostly playing Latin music (which was the Frescura side), and other Caribbean music. It started to feel like the other promoters wanted to compete, and it got shady. We managed to pack the house down before we farewelled–that’s all that matters.

Generally, is it a challenge for folks like you and Jayse to get lots of nightlife gigs, when the biz is so invested in just drag and DJs?

It’s actually not that difficult. I’m booked at least three to four times a week. I’ll take it! It’s also amazing–most places are willing to invest in my craft, so the booking fees are always met. There’s a huge difference in what I do compared to all in nightlife. And that’s what makes it so beautiful!

I’m so happy that you and Jayse are gonna be co-hosting Night of 1000 Thots on July 13 (8pm) at Pieces Bar! That’s gonna be my birthday, Thotyssey’s blogiversary, and Honey Davenport’s afterparty for her Laurie Beechman Theatre show Raw & Unfiltered all in one! How sick will this night be?

Yes! I’m working on releasing the “HELLY” music video. Ever since my one million view campaign with Sephora, so many more campaigns and opportunities coming my way. Just got to watch out for it.

On that note, I guess we’ll end it with: what are the beauty products you swear by?

Dior Backstage foundation. And the Sephora Collection gives me life, and fits the budget.

Thanks, Robert… see you Saturday!

One thought on “On Point With: Robert Garcia”