This lovely Imperial Court queen has become a staple of Fire Island drag, and was recently rewarded one of that community’s highest honors. Now she seeks a coveted NYC pageant crown that could very well put her in the HERstory books if she wins it. Please rise for the amazing Victoria Falls!

Victoria Falls: Yay! At first, I wasn’t quite sure she would make it to the top. But I thought her drag was interesting, inspiring, and certainly different from the rest. She took the critiques and elevated her aesthetic each week, so she definitely deserved the win. She also has a great personality, and I’m sure she is a pleasure to work with. Congratulations Yvie Oddly!

We’re definitely #TeamYvie here in the Thotyssey Offices! Were you watching the finale on Fire Island?

I watched from home in the city, preparing for Miss Stonewall Sunday. Rehearsal tonight, and then off to the island for Homecoming Queen duties on Saturday… then back to city Sunday morning.

Lots of exciting things happening! We’ll get to all of them in a bit, but first: the origin story! Where are you from originally, and were you always a performer of some sort?

I was born in NYC and raised in Queens. I was an artsy kid who played with Barbie, made clothes for Barbie, and was inspired by Barbie and my southern mother who never left the house without full face and hair done. Growing up, I was into drawing and painting and was awarded at the Met in high school, which led me to go to college to pursue theatre and costume design, where I ended up having a fashion career.

I started drag as a child dressing up in mom’s clothes, but really in college is where I learned makeup / mask from theatre…  and then the rest is history. I just love the creative process of transforming and performing. Victoria is a character.

So how did Victoria come into being?

I was living in Astoria, Queens at the time, and I was a frequent patron of Albatross Bar. One night, the owner asked me to host karaoke, and I was so excited I said “Yes, of course!” Then she said “I want you to do it in drag….this weekend.” I literally had a week to pull it together, and my first drag name for that night was “Tequila” something… I can’t even remember, it was so long ago! It was awful, but super fun… I remember being so nervous, but so carefree. I thought I was the hottest thing, but looking back I’m like, what a mess! Sometimes, I think back on that time before I go on stage so as not to take myself so seriously, and remember how fun drag can be… and is!

Victoria came about when I started to pursue drag after that karaoke night, and got involved in the community. I was just “Victoria” then, which comes from Posh Spice (Victoria Beckham) from the Spice Girls! Then at my first “Night of a Thousand Gowns” someone asked me my name and commented how tall I was, and said “you are Victoria Falls, tall like a waterfall.” So it stuck!

Night of a Thousands Gowns is the big annual gala fundraiser from the Imperial Court of New York, queer charity royalty that you’re a titled member of. How did that association come about?

I was first introduced by my hairdresser and best friend Karmela Lozina (“The Hairgirl”) when she was stood up for their annual holiday party, and was telling me about it. So I said, “why didn’t you call me, I would have gone with you!” Then she said, “come to the ball,” Night of a Thousand Gowns! She said I had to go in drag, of course! One of the best nights of my life. We [became members] the following month, that was in 2011.

I actually just pulled out my very first gown, and am donating it to the drag tag sale on Sunday, June 9th at the Ice Palace from 12-3pm. so if you want a piece of history from the Homecoming Queen / Miss Ice Palace, I suggest coming to the Drag Tag Sale as there will be lots of fun clothes, shoes, jewelry, makeup and wigs, pre-styled or styled on the spot as we have a hairdresser at the table. It’s going to be the best one yet. 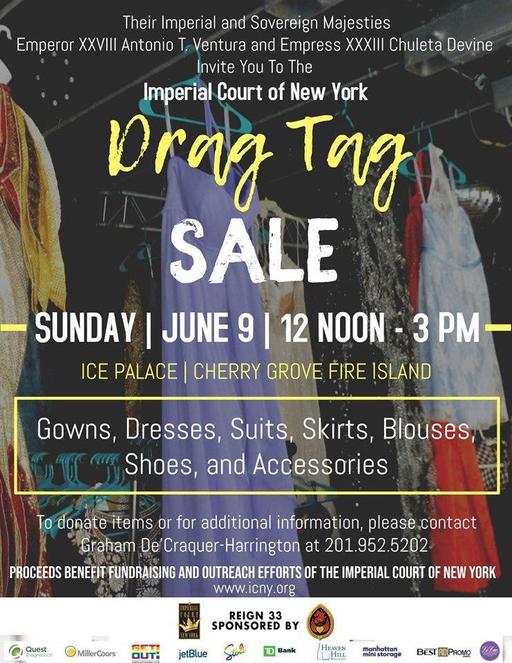 Also, because it is my year to create an epic Invasion, just wait ’til you see the front of that boat. The Gagalonza will truly be happening on July 4th this year on Fire Island!

How did you become a part of the Fire Island scene?

I first started going to Fire Island when I was in college, around 18-19, and immediately fell in love!  My dean and his partner invited me in the Pines and tried to find me a Daddy, which I was never the type for personality-wise. I could never be told what to do, or live under someone’s shadow or by their lifestyle. I have a very strong personality that requires an equal.

I met my ex, and we visited the Grove frequently and fell in love with Porsche, who I would constantly beg to sing Shania Twain (she can verify). I was obsessed with Shania at the time, and after hearing Porsche sing, it was always a favorite! I took a break and started day tripping then doing shares in 2009. The last 5-6 years, I’ve been heavily invested in my Fire Island community, and it is where my heart is.

There’s already been a bit of action on the Island this summer, particularly with the Ice Palace! There was a delayed opening there, as the Grove Hotel had to wait for its fire extinguishing sprinklers to pass inspection. Were you worried?

At first, yes… because everyone was posting about it online, adding extra narratives. I texted and emailed the right people, who let me know everything was on schedule to open. The Ice Palace is open for business! The pool shows are now hosted by Brenda Dharling and Ariel Sinclair! Their new entertainment manager–and host of her own  three shows–is Electra. Lots of fun things happening at the Ice Palace this summer season. I’m planning to be at quite a few shows throughout the summer.

And meanwhile, something else exciting has happened on the Island… you were crowned Homecoming Queen! This is a part of a very long-lasting Fire Island tradition. Congratulations!

Thank you, it is such an honor! And to be amongst such Fire Island royalty is a lot to live up to. I am so touched that the community welcomed me with such open arms.

It is quite the magical experience. You kind of don’t realize what is happening when everyone is cheering for you. And when they call your name, something comes over you and you’re in another world for a moment–or at least I was–and my face froze with a smile. I couldn’t stop smiling all night. I can’t wait to represent, and Saturday is the first event. So if you’re on Fire Island, please come to the PAWS  benefit at the Community House. 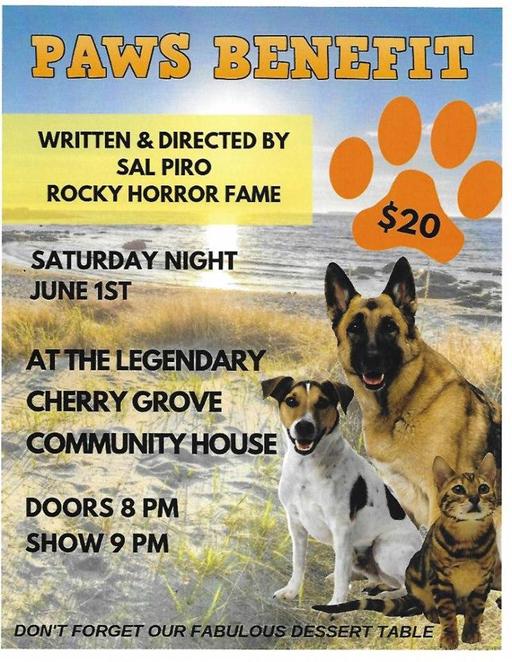 Here in NYC, Stonewall is gearing up for World Pride… which means we are in for a massive June. It also means that this year’s Miss Stonewall pageant is going to have a great deal of significance. And you’re gonna compete! How long have you been thinking about entering, and how excited are you?

I have been wanting to enter for years, and Stonewall is legendary… especially this year with World Pride I felt all the stars align, and it was my time to compete for this specific title. I have performed at Stonewall many times, and recently had my own Invasion show which was a full house! I couldn’t have asked for anything more than the support of my friends and community for just showing up!

In the past I had to pick and choose, as pageantry is expensive. I’m thinking of starting a GoFundMe page, because I’d love to compete more, and feel I have developed into the full package.  So I’m beyond excited!

Can you give us any spoilers for your Stonewall presentation? 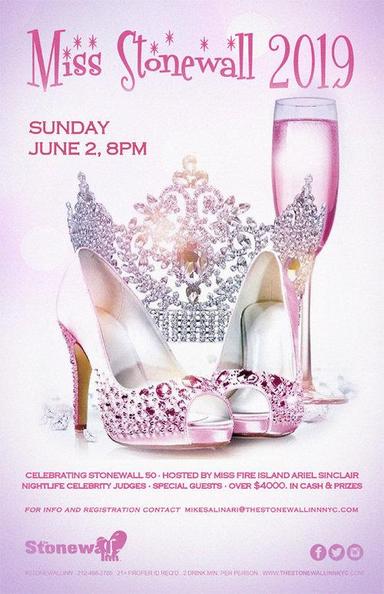 Yes, lots of guest spots on Fire Island and in the NYC. Check out my Instagram and Facebook for show dates/events. Miss Fire Island on September 7th! I’m hoping to get into a few other pageants… will have to start a few fundraisers to get there. I can’t do it alone, so community is very important… and being able to represent really makes my heart glow. I love our LGBTQ community, and hope to represent where I can to raise awareness and bring light to LGBTQ issues on many platforms.

The best is the complete transformation, and becoming a character. Once that wig pops on, let me tell you… she starts twirling! I love meeting people in drag who come to see you and you completely transform their day; could be from watching you perform, a smile, or just stopping to chat. They could have had the worst day, and maybe your interaction with them can turn everything around. That is the beauty and art of drag!

The worst is peeling the glue from your brows and hairline… oh, and how you feel from heels and leggings. The snowsuits we wear are quite taxing on the body.  So remember kids, we when you see a complete look, that’s for you. Show a girl some love!

You got it, Victoria!