Inspired by the seedy glam of the Warhol Factory and raised on a healthy diet of (stage) drama, this towering, Stella Adler-trained performer is about to ring in her Carrie Bradshaw-approved tenth year as a New Yorker in grand fashion. Andy Starling shines in this exclusive chat with Thotyssey!

Thotyssey: Andy, hello! How are you this rainy evening?

Umbrellas make the best accessories! So, let’s get right into this. It would appear that Drag Race fans are displeased with Nina West’s elimination and Silky’s continued presence on the season. There does appear to be some general fatigue happening with the show, at least among gay fans. Could we maybe be seeing the beginning of the end of Drag Race, at least as a Gay Sport?

You watch your mouth, Silvestri! They’ll hear you…

I think there definitely could be some fatigue going on, especially with the format of All-Stars going right into a new season. But I suppose it’s supply and demand. We’ve demanded it, and they’ve been supplying it in spades. I think it’s become harder to be disillusioned by the reality aspect lately, with social media being a bigger factor these days and more and more local queens making it into the show. Everyone’s an insider, and nobody’s a novice viewer anymore.

Someone once told me it’s like they’re entering the vaudeville circuit once they leave the show, which is hilarious and true.

Have you ever given thought to auditioning?

I think we’ve all fantasized about what we would do if we auditioned, or what we would do for certain challenge… but it’s never been my end game. I’m not cancelling out the possibility, but I didn’t start drag to get on Drag Race.

Let’s talk about your life before you started drag! Where are you from?

Haha, how long do you have? I was an Army Brat…

Ah, so you’re from everywhere!

Born in North Carolina… moved to Texas, D.C., back to North Carolina, and then to Tampa, Florida… all before the age of 11. We stayed in Tampa for a while, and I graduated high school there.

Hometown life was ever-changing, obviously. And once I made friends in one place, it was usually time to move on to the next. So, I guess you could say I was primed for a life in the performing arts? I learned how to make fast connections, but also understood that you say goodbye for now… but not for always.

Yes, lots of entertainers come from that background of moving around a lot as a kid and having to adapt to different environments on the fly.

Yeah, it really is a funny dynamic because it’s so extreme. You love the group of people you’re with so fiercely for a contained period of time, and then you may never see them again.

And when did you discover the performing arts?

I started performing when I was a little kid. My parents tried me in sports, but I would stand in the middle of the soccer field when I was five and wave to them instead of running after the ball. I got clocked in the head with a baseball when we tried little league… and I think it left a dent, because I definitely had the imprint of the baseball stitches on my forehead after. Which explains a lot.

Ouch! So it was musical theater from that point on?

It was a mix, yes! I started acting in plays and musicals a lot around fifth grade, once we had stayed in North Carolina for more than a year. One of my favorite roles to date was the titular character in Scrooge! The Musical at the tender age of 9. I did a British accent (that no one asked me to do) and knew everyone else’s lines, which I mouthed along to. I would whisper them their lines if they forgot them, like the true professional I am.

I also did a show choir called the Red and White Jammers, where we would do hand-ography with colorblocked gloves (hence the red and white color story). We were serving high art, darling.

And then did you ultimately come to NYC to pursue theater?

I did! I went to Florida State and double-majored in Theatre and Studio Art, and when I graduated I didn’t really know what to do next. I did one of those cattle call theatre conferences where you audition for a bunch of schools, apprenticeships, tours, etc, and was invited to study at Stella Adler for the summer conservatory. It was very spontaneous, but I was itching for more focused training… and it was an easy way to move to the city. I was only supposed to be here for the summer, and I ended up staying.

Do you have any favorite roles you’ve played here in NYC, or since you’ve moved here?

Ohh definitely.. I played Francis Flute in A Midsummer Night’s Dream, which was a role I also did in college.. Flute plays the female lover Thisbe in the play within a play, and it really exercised my inner child and my sense of humor.

I also played a version of Holden Caulfield from the Catcher in the Rye (which is one of my favorite books). It was in an Off-Broadway production of a new play, and remains the highlight of my New York acting career. Thus far!

That’s quite a diverse resume.

Yes, it’s funny. I tend to play opposite ends of the spectrum.

When and how did drag come into the picture?

Drag came into my life, because I felt like I was hitting a wall in my acting. I’m a 6’3″ male-presenting human, and those “types” are usually pigeon-holed into very specific roles unless the director or creative team has an imagination, or is going against type.
I found myself being excluded from playing emotional truths that resonated with me because of my body size, height, and gender.

So, outside of incorporating elements of camp and drag into theatre I was already doing (like Thisbe in Midsummer), I started to imagine a drag persona that resonated with all the sensitivity and glamour that existed in my heart and imagination.

Where was Andy’s first appearance?

Though I dabbled in Halloween drag a few years before, the night I debuted Andy was at the Season 7 finale of So You Think You Can Drag? at NWS. At the finale, Gilda Wabbit  (née Beverly Leslie Sills), who had been a contestant that season, approached me and was so kind and encouraging. She saw potential in me, and said she was starting to have gigs and if I ever wanted to guest to hit her up. I sat on the invitation for a minute, and then followed up in Spring of 2017, when I first performed as Andy at Albatross Bar in Astoria for Gilda’s Bawdy Bingo.

You later went on to participate in the first season of another drag competition, Iconic at Astoria’s Icon Bar. That one is known for being multi-faceted and challenging. Did you enjoy the experience?

It was extremely challenging, and pushed me as an artist. After acting for so long and being a vessel for the words of others, the competition gave me the opportunity to discover my own voice and present what I want to say when given the opportunity. I also made a lot of friends, and felt much more involved in the community. I definitely feel like I made a name for myself, and achieved all I had set out to.

So, I’m gonna guess that your drag name is an homage to Andy Warhol’s famed film ingenue, Candy Darling.

Was Candy an influence on you and your drag?

She was! I had been really searching for a drag name that fit the point of view that I was coming from. While I love pun names, it didn’t feel right for what I ultimately would love to do in drag, which is act. So I wanted a sort of glamorized version of my own name, which is–spoiler alert–Andrew.

I was watching the documentary on Candy called Beautiful Darling, and she really represented a beautiful dichotomy to me–the artifice of the Silver Factory ’60s /early ’70s, and the old Hollywood ’30s starlet that she played within that world. I became obsessed with decades referencing other decades, which felt very drag to me as well… so I used to refer to Andy as “Daisy Buchanan goes to Studio 54.”

You frequently sing live when you perform, right?

Yes, I do live sing… but I’m enjoying doing more lip sync mixes, and embodying song arcs through lip sync. And one of my classic numbers–one I’ve been doing since I debuted Andy in Gilda’s show–is the five minute audition monologue Parker Posey does in the deleted scenes of Waiting for Guffman.

Hilarious! So, wow–you’ve been a New Yorker for ten years now! Did it fly by?

It really did. Now that I’m in my thirties (shh, don’t tell anyone), it’s really peculiar to be able to look back ten years and remember a time when I was still considered an adult–
albeit a young adult. But yeah, time flies, as they say.. or something.

It sure does! In fact, you’ll be celebrating your 10th anniversary at Uncle Charlie’s on Friday, May 17th. Tell us about this showcase you’re starring in, Okay, I’ll Stay!

As someone who’s moved around a lot, I wanted to celebrate a personal milestone of living in one city for more than a couple of years. And as a big Sex and the City fan, Carrie Bradshaw says you become an honorary New Yorker once you hit your ten year mark. So that was enough of a reason for me to celebrate!

I’m bringing together a mix of nightlife entertainers (i.e. drag queens) and cabaret performers.. all of whom I’ve known at various stages of my time in New York. I was lucky enough to have the support from Uncle Charlie’s Piano Bar. While not a drag venue, they have been very supportive of my drag and have given me opportunities to host special events.

When I was pitching the idea to bar manager Joseph Koh, we realized the timeline we were looking at corresponds with AIDS Walk New York 2019. So it felt like the perfect event to raise money to benefit the Uncle Charlie’s AIDS Walk team, and bring together a bunch of folks for a great cause. At this point, being a “New Yorker” really feels like giving back to the city that’s made me.

It should be an amazing show!

Thanks! I’m so excited my talented friends said yes. 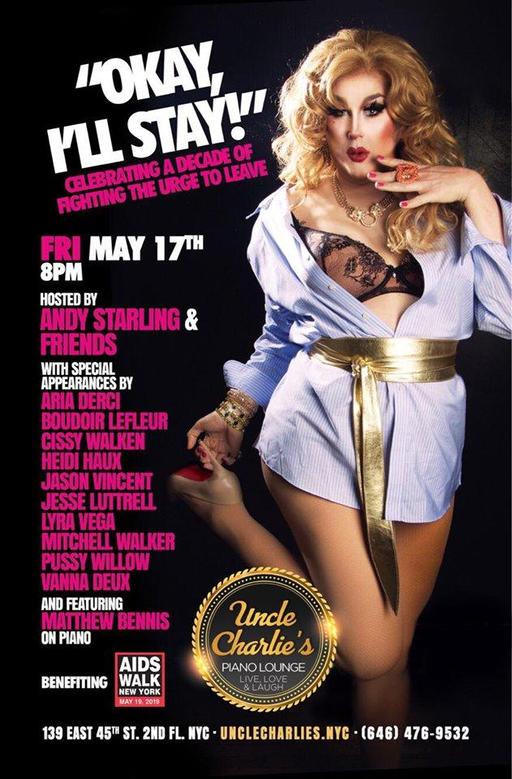 Anything else on the horizon for you?

I’ve had a cabaret in my heart for quite some time. I’ve got the concept, a creative team, and the songs… but I need to write the book. That’s probably going to be my next project once this show is over!

Very exciting! Okay, in closing: Now that you’re really One of Us… what is the worst thing about living in New York, and what is the best?

Ooh, hmm… Worst: the lack of privacy. I miss singing in my car. Best: 24 hour diners.

Heard and heard! Thank you, Andy!