Once an underage bar staffer making it work in the NYC bar scene, here now is a major producer of one of the city’ most important annual drag pageants and charity events. It’s the one and only Shane Terenzi!

Thotyssey: Shane, hello!  I know you must be pretty busy at this point with pageant preparations… how are things going?

Shane Terenzi: Things are going well! Crazy as to be expected, but it is all starting to fall into place. I feel like quoting the Drop Dead Gorgeous line: “with one week to go before the pageant, I was finishing my outfit, rehearsing my talent, brushing up on current events, and running 18 miles a day on about 400 calories. I was ready!”

That sounds about right! How many years has the Miss Hell’s Kitchen pageant been happening now? And bonus: who have all the previous winners been?

Ha! We started in 2012, so going into its seventh year. There was one extended year, so it is actually our 7th pageant. Honorary MHK is the amazing Peppermint; MHK ’12 Bootsie LeFaris; ’13 Tina Burner; ’14 Brenda Dharling; ’15 Monet X Change; ’16 Vita Summers; and reigning ’18 Lady SinAGaga. If that is not a powerhouse of queens, I do not know what is!

It’s quite a pedigree of queendom! And it’s all for a good cause, but we’ll get to that in a bit. First off, a little background on the Man Behind it All! Where’s your original hometown, and what was your intro to the performing world?

Born in raised in Middlebury, CT. I went to college in LA at Occidental College and got my degree in Theater Production. Lived in NYC in a year off during college when I was 20 and then after I finished. Throughout my entire life, I have always loved the performing arts and figured out that being behind the scenes and producing events was a perfect fit. In LA and NYC, I worked with a great production company that produced award shows and fundraisers so when I worked in the nightlife industry. I wanted to bring that facet to the events.

Tell us about your history as a part of New York nightlife!

I love the nightlife industry and family. It is what really helped me find my footing as a young gay man and let me discover who I was, without having only one type of person around me. That is the beauty of nightlife–most every person has come into a bar and experienced what that is. My first bar job was as a barback at The Monster at 20 years old! I wasn’t allowed to drink, but you can serve at 18 in NY! I was only there for about a year, and then went back to LA to finish my degree.

When I moved back to NYC, I was a cocktail waiter and then bartender at Therapy Bar for almost five years… if my memory serves me right!? Once you were part of the Therapy family, you did what was needed! So I ran the lights for shows, helped the queens out whenever necessary, etc.

Therapy wanted community involvement, so when I decided to do the AIDS LifeCycle and needed to raise money for it they were all about donating their space to create a place for the first MHK!

A brief note on the gay HK nightlife community: its detractors say that everyone there is bougie, but really there is such a strong sense of family and community between all the bartenders, bar staff, drag queens and other performers there. Lots of people in that scene were drawn to the city by Broadway and showbiz, and I think those are the ties that hold everyone together, right?

I have made the closest friends in the HK community. People that I would trust with my life. I was welcomed with complete open arms to that community, and really encourage people to get to know their bartenders and servers.

From the outside, the HK bars are not like every gay bar around the city. They are aware of the way their bars look from a purely physical way – which I appreciate! I absolutely love a dive bar, but that is not the norm in HK. Is the entertainment top notch? Yes! You are steps away from Broadway theaters. A lot of the people working are legit professional performers. I think it is easy to cast a general stereotype on a whole area, but if people really get to know the HK bars and who work there, that opinion from the detractors goes right out the window.

Well said! So, Miss HK started out as a benefit for AIDS LifeCycle (which itself benefits AIDS prevention and treatment), a a not-for-the-weak bike tread between Los Angeles and San Francisco.

I had friends that rode AIDS LifeCycle and told me about their experiences, and said that I had to try it once. I did, and absolutely loved it. We donated the money from MHK for the first two years to AIDS LifeCycle, and since then have donated the money raised to Cycle for the Cause. I thought it was important to have the money raised within the community donated right back to those within the community that needed it most. Switching it to The Center’s ride just made sense.

In 2012 when I did AIDS LifeCycle – each participant is required to raise $3000. This encourages people to host fundraisers within their communities and get involved. So, working at Therapy and working in events – MHK was born!

This is always a hotly contested and coveted crown. What do you think have been some of the unifying traits that all these past winners have had to get them the crown? Or in other words, what does it take to win Miss Hell’s Kitchen?

All of the contestants that decide to do MHK are doing it to represent a charity. That right there is what distinguishes MHK from most other titles. The queens that have won MHK all have really looked at each category, figured out where their own strengths lie within them, and execute it flawlessly. I do love that our pageant is not judged by nightlife members; it is people that represent our community. So, your slate is clean when you walk out on that stage.

Is it possible for you to recall a single most gag-worthy moment from pageants past?

I don’t know if there is just one! The ones that pop right to the front would be Bootsie’s gown the first year. When she walked onto the tiny stage at Therapy, people just gasped. It was absolutely stunning! Tina gagged everybody with a Presentation look that had to be Red or Represent HIV/AIDS prevention… and she came out in a full length dress made entirely out of condoms! She then proceeded to sing live for Talent–Jekyll and Hyde— in a split male/female costume. There are so many that I could go year by year, but that would be a book by the end!

What’s it like, generally speaking, producing this show,  compared to the other professional production stuff you do? Is it maddening and stressful, or a well oiled machine at this point?

Each year I compile a group of producers that volunteer their time and efforts to produce this amazing event. Throughout the years we have figured out what works and what doesn’t, but with any live event, you have to roll with it! MHK is such a passion project for me that it is unlike any event I have ever worked on. I just love that it is still happening with the support behind it. This year the amazing producers are Richard JMV, Peter Kontos, Tina Burner (MHK ’13), Logan Fletcher and Chad Sapp.

It’s a pretty amazing lineup of queens doing the pageant this year, some established and respected, and there are a few exciting newbies… and all so different! It seems like the pageant keeps getting bigger and more renown each year.

That’s the goal each year – to have the queens that are at the top of their game put on an amazing show where all the money raised goes to an important cause. If that keeps on happening each and every year, it will continue the upward trend it has been going in!
Saturday, May 4th at the Manhattan Movement & Arts Center… can’t wait! 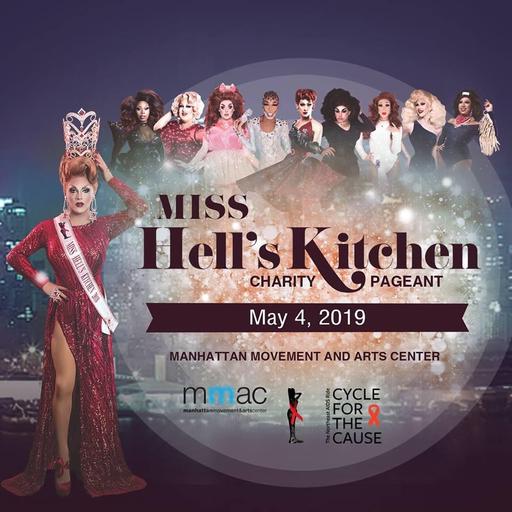 You all are doing such good work, congrats! Anything else that needs to be said?

The reason MHK exists is because there is a continued need for HIV/AIDS research and prevention. We, as a community, will continue to be there for one another and raise the funds needed to find a cure. I just want to thank everyone involved–from the contestants, judges, producers, and attendees. It is a fantastic show, and I am so excited to see what everyone brings on Saturday night!

Last question: what would your own drag name be… or have you dabbled already?

I have dabbled in drag (I can walk in heels like nobody’s business), but could never settle on a name. It is hard to come up with an original name, there are so many queens out there!