NYC Drag’s Brassy Broadway Baroness is finally coming back to us in May, after months of giving Mexico and Japan their lives. And in addition to returning to her usual fan favorite shows, she’s bringing something all new and hotly anticipated to the Laurie Beechman stage!

Thotyssey: Sutton, hello! So, OMG, you and Paige Turner are in Tokyo! Tell us everything about your adventures in the city, and why you’re there.

Sutton Lee Seymour: Kon’nichiwa, Jim! Greetings from literally the other side of the planet! Paige and I are here in Tokyo, taking a few days to enjoy the city after just completing a 10 day gay cruise with Atlantis Events. We started in Hong Kong and we ended in Tokyo, and its been exhilarating being on this side of the world.

How can I describe Tokyo? In a nutshell: everywhere in Tokyo is like Times Square, except the people are not annoying… so I love it. We ventured through a lot gay bars here, and I gotta tell you: most of the gay bars here are about the size of Posh, if not smaller.

We’ve eaten at so many different, amazing restaurants… but my favorite thing has been the Robot Restaurant. I don’t know how to describe this show, other than saying it’s a live action anime Gay Pride parade Power Ranger extravaganza. Google it. YouTube it. It was one of the most overwhelming experiences (in a good way) I have ever experienced!

Looks amazing! This Asian excursion is immediately following a long season at Puerto Vallarta in Mexico–a residency for you these past few years–where this time you’ve been staging your one-queen show, DRAGFLIX. How did it go?

I had a riot of a time down in PV this year! I truly love it down there; the community is tighter than a pair of spanks on a drag queen’s ass! And the show was really well received, so how could I not be happy?

It’s my take on current television shows like The Handmaid’s Tale and Game of Thrones,  while I also examine / destroy franchises like Harry Potter. And of course, there’s a hint of Disney. Basically, I’ve learned I’m really good at taking other people’s work and f*cking it up royally for everyone’s entertain[t]ment pleasure.

Indeed! Just curious, in regards to your ever-more-frequent globe-trotting: do you start every day asking “what time is it, and where am I?”

Jim, I start every day asking myself “Who am I, anyway? *Am* I my resume’?

Ha! Well, good news (for us, anyway): you’re gonna be back in NYC next week! We’ve missed you so! So, who / what do you think will be: the first person you see, the first food you eat, and the first show you see on or off Broadway?

The first person I will probably see is my Starbucks barista, Gabe. He’s my own “Taylor the Latte Boy.” I’m not sure what will be the first food I eat… eating real Mexican food has ruined Chipotle for me. Having actual Japanese food has ruined NYC-based sushi for me. So I’ll probably cry a lot and drink my own tears. The first Broadway show I will see will probably be Hadestown… if I can get tickets. Although I’m also very interested in seeing the new Oklahoma revival!

DRAGFLIX will come to the Laurie Beechman Theatre on May 3rd and 17th (Fridays at 10)! Tell us more about this show… how was it conceived, and what can we expect from this New York version?

DRAGFLIX was conceived because I started writing a parody about Game of Thrones,  and then the idea hit that I should create a show focusing on TV shows and movies and not just parodying Broadway shows. It’s still very much “in the world” of what my shows are like (a one woman farce), [but now I’m] destroying the TV shows and movies you may (or may not) love. It’s been a lot of fun! 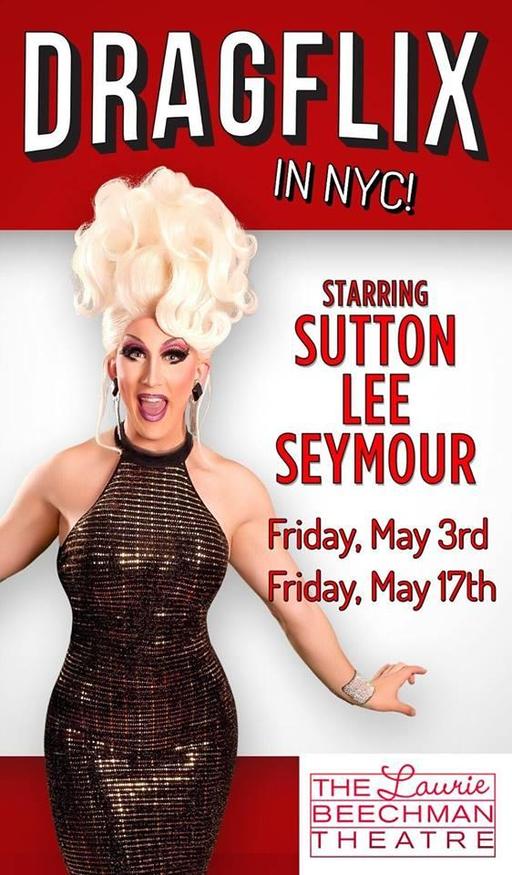 You’ll also return later this summer to the Beechman for Pride season, alongside Paige and Jackie Cox, in a revival of the superfun show you all did last year, You Don’t Own Me (Friday, June 28 and Sunday, Jun 30th at 7pm). We can’t wait to see you to turn it with those ladies again!

It’s always a blast with Jackie and Paige! Some have called us The Three Stooges of Drag. I’m not sure that’s a compliment, but I wouldn’t want to celebrate Pride any other way! 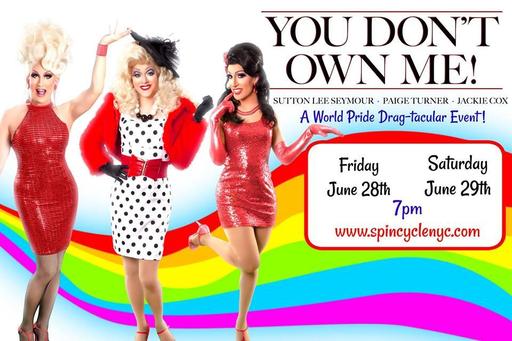 And I assume you’ll also be returning to your weekly shows, Broadway Mondays at Hardware and your solo Saturday show at the Albatross.

Yes and yes! I’m really proud of what those shows have become! Broadway Mondays is going to be turning five years old this year, can you believe it!? And now with Paige having joined the ranks with me and Cacophony Daniels, I think we have an incredible variety show!

And my Saturday night show at Albatross is very special to me! It’s always a party and a hoot, but it’s the community at Albatross that really makes me feel “there’s no place like home.”

In closing: what do you binge watch on Netflix, when you can?

Oh, I am a real basic bitch when it comes to Netflix. If you recommend it on social media,
chances are I’ll watch it. Most recently, I binged season 3 of The Santa Clarita Diet, and I’m still butt hurt they canceled it just this past week. I guess it’s a good thing I didn’t include it in DRAGFLIX. HA!