Also a brilliant, award-winning visual artist and animator, this fairly new drag performer has taken both Brooklyn and Manhattan by storm as a distinct character with a very specific (but still evolving) point of view. Thotyssey gets their Creep on with the delightfully perverse nebbish Sweaty Eddie!

Thotyssey: Eddie, hello! Thanks so much for talking to us! It’s always lame to start with the weather, but OMG THIS WEATHER, right?

Sweaty Eddie: Oh my goodness, I love it! Makes me just wanna walk around in my little shorts.

The world needs more of that! So, a few weeks ago you did Blvck Laé D’s drag competition at Dromedary. How was it?

So much fun! The Dromedary stage is great for crawling around on the booth benches. I love Lae, and her vision and intention behind the spaces she creates. It’s really special for a competition to feel grounded in love for all the performers.

There are now so many competitions for drag performers and nightlife entertainers in Brooklyn. That’s an exciting development, but also maybe it adds to the competitiveness of the scene?

I can certainly appreciate the excitement of a competition. It’s a great way to showcase all different kinds of drag in the same lineup. I wish there was a way to have that variety without pitting performers against each other. I don’t want to compare people’s art, I just want to be wowed!

The more platforms, the better! So where are you from originally, and how did your own specific art begin to develop?

I grew up outside of Boston near Salem, MA. I moved to NYC in 2008 when I got hired as a production assistant at Sesame Workshop. That same year I was cast as a Playboy bunny in a Fringe Festival play about Anna Nicole Smith. I did a few other plays, and made an animated short that screened in some film festivals. But for the most part I spent my time working in production, eventually as a game designer and children’s media producer.

In 2016 I was cast in a play as Baby Bib Man, my first male role, and I got a taste for playing a gross weirdo on stage. That fall, I won a Halloween competition at Giphy making animated horror GIFs. Within the next year I started working a freelance animator, left my production job, started doing drag, and came out as a trans man. Since then, I’ve been able to spend more time working on stop motion animation self-portraits and other visual effect GIF art.

Your GIF work is amazing!

How would you describe your aesthetic and inspiration in that field?

I’ve learned a lot from studying traditional animation, and I try to use the techniques of cartoon physics to create a surreal sense of logic in the physical world. I’m always looking to use digital tools to enhance a tactile environment. Jan Svankmajer and Bill Plympton are some of my biggest animation influences.

In general, I’m inspired by colors, textures, shifting states of matter, perception of time and space, anthropomorphic objects, organisms and systems on all scales (especially bugs and the human body). I don’t really have a tagline because I want my aesthetic to stay evolving. Something like if Pee Wee’s Playhouse were filmed in Buffalo Bill’s basement? I guess that’s more of a description of my apartment.

I live for that. I’ve heard rumors that you’re an Emmy winner!

I do have an Emmy! I won with a team of producers for a Daytime Emmy category called “New Approaches in Children’s Television,” aka best website accompanying a TV show. This was before iPads, but if you by chance logged on to PBSKids.org in 2009 to play flash games about math and reading . . .

As for Eddie himself, how did he evolve from that role in the play into the beloved nebbish who creeps through Brooklyn nightlife?

Baby Bib Man was more of an ambiguous possessed child, something like if Spagett was a little Pilgrim boy. Initially, my only goal with Sweaty Eddie was to be a terrifying presence. When I first started performing, I had long red hair and thought wrinkle lines were the best way to masculinize my face. I looked like a tiny Ron Jeremy with boobs. The dissonance of that image was funny and haunting enough on its own in the beginning, but as I’ve been medically transitioning and embodying masculinity more out of drag I became interested in coming at being a Drag King from different angles.

Sweaty Eddie’s current form is definitely more androgynous, and goofy at times. I dressed up as Humpty Dumpty to a Tiny Tim song, and have a few Klaus Nomi looks, but I also still subject everyone to five minutes of me humping the floor to one line from Smash Mouth’s “All-Star” on loop.

I’m sure you’re told this all the time, but Eddie really evokes a 90’s Steve Buscemi.

Thank you! That and Jerri Blank. My how-do-you-do-fellow-kids vibe.

I saw you in two unique drag stage productions… the first was the Icon Bar reading of Julie Mains‘ workshop musical Mother! You were playing kind of a wormy guy there–perfect for Eddie–and you had this intentionally flat and quiet delivery that was hilarious. Is that basically how Eddie is all the time?

I think that was Eddie’s first speaking role! I was trying to bring my best Vincent Price voice. He’s more of a silent film actor most of the time.

I next saw Eddie at Lips with a large cast of queens and kings in a Heidi Haux production, lip syncing a smattering of pop numbers spliced into two hours of dialog from Scream Queens! That was epic. Eddie played a stud, but was still very Eddie.

That Backstreet Boys dance number nearly did me in!

I wonder, what do you think a weekly Sweaty Eddie show would be like?

My partner and fellow drag king Richard Dicocko and I have been talking about planning a show integrating video with live performance. I’d love to create some sort of perverse and disorienting dinner theater experience.

I would love to see that. In the meantime: congratulations on your BNA nominations! Eddie is up for Best King, and as Lee / Erma Friend your artwork is nominated as well! Are you excited for the big night? OMG what are you gonna wear???

AHHHHH!! I’m wicked excited. I recently did special effects for a horror movie, and now that I have a mannequin head and buckets of liquid latex lying around, I have really ambitious plans to make a little suit out of faces. We’ll see if I can make that happen. Otherwise, I’ll slap together a funny little Eddie/  Erma getup. Or maybe I’ll bring back the Egg Man. We’ll see how I’m feeling an hour before I have to leave the house! 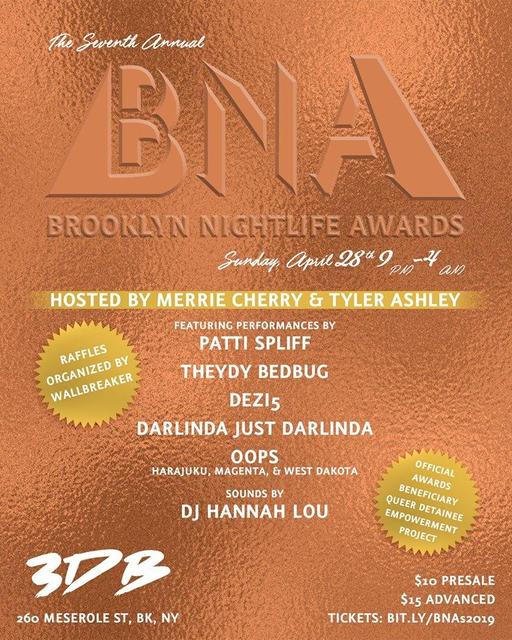 And I see you’ll be with Emi Grate for her panel show “Last Month Tonight” at The Rosemont on Tuesday. Do you stay in the Eddie character, or will you be You? Or both?

Oh you know me, I’m always jumping through an Eddie-shaped hole in the fourth wall. 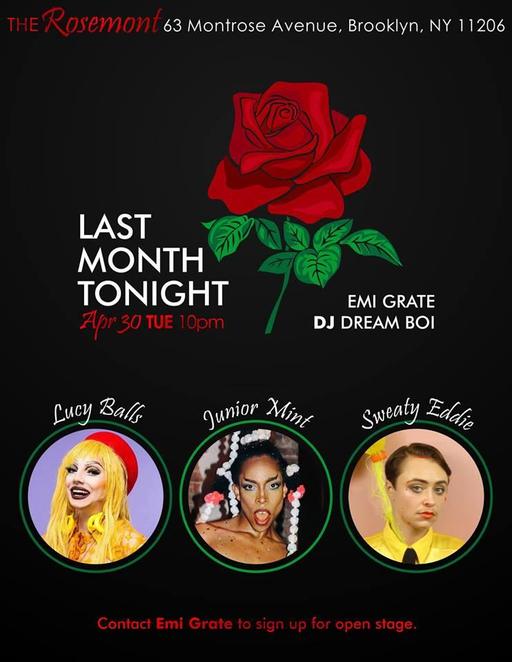 Lately, I’ve been busy with animation jobs… but I’m hoping to get back to making some freaky art soon! I’ll be selling some Erma art / Pride stuff at the Queens Craft Brigade on June 9th. Come by! I’ll give you sticker sheet of chicken nuggets wearing heels.

Theydy is such a treasure. Clearly so gracious and talented, but also a fearless trailblazer for so many people. To be unwavering in claiming space to exist while being so loving is hard to do, and I really admire them for it. I spent years trying to figure out who I was and where I fit in gay spaces, and it wasn’t until seeing other transmasc femmes–for lack of a better phrase–having such pride and intentional presence that I was able to feel valid myself. So I really owe a lot of my drag and courage to transition to the effects that Theydy’s had in nightlife. Warms my little bug heart!