A longtime resident beatmaster of both super-successful partymakers Hot Rabbit and the newer, all-inclusive brand XOXA, DJ Kandylion gives Thotyssey an origin story, an account of today’s nightlife scene and a taste of things to come.

Thotyssey: Kandylion, hello! Thanks for chatting today! So, recently you were spinning an Earth Day party at Jupiter Disco… how did it go?

DJ Kandylion: Hello! Yes! I organized the “Terra Disco” party and also had Colby B spinning with me. A portion of proceeds for the night are being tallied and will be donated to the LES Ecology Center, a local nonprofit doing a lot of important work to support sustainability via composting and electronic waste recycling.

I always have fun playing at Jupiter Disco. The venue has a great sound system, and attracts a very musically open-minded crowd (they also make an excellent Moscow mule!) It was a really good feeling to be able to both play music that I love, and also hopefully make a small difference for the future of our city and planet alongside that.

In general, do you prefer an intimate, smaller dance floor or a giant raging space?Not that there are many of those larger places left in New York.

Yeah,  in general there aren’t many giant spaces available for clubs in New York anymore, and even less opportunity for queer people to experience a big club space that isn’t catering first to rich, straight patrons. That said, I’ve really enjoyed the chances I’ve had to play in bigger spaces. 3 Dollar Bill is an amazing queer venue, and I’ve loved getting to control the massive sound system there. I’ve also DJed some big theme camps at Burning Man, which was an other-worldly experience.

Aside from that, though, the most joy I get out of DJing is when I’m able to facilitate personal connections among the people dancing. I love to notice couples getting together for maybe the first time on a dance floor, or a group of friends letting loose and sharing the moment together without reservations, and you really only get to witness that when you have a more intimate setting.

So where are you from, and what was the earliest music that inspired you?

I’m originally from a tiny rural town called Penn Yan in the Finger Lakes of New York state. I grew up surrounded by farmland, and it was common to see Mennonites (similar to the Amish) driving down the street in a horse drawn buggy.

I wasn’t really exposed to a lot of music in my early life, but I discovered an affinity for it in my teenage years through my school’s choir and musical theater programs. I think I gravitated toward those groups because they were the only spaces I saw where it was okay it be a creative weirdo in an otherwise conservative environment.

I also remember being irresistibly drawn to electronic music and dance beats from a young age – I made a bootleg cassette tape of Eiffel 65 tracks when I was probably 10 years old, and would scour Limewire for electronic music like Alice Deejay, BT, 4 Strings, “Castles in the Sky…” I was way into Eurotrance before I had any conception of what clubbing or DJing was like. I would name Imogen Heap–particularly her work with Frou Frou–as my early inspiration for pursuing electronic music over more traditional forms like choral music or musical theater.

After high school I attended the Berklee College of Music in Boston. I also lived across the street from Machine, a gay club that hosted a variety of electronic music nights. I mainly started going just because it was a queer space, but I also ended up attending some really cool house and bass music events. I got really hooked on the whole experience, and knew that I had to learn how to DJ. Berklee actually offered a formal class on turntable technique taught by Radar Ellis, and I learned the basics of spinning vinyl that way. I bought a cheapo little Numark controller and started playing at house parties.

I moved to Brooklyn in 2013 after I graduated, and started getting gigs in actual venues around the city. I spent a lot of time attending queer nightlife events and observing different DJs and meeting event organizers, like Amber Valentine and Emily Hall Maresca of Hot Rabbit. I have a lot of gratitude for both of them for doing what they do to create a nightlife scene that embraces queer women, and for giving me some of my first opportunities to DJ in that scene.

You continue to DJ for the Hot Rabbit parties in Drom and Lot 45 Bushwick. Do you know when you’ll be with them next?

I don’t have any upcoming dates with Hot Rabbit currently; I last played at Drom at the beginning of the month for their party to benefit The Trevor Project. Everyone working that night donated their services and 100% of proceeds went directly to the organization.

This year the city lost Bum Bum Bar in Queens,bringing our grand total of lesbian bars in the city to two. That pattern seems universal at this point. Will we ever see a resurgence of the lesbian bar, or do these monthly parties just better reflect the nightlife habits of queer women?

In my opinion, there are two main reasons why we keep losing lesbian bars. One is that queer people have been rapidly assimilating into the mainstream over the past decade, and we don’t have such a strong need as we once did for insular spaces in order to be safe when we socialize. This is great for queer people, but not for queer venues that depend on a niche customer base.

The other reason is economic. Women (and trans / gnc people) as a demographic have less disposable income compared to men due to a variety of gendered factors, and so generally less money is spent in a venue that primarily caters to women. As long as that inequity remains, it will always be more of a financial challenge to run a lesbian bar versus a gay bar.

Given these factors, yes… traveling parties are going to be the foreseeable future of nightlife for queer women. Which is a shame, because the change is still a loss to the community. JD Samson has a piece with Vice on lesbian bars from a few years ago that really delves into this.

I would love to see a resurgence of lesbian-centered spaces, but if that does happen I imagine it will probably look a little different than it has. Maybe they will be more like coffee shops, or focused more on other commonalities than sexuality. For example, I go to Hairrari barbershop which didn’t start out with the intention of being a queer business, but the owner and barbers organically created a culture that includes so many visible queer women/ trans/ non-binary people that now there is a great little community associated with the shops that hangs out together and goes to each other’s birthday parties. So I think that’s also part of the future.

That would be something good at least! In the meantime, besides Hot Rabbit you often DJ for the collective XOXA. which is about to have its second year as a traveling safe space for all people, and is especially a haven for queer femmes. What can you tell me about them, and how you hooked up with them?

I was recently added to the official resident DJ roster for XOXA. I got linked up with the organizer Kira Ibañez through my DJ friend Panooc (Leah Gough-Cooper) around the time XOXA started up the Femme Turf parties at The Deep End. It was a really cool weekly series that featured a different lineup of women, queer and nonbinary DJs (so, no straight male DJs were booked.) There were a huge number and variety of DJs and musical styles that got involved over the run of the weekly party.  I met Colby B, Mira Fahrenheit, and many other talented DJs through DJing and attending Femme Turf.

I absolutely agree that there is an emphasis on embracing queer femmes at XOXA events, and the lineups and performers reflect this. There’s also a big effort to include interactive elements at their parties, which I love. It means you can attend even if you don’t really know anyone, or if you’re sober then there’s fun stuff to do beyond just drinking and trying to hook up. In a lot of ways, it’s like a music festival experience.

We will be celebrating the second anniversary this Saturday, April 27th at The Keep! There’s going to be all kinds of fun stuff: 4 DJs, special performances, gogo dancers, tarot readings, and a birthday cake. I’m especially excited about collaborating with Panooc during my set; they’re a brilliant saxophonist, and will be playing live while I DJ — which I’ve never had the chance to do before. My dear friend and roommate will also be performing as Synthetica, a cyborg sent from the future to dismantle the patriarchy, and I’m really looking forward to seeing what they’ve put together. 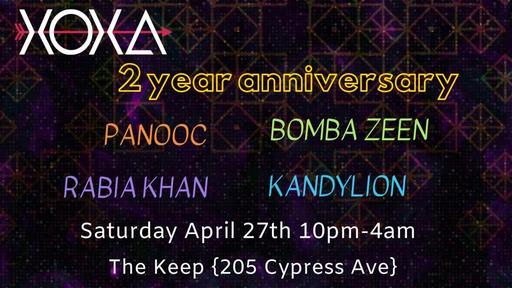 Sounds extraordinary! Then afterwards you will be with XOXA for two more events:  Thursday, May 9th at Happyfun Hideaway, and later on Wednesday, May 15 at The Bad Old Days.

Both those upcoming dates are going to be laid back bar hangs, definitely recommended if you’re someone who maybe doesn’t like clubbing but would still like to hear music and hang out in a cute, queer space. Happyfun is one of my favorite bars, and there will be a cool mix of musical styles including hip hop and house music. 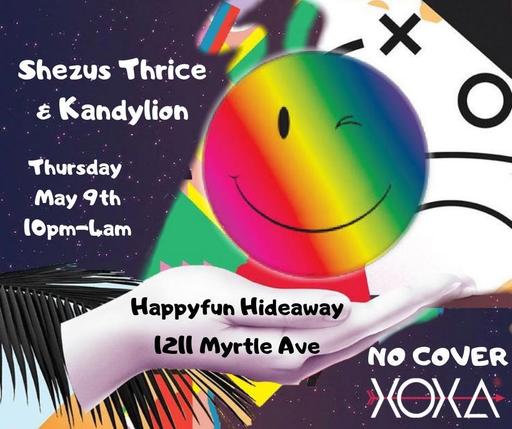 At The Bad Old Days, I’ll be joining forces again with Panooc–we’ve recently started DJing as a duo under the moniker Fxsimile (pronounced “facsimile,” a little joke based on how often people have confused us for each other.) The bar is really cute, and has board games! 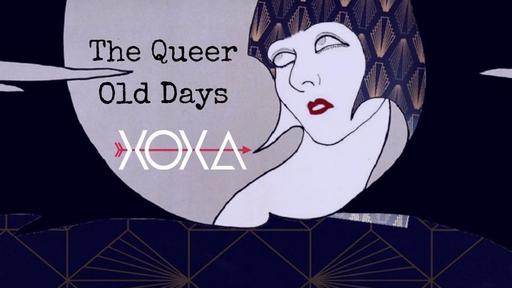 I have a guest mix and short interview coming out next week on Midnight Snack, a showcase by DJ/producer and Femme Turf alum AKKI. I’ll also be a guest DJ on the Buttered Tapes internet radio show via Newtown Radio on May 29.

June, of course, is Pride Month, and I can’t wait for all the craziness of World Pride! I’m very excited to be playing my first party with Whitney Day for Brooklyn Pride on June 7th at 3 Dollar Bill, also with local DJ / producer QRTR. 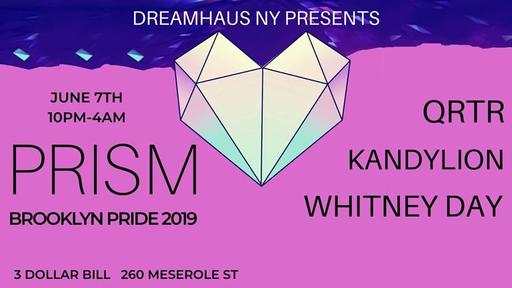 There’s also a XOXA event in the works for Brooklyn Pride, so be on the lookout for that. I’m still open for bookings for NYC Pride, so promoters are welcome to get in touch!

I hadn’t heard it, so had to look it up and listen! I love classic Madonna and I love tropical Latin beats. However, something about the combo of her vocals with Maluma’s verses doesn’t really gel for me. I give it a pass.