For decades, NYC counterculture has traditionally made superstars out of performers like Kentucky-born Kay Day. The template is there: sexy yet-silly screaming punk princess, willfully goofy provocateur, filmmaker on the rise, and just all around fun as fuck. And while it’s true that most of today’s gay-bies only acknowledge drag queens as recognizable nightlifers… well, she’s got that covered, too. Thotyssey goes in on when this Day began, and where it will lead us.

Thotyssey: Kay Day! Thank you for talking to us on this gorgeous day… how are you?

You betta werk! OMG, did you see the double save on Drag Race last night?

OMG I was fucking gagged. I love both of them. I got to hang out with Miss Yvie Oddly a couple weeks ago at the premiere party, and she is sickening. But I’m always rooting for my girl Shuga Cain. I felt like she should’ve won that challenge!

It was great to see her really come through this week! So, I didn’t know until recently that along with all the other stuff you do on and offstage, you’re a drag queen yourself!

Woof. It has been a journey, for sure. I started out because of [Look Queen host and Drag Race contestant Dusty Ray Bottoms]. My first number was a parody of a song he sings, roasting him. But I did really well, so I kept going… and I became Botch Bottoms. I ended up winning a Look Queen preliminary by being bald Britney Spears.

What’s the biggest thing you’ve learned about the art of drag since you started?

It takes so much work to do drag. I didn’t realize how hard makeup is. I got performances down, but damn… makeup is hard!. Being the only AFAB queen in the Look Queen finale was an honor, and I learned a lot about myself doing it.

Where are you from originally, and were you always musical / theatrical?

Yes, botch! I’m actually from Louisville, KY. When I was little I was Little Orphan Annie, and I was brought up in musical theater. Me and Dusty actually went to high school together, and did musicals together. But I always knew I was different from people in my town. I was always pranking people, and doing performance art.

I knew I had to move to NYC. I started out doing acting and comedy, then realized… “oh, I’m a fucking punk and have a raspy voice… should probably get into that.’

Did any particular punk band or artist influence you?

Oh hell yeah: Iggy Pop, for sure. He performs fucking wild, whipping his head or dick around everywhere. I also am very influenced by the Bloodhound Gang, Taking Back Sunday, Brand New. Any one who doesn’t give a fuck about what they look like on stage. Like, I’ll put a cake in my pussy if I feel like it! Oh and of course, my main influence is my god Britney Spears.

I thought you were gonna say Avril Lavigne. Just kidding!

Avril Lavigne married the fucking Nickelback singer, so she’s dead to me.

You’ve recorded some tracks now, too. Are you more of a studio chick or a stage queen?

Ohhhh, I’m a way better performer then I am singer, lol! Being in the studio gets frustrating to me. I used to always have a beer in there with me. But I’m sober now, so I hate recording!

Have you had a craziest onstage moment?

Well, it’s a tie with my punk singing: the first time I put cake all over my body, or when I cut off all my hair at Bowery Ballroom on stage. Every one was gagged. I also was like, “fuck, I need extensions ASAP!” But anything to get a reaction, I guess.

Yazzzz! I know you and two other Punky Folks, Breedlove and Chew Fu, are regular presences at Arlene Grocery… how did you meet up with this pair?

OMG, well, it’s actually a crazy story! Me and Breedlove met, like, six years ago because we were dating the same guy! And we decided to become friends. He is a huge influence on me, and I wouldn’t be sober if it wasn’t for him! Him and Chew Fu had a show called Tragic Tuesdays with a band called Chico and Lollipop, and asked me to guest it. Chico quit the band because he sucks, so it became Kay Day and Friends! And I opened up for Breedlove and Chew Fu for a year at Arlene. It’s the craziest, most fun show you’ll ever see!

It kinda sucks with queer culture in this city these days — the kids are not going out to see bands and live music acts. I guess they think that’s, like, a straight thing, but that’s certainly not how it was historically. Iggy Pop couldn’t be pleased with this development.

Totally! That’s why in my show, Kay Day and Friends, I try to always include LGTBQ acts. This Sunday Jayse Vegas is opening for me, and Fool’isha my drag sister is doing some numbers during my set. I wish more people would come out of that community and know that the punk crowd lovesss every one and everyone is welcome!

Totally! It’s been great watching Dusty emerge and grow as an artist since Drag Race. Did you want to throw something at the TV, though, when Michelle made her infamous dots critique?

Yeah, I was pissed. Dusty is definitely a theatrical, crazy botch, and his time was definitely cut short. I’ve been best friends with him for 20 years, so no matter what, I was just so fucking proud that a kid from Kentucky has come this far. He’s the Seymour to my Audrey in Little Shop of Horrors, lol! And I always say he got the dots from sucking dick, but whatever, lol!

Ha! Well, it was brave of Dusty to discuss the conversion therapy experience back when she was a kid in Louisville… were you aware that stuff like that was going on back home?

I wasn’t aware of the specifics back then — I was more worried about smoking weed to get away from the conservatives in our town. It’s terrible what he went through, but it’s also amazing how far he’s come from it. He’s been through so much, and honestly deserves the best life possible.

I watched the Butt Grabber video you directed starring Dragula’s Monikkie Shame and some local nightlife stars… short but super cute and funny!

Monikkie is legit like my soulmate, I think! We are like the punk Paris and Nicole Richie.

How long have you been making stuff like that, and where do you think directing will ultimately take you?

Directing is my new found passion. I go to school at the New School of New York for film production. I’ve been filming people’s music videos, skits, and of course drag queens.
But I’m making a short film starring Sherry Pie and Dusty called Trainwrecks. It’s a dark comedy, and shows another side of a gay guys. I feel like in most movies, it shows gay guys as always flamboyant. In my film, Sherry plays this guy who’s having the worst day of his life, but it’s really funny and harsh. Definitely something to look out for. Sherry Pie is also fucking amazing, and one of the funniest performers in NYC.

We are already living and dying for this! And I understand that you are also putting out a new song with Dusty?

Yes… not sure when it will be released, but we already recorded it! It’s called “Watch Out!” and it’s produced by the darlin’ Chew Fu!

Tell us more about Sunday’s show at Arlene with your band, plus Jayse and Fool’isha: “Return of the Botch!” And it’s on Easter Sunday? OMG so extra, I love it!

Ha! Yeah, me and Jesus used to bang, so I thought I’d do a show on Easter… just kidding! But yeah, it’s gonna be a pop punk variety show! There’s even gonna be an Easter egg hunt. There might be candy in the eggs… broken cigarettes… a coupon for a free massage from DJ Karen! I’m going to sing two new original songs, as well as from my last album! Should be dope. 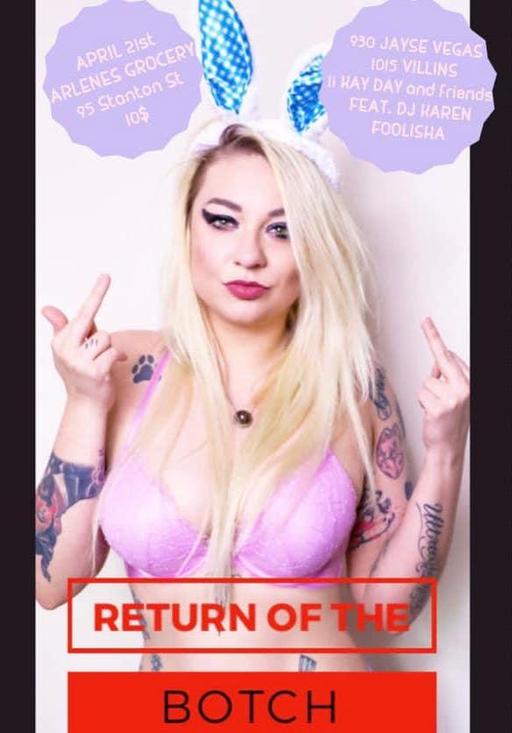 Just, if you need a kick ass director or just need a botchy performer, hit me up! I’m always trying to collaborate with new artists!

Heard! So in closing: when you finally pass away at age 197, what song will you request to be played at your funeral?

“Me Against the Music,” by Botchney Spears. And my tombstone needs to say “Here lies Botch.” Oh, and while every one is walking out of the funeral, play the “Sun Will Come Out Tomorrow…”

Best funeral ever! Thank you, Kay!