This hairy-chested harlot with a gonzo approach to drag began as a queen at, of all places, the showtunes-friendly West End Lounge. Now returning to that venue for an All-Star edition of the pageant she debuted in, Michele Shocked talks to us about her unique style, surviving Christian school gym class, her web series and showcases in the works, her “Drag Race” Season 11 Faves, and that evil maybe-lesbian she’s definitely NOT named after.

Thotyssey: Michele, hello! Thanks for being here!

Michele Shocked: Hi, I’m so excited to be, thanks for having me!

I see you recently did shows with Cherry Poppins at The Vault in Brooklyn… how did that go?

Those shows were so fun! Cherry is a new friend of mine, and I was delighted she had me along. The Vault and their staff were so cool too; the performance space is covered in mirrors, and you know a drag queen famously can’t resist a mirror. I’m moving to Brooklyn soon, and that definitely got me excited to explore the scene!

Maybe you’ll wind up as a Brooklyn queen! Do you see yourself being more likely to perform in one neighborhood or scene over another?

I’ll perform anywhere that will have me, because I love an audience (in a very sweet and non-desperate way, though). The thing I love about New York drag is how diverse and textured it allows itself to be, so I’ll probably keep dipping my foot in every pond. I will say that a lot of what I like to do has wild performance art aspirations, so I’m excited to let that side of myself loose in Brooklyn!

Well, I’ve been known to cover myself in ketchup and mustard, for starters. Michele’s philosophy is that she’s trying to shatter everyone’s illusions; she wants to leave the audience shook through any means necessary. That comes along with a lot of celebration, camp, and humor — but my performance energy is altogether pretty intense. It’s a weird mix, because I’m very irreverent but also thematically influenced by a lot sociology and psychology. Nothing is off limits: childhood trauma, the untethering of our “reality,”overthrowing the oligarchy… she’ll want to dance about all of it.

I see that even as part of your most high femme looks, you keep you chest hair on  full display.

For me, drag is all about dissolving the constructed boundaries that rule our lives (like the gender binary) by showing them to be just that: a construction. So even at Michele’s most ‘feminine’ presentation, I like hinting at her seams (shattering the illusion) to highlight the constructed nature of all our identities — especially in the age of social media. Also… she’s so uninhibited, I just know she would grow chest hair if she were a mere mortal.

You must’ve had an interesting childhood!

Hahaha! Truly. I grew up in Southern California, about an hour north of LA. I am very lucky to have two extremely supportive parents, always eager to understand me. My mom praised my runway walk and my draped sheet dresses from a young age, and to this day begs for videos of every performance. But I was a pretty sensitive and obnoxious kid, so 7 years of private Christian school was a great education… and pretty harrowing, socially. It was the classic “picked last in gym / crying in the bathroom at lunch” story. But then as cliche as it is, I found theater, and things started making more sense.

Happy ending, at least! Are we talking about musical theater, or drama, or all of the above?

I auditioned for a community theater production of The Velveteen Rabbit in 7th grade because I had a crush on a girl who was auditioning. She ended up rejecting me (maybe she knew something I didn’t), but I was cast as the little boy who almost dies of scarlet fever… which, to this day makes sense to me. After that, I became a huge musical theater nerd (still am). In college, I enrolled in an experimental theater program. So it’s a mixed bag, and I love it all. Like most drag queens, I live for drama.

By the way: not sure you could possibly know this, but in the mid-to-late 90s during the whole Lilith Fair scene, there was a semi-almost-famous folk singer who called herself Michelle Shocked. We all just assumed she was a lesbian, but she recently revealed herself to be a homophobic, Right Wing lunatic!

I discovered that promptly after my best friend from home, Emma, and I happened upon the name to use for my drag character. That’s why I try to spell the first name with one “L.” I like to say the second one walked out on me. But honestly, because it seems like Michelle really exploited the queer community and turned her back on the people that made her, it would be my honor to one day eclipse her as a Google search result. Fingers crossed.

It will be done!

So how exactly did you get into drag, anyway?

I started out stealing my roommates’ makeup my second year at college (thanks Laurel and Brianne!) to experiment because of the drag queens I saw around the city and on Drag Race really inspired me. I’d say Michele as she exists today got her start as a part of the Ultimate Drag Pageant at the West End hosted by Marti Gould Cummings. I’m so thankful for that experience. I owe any presence I have in the community to the encouragement, support, and advice I got there. That experience also gifted me with my sisters Audrey Phoenix, Pussy Willow, and Sterling, who are all godsends.

Did you feel pressure to win that season of UDP (Lemon ultimately took the crown that time), or were you just enjoying the experience?

I felt pressure from myself to do the best that I thought I could do every week, because I have the tendency to be really anxious and self-scrutinizing. But honestly, because I was so new to the scene and didn’t know what to expect, I was very surprised at how well I ended up doing. Any competition is going to come along with a lot of stress, but it was overall such a blast. I had always felt too intimidated to put myself out there, but joyfully discovered just how supportive and loving this community can be. Marti and the guest judges were very encouraging, and it was a really great foray into pursuing drag more seriously. Our season had such talented girls, so it was a delight to be first runner up to that “Lime Girl!”

And you were such a pageant favorite that you have been asked to come back for the latest All-Star season (along with Cherry and Pussy), which premieres at the West End this Thursday!

What are your expectations of how this will be different from your initial season?

First, I fully expect my good sis Pussy Willow to sabotage me at any and every turn, ’cause she’s playing to win. I felt like the first time, I was really working to hone and pin down my perspective as a drag artist. Now, I’m ready to use the confidence and assuredness I found through that go-around to put my worries aside, and unabashedly be myself. I want to go wild, and ideally impress the audience and judges in the process. But ultimately to stay sane, I’m looking at it as an opportunity to continue to polish my aesthetic and push my own boundaries as a performer. I’m really looking forward to it. 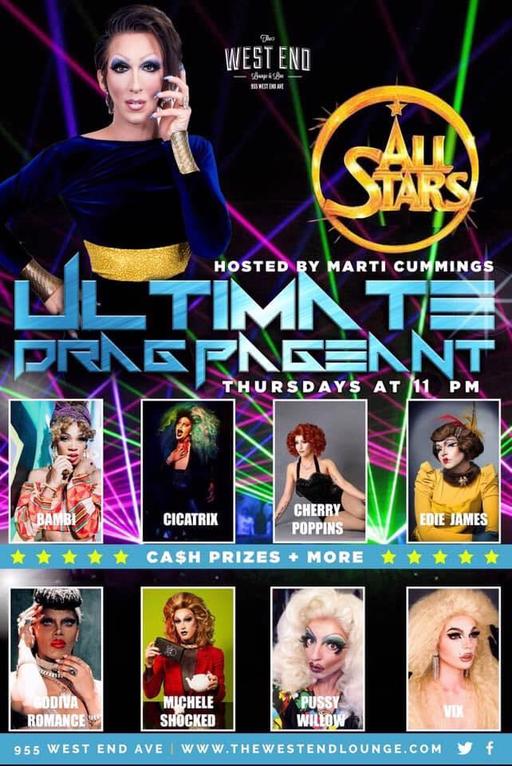 Amazing, good luck! And in the meantime, I understand you are part of the cast of Real Drag Moms of New York, a comedy web series in development, with also includes Pussy, Audrey and Lemon along with Xunami Muse and Vix! How did you get on board with that, and how is this show gonna turn out?

I was asked to be a part of it by my UDP sister and co-show runner Sterling, who is creating the show alongside their partner Aaron Cooper. I think it is going to be fabulous! In writing the series, Aaron and Sterling really kept each of our individual perspectives in mind — which is great, because the cast is so unique and hilarious. For instance, Michele’s storyline revolves around her quest to have the Devil’s baby. Truly a tale as old as time. They are taking their time to make sure the product is something special, so I can’t wait to continue working on it. Keep on the look out!

Very exciting! Now for a quick review of the last Drag Race episode: I’m ridiculously biased towards Yvie at this point and was bummed she didn’t win the organic material runway challenge over Plastique. But I might be in the minority there. You’re thoughts?

This season I’m also really rooting for Yvie; I’m glad to see the judges are so taken with her unique perspective in a season full of pretty typical (but mostly well done!) drag. Seeing her push through her injury is also really inspiring; she doesn’t seem like the type to back down. The Untucked REALLY highlighted that, and as I mentioned, I live for drama. So thus, I got my life. That being said, I would have given the win this episode to Brooke Lynn because even though I think Yvie’s concept was stronger, the way Brooklyn cut that outfit was too cool. THAT being said: Yvie for the crown! She’s already my queen.

Hear hear! And now, what else is on the horizon for you?

She’s hoping to come out with her EP–featuring such hot tracks as “Fuck Me (Then Fuck Me Over)”–and to put up her show I Am My Own Midwife: A One Woman Live-Birth  sometime over the summer. Follow me on Instagram for updates, and slip into the DMs if you think you have what it takes to be Michele’s 34th husband.

These titles are everything! Okay, final question: what is the most vital trivia fact that the world needs to know about Michele Shocked?

She is, above all else, a single mom.