From “Broadway Bares” to a brand new self-produced revue, this sexy star of theater and burlesque has become a recognizable talent and a force to be reckoned with over the course of a decade. Get on point and on board with Aaron Libby, aka Milo Pony!

Thotyssey: Hi, Milo! It must be a busy time for you as your big premiere looms closer… how are you holding up?

Milo Pony: I’m excited and anxious all at the same time. It’s a thrill to be creating and building a show, but it’s also a daunting task. My mind runs away from me with possibilities.

Is this your first time creating a showcase like this?

Yes. I’ve worked on and with new theater pieces, but I’ve always been within a production. I’ve never been one of the actual producers.

Exciting! You must be learning a lot on the job, even with all your experience as a performer.

No matter how seasoned you are, there is always something new to learn. Sometimes I forget that I enjoy that part of the process.

I’m gonna ask more about this show in a bit, but first some background. Where’s your hometown, and how did you begin as a performer?

I grew up in Cheshire, CT. It’s just north of New Haven. Growing up, I was somewhat athletic and enjoyed singing. As I grew more and more confident, I started doing town theater, singing in school, auditioning, doing state competitions, summer programs, etc.
I got a BFA in Musical Theater from Syracuse University, and there ya go!

What sort of roles did you get to play on stage that you’re the most proud of, or have the best memories of?

I had the pleasure of playing John in John & Jen, which is a beautiful show I could do over and over again. Also, a few years I got cast as Homer in The Human Comedy by Galt McDermott (HAIR). He saw the show, and during a talk back told me how much he enjoyed me. He recently passed, but that was an extremely special moment that I will never forget.

How did burlesque come into the picture?

I started dancing in Broadway Bares in 2009. That, combined with my love of old school Broadway and Vaudeville, definitely sparked it.

What does burlesque do for you that other types of theater can’t?

I think it offers a level of undefined creativity and freedom. It’s kind of like drag. You can really make it your own.

Is Milo Pony a character per se, or is he you?

Did you have to overcome any inhibitions about being so bare in public?

Yes and no. Broadway Bares got that initial shock of being exposed in public out of my system, but it’s a little different when you are performing solo in a more intimate environment. That took some getting used to.

How do you usually build your burlesque numbers? Do they center around a concept, a specific song, a look…?

I take my inspiration from anywhere I can get it…a song, a movie scene, a funny quote, a meme. Anything that sparks an idea can turn into a number. Sometimes it’s a winner, sometimes it’s not!

I’m always impressed with how strong and supportive a community the burlesque world can be.

Yes! I love my burlesque family. It spans from NYC to all over the world. Thanks to social media, it’s easier to find a wider network of performers. The amount of talent out there keeps me on my toes.

Let’s talk about Members Only Boylesque, a revue you are just now starting up with fellow burlesquer Twinky Boots, who will make their performing debut at the Laurie Beechman Theatre this Friday at 10! How did this collaboration come about?

Twinky Boots and I have known each other through the theater world since well before Twinky Boots or Milo Pony were conceived. We have both performed in Broadway Bares multiple times, and were performers with Bad Apple Boylesque. He and I think on a similar wavelength, but have different strengths that compliment each other. As our friendship grew, a collaboration just seemed like the natural course of action. Our goal with “Members Only” is to create a fun and sexy male revue that pushes us as producers and artists, and allows our performers a platform to create their own unique content. We are hoping to eventually produce a multitude of performance opportunities and shows for all kinds of performers and audiences.

The lovely and hilarious Jackie Cox is hosting the first night. What else can we expect from the premiere?

Prepare yourself for a night full of boys, bulges, booty, sparkle, silliness, and skin. 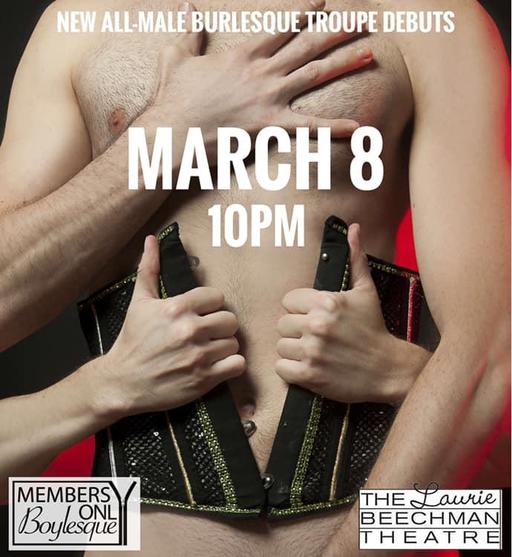 Okay, anything else that needs to be mentioned?

Members Only Boylesque presents: “Only Members” will be at The Laurie Beechman Theater with a new show and host every month. It’s a rotating cast, so there will always be fun surprises.

Okay, in closing… have you ever had an embarrassing wardrobe malfunction onstage?

Hahahaha, I actually got tangled in a jockstrap once. It wouldn’t tearaway, so I had to just take it off like normal. What was supposed to be a sexy moment ended up getting a few laughs, but that’s live theater!

Indeed! Thanks Milo, and have a great premiere!

One thought on “On Point With: Milo Pony”