This New York nightlife legend, actress, queer/trans activist and club music diva has seen it all, and she is still here giving us our whole life. Just in time for World Pride, Thotyssey finally gets a chance to really know the storied stunner Dina Delicious (aka Dinah Marie, aka the gal who handed us our very first GLAM Award)!

Thotyssey: Dinah, hello! Thanks so much for talking to us today! So, how is your World Pride Month treating you so far?

Dina Delicious: Hey, hun! World Pride is treating me well! We’ll be announcing today where I will be performing and hosting, and it will be a departure from my usual Prides of the past five years. I’m very excited!

You have a long history with Pride.

I have worked so closely with NYC Pride for five years, from Pridefest, to headlining the rally and performing on the Emmy-nominated first telecast [of the Pride march, in 2017] on ABC… something I will forever be grateful for.

I remember what a nice surprise it was then, to see you on TV giving commentary with the newscaster! And you did a number that day, I think on the Pridefest stage, that aired as well.

I performed [my original song] “Reverse the Beat!“

You’ve been a legendary performer in this city for many years. And you are, in fact, a native New Yorker, right?

No more bridge-and-tunneling for you!

Yes, but I will always be a Brooklyn girl! It taught me so much, and gave me a lot of strength.

Brooklyn is good that way! Growing up, did you have to deal with kids teasing you for being different?

I was bullied. I had my two front teeth knocked out one summer at our block party, which made the teasing worse. I was artistic, and I grew up in a very macho atmosphere. I loved Bernadette Peters and showtunes, and I didn’t hide it. I actually transitioned in Bensonhurst. I never wanted to feel like I had to go, or was a victim of circumstances. I could be very stubborn.

I bet you inspired a lot of people to live their own truths in your hometown.

I believe I did. I still keep in touch with people from my old neighborhood. I think my biggest impact was that I started a conversation about being trans in a community that was very, very far from touching on it. Plus, my mother was well-liked and respected, so it had to be addressed. Also, I wasn’t leaving!

So, you were saying that you studied music and theater at the Performing Arts High School.

Yes, I have studied my whole life… even today. I was a child actor. My time at Performing Arts was pure magic. I will be on Broadway soon!

Did you pursue acting afterwards?

When I left high school, I went on to study with the legendary Uta Hagen herself as I began my transition. At that time, I was so torn and depressed. I had to give up all I knew–all I ever wanted to be–in alignment with my true self as a transgender woman. And there was no space for me in any form of media. So after I completed my two years with Uta, I fast-tracked my transition. It was bittersweet.

Is that around the time you discovered nightlife?

Yes. I had to create… somehow, some way. So I became my art, in a physical way… and nightlife was my stage.

How would you describe what was going in nightlife at the time you showed up? Were the big clubs like the Limelight still in full swing, or was that already going away?

I caught the very, very end of that. I did visit [those big clubs] in high school. Everyone got in… who needed ID? I really got my first NYC breaks with Michael T and Mistress Formika. Also, in Brooklyn there was a club called Spectrum in Bay Ridge that I did drag shows at through high school. I still talk with the owner, who is now a dear friend. It was a club that was mixed gays and lesbians, very different than what was going on in NYC. I actually did the first Brooklyn Pride!

Back then, the lines were probably a lot more blurred between a trans performer and a full-on drag queen.

Yes. Actually, at that time there were more trans woman performing than what are now considered “drag queens.” Most of the entertainers were trans, with some exceptions, or were transitioning at the time and have since stopped [performing].

In your performances in those venues, were you live singing your original songs or were you lip synching?

Both, but more lip synching the songs at that time.

I listen to your dance tracks now like “Reverse the Beat” and “Tick Tick Tick” and your cover of “Two of Hearts,” and I miss the days when you would go to a bar and hear songs / see videos like that: club music from local queer artists. Doesn’t it suck that we don’t see so much of that anymore?

It sure does! I could go on and on about this. I look at Ari Gold, a very talented queer artist who has not gotten the recognition he deserves.

Taking on these [music production] projects… it’s very costly to get the quality to measure up to “radio ready,” an industry term basically meaning that the sound technically is right and can stand next to a current artist. I write my songs. I’m extremely active in the production of every single thing I [put out]. They are well-crafted pop songs, and I’m proud of them.

Our community doesn’t seem to support musical queer artists. It’s usually the artist that [makes it big while still in the closet and later] comes out as queer who keeps their fan base, and adds on to it. I think of all the great creators in our community at large, who are not creating and expressing due to not being heard or seen. I don’t blame the Ru girls… I question the Pride booking promoters.

I have been fortunate to travel with my music, and there will be more [of it]. I needed to take a break this year. I was working on a project and got ill… but there is more coming! I’ll keep pushing that door so I can leave it more open for the next [artist to come]. I feel as a trans / queer artist, it is my responsibility.

Didn’t you have a radio show on SiriusXM at one point?

I loved doing radio! I was a weekly guest on “The Morning Jolt” with Larry Flick on the now defunct OUTQ station. I learned a lot, and I loved it. I plan on revisiting radio!

Radio definitely needs more Dina! Back to nightlife: you’ve probably seen it all, it as far as that world goes. Do you have a go-to Craziest Story?

Hmmmm… lol, so many! And it always seems to get crazier. I gotta get back to you on that. The book will be good!

I will so read that!

I am so going to write it!

Well, I have my own Favorite Dina Moment. You presented me my very first ever GLAM award for this very blog, in 2016! You took forever to read my name on the envelope, and kept stalling. The whole room was enthralled and in stitches, but my stomach was turning over in the wings because I was a nervous wreck, lol! It turned out to be a moment, though.

Lol, “over in the wings!” See, that’s where my talent, if you will, comes in. I love the tease of a live audience: the give, the take, the pause… and the drinks don’t hurt! The Glammys, incidentally… some of my best memories are of those nights. I’m happy you won!

These days, you’re quite visible in the “T-Girl” or “TS” scene here in NYC, where many other trans women perform or host. Unlike the factions of city nightlife we identify as queer, the clientele of T-Girl parties are mostly straight guys who have a preferred attraction to trans women. Does the idea of being possibly fetishized in that scene concern you?

Am I concerned? Absolutely not. I’m sure I have been many men’s fetish in one way or another. I’m a sexual being myself; I have fetishes and curiosities. Don’t we all? I’m sex-positive. I don’t care what floats your boat.

What I am troubled by is the stigma that men who are attracted to trans women are homosexual men. It’s not only false, but dangerous at the same time. That stigma sends a message which invalidates trans women as women, and further adds to the false sense that trans women are disposable… which leads to violence.

The continuing violence is terrible, but at least the problem is finally being addressed and getting some visibility in the media. On a lighter note: the show POSE returned for its strong second season premiere the other night, and that of course stars several trans actresses–many of whom came up in New York nightlife. Will we ever see Dina in a cameo on there?

Who knows? I don’t believe so… I don’t see where I would fit, as of now. And I wouldn’t do something just to do it, either.

So, you were saying in the beginning that your Pride Month this year will be unique. Starting this Friday, you’ll be at the Chelsea Wine Vault for some weekends, in a series of events (no cover charge!) called “Legends of Gay Pride.”

I went in a different direction this year. I will be the emcee for a few Fridays, and my performance night will be Friday, June 28th–Pride Weekend. I’m looking forward to it! It’s a great lineup for the month: Princess Diandra, Brita Filter, Laith Ashley, DJ Sammy Jo, DJ Tennessee, and more. All very talented and loved.

And on Sunday, June 23rd, you’ll be at the Pride edition of Ladyfag’s Battle Hymn, also in Chelsea. Will you be performing, or just turning fierce looks and meeting the children as a hostess?

Not performing, but [otherwise] doing all of the above. 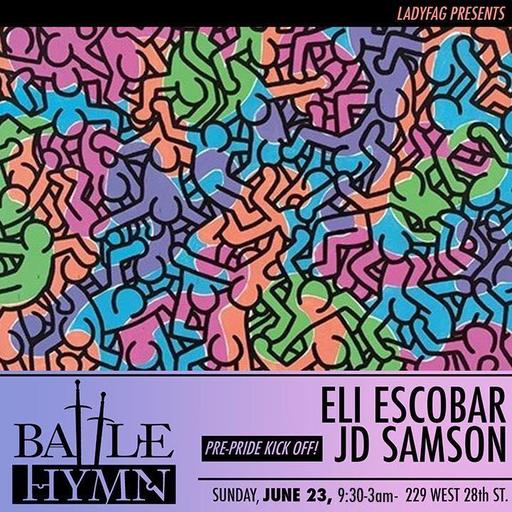 We can’t wait to see you at these gigs this month! So, in closing: what do you hope people remember or reflect on as they celebrate this World Pride?

It’s a march, not a parade! Remember all the activists that made this day possible, and spend your money on corporations that stand with us. Have fun. And this a beginning, not an end, to the greater movement of freedom for us all.

Thanks so much, Dina!