She’s thick, tall, hairy, beat for the gods, funny as hell and an artist first and foremost. Super new to nightlife and already a star in Brooklyn, it’s just a matter of time before we all find ourselves going gaga googoo for Baby Love!

Thotyssey: Hey there, Baby! How was Saturday’s brunch show with Blake Deadly at the Cowgirl Seahorse?

Baby Love: Brunch was so much fun! We did a non-stop two hours of shows. I brought costume changes, wig changes, and mixes (cuz I’m a psycho)—but it was honestly so fun.

So, you’re a day dragger now!

Generally, I like day drag. Mainly, I like being able to go to sleep at a human hour after being in drag, haha. Saturday was a liiiittle challenging though, because I was out late at a new party I helped launch at the Vault on Friday night.

We’ll get to that one in a minute! We’re officially in Pride month now… are you looking forward to the massive scale queerness that’s about to flood over us, or is it at least a tad overwhelming to you?

I’m always down for some massive scale queerness! Haha! But I saw that NYC is expecting something like three million or more visitors for Pride!? That’s kind of insane… but the idea of queer people flooding any space gives me a little tingle.

Lol, indeed! So, your drag seems to have this very editorial flair to it, at least on social media. Do you have a background as a designer / visual artist as well as a performing artist?

Thank you! And lol, imagine, I’m just a garbage heap in person. And yeah! I’ve been drawing and painting since I was young. I studied and practiced fine art in college. It’s definitely heavily influenced my drag. I have some theater background–I was Frankfurter in my college’s live production of Rocky Horror for four years, and that’s kinda what started this whole thing.

Rocky Horror has birthed so many queens! Where are you from originally?

So you’ve been bridge-and-tunneling it for a minute now, I’m guessing! Where were your first hangout spots here?

Well, I didn’t really experience NYC nightlife until… two years ago? But when I was in high school, I would come into the city and go to art museums and, like, scavenge the clearance racks in the basement of that Urban Outfitters on 14th and 6th! I was always surprised by the amount of ANTM contestants I saw there doing the same thing.

I can picture that!

So, how did Baby get born?

I had wanted to do drag for a very long time, but never really thought I would have the courage to. Last year, one of my good friends from high school passed away, and it made me realize that I needed to get over the fear and start pursuing my dreams. The character is really born out of darkness (dun-dun-DUN…). I wanted to create a vehicle that helped me flip the script on these self-deprecating narratives that played over and over in my head.

That’s very inspiring! Are you named after the classic Supremes song?

Haha, yes! I LOOOOVE that era of music and The Supremes. I also thought it’d be kinda fun for a giant line-backer in a wig to be like, “Ooh hi, I’m Baby, hehehehe.”

Ha! How would you describe both your aesthetic and performing style as a queen?

My aesthetic? Hmm… gorgeous? Lol, no, I’d say “fashionable.” But, like … trendy-fashionable. Not like, “FAH-SHUN.” I’m not the FAH-SHUN girl….yet! My performance style is upbeat and sardonic. Even when I’m performing something “serious,” I’m always kinda metaphorically rolling my eyes.

That’s good! All drag is art, of course, but some queens these days seem to take themselves a bit too seriously!

Haha, yeah. I mean, don’t get me wrong… I love a girl who’s just FEEELING like an orchid, and feeling herself.

Do you have a favorite number to do right now?

Fun-fact—I haven’t repeated a number yet! For some reason, I made a pact that I would keep trying different numbers, and haven’t stopped. I will say, though… performing “All By Myself” at Harajuku’s Met Gayla was def one of my favorites.

So, Brooklyn bar The Rosemont and it’s associated performers and staffers were the big winners of this year’s Brooklyn Nightlife Awards. What are your thoughts about that, and what do you think it is that makes The Rosemont so vital to the scene today?

The Rosemontelito!! My home, haha! I think [general manager] Troy and the queens and the DJs and bartenders that have worked there on a weekly basis have helped create the cool, young, edgy vibe that the kids flock to. As the queens’ and DJs’ popularity grow, so does the bar’s popularity. There’s also a strong sense of family there. I get comments a lot about the “Rosemont Girls”—it’s a real thing. We’re a weird little family that does drag you can’t see anywhere else, at a funky dive bar.

You’ve hosted a few shows there now, starting with “Baby Shower” back in March. Will you be headlining another show there soon?

And as you mentioned earlier, you debuted a new party at The Vault.

It was amazing! I had never been there, and was nervous about the turnout based on what some of the girls were telling me. When I showed up, I was delighted to see it packed! And as a queen—HUNNIE— I got on the mic, and people listened… DRUNK people. I was astonished! DJs P_A_T and Jon Ali were the perfect duo to take the leap with. We did a Kim Petras-themed night, where I gave, like, mini-concert shows. It was so much fucking fun, I’m looking forward to the next one in July.

And this week, you’ll be at one of Brooklyn’s favorite monthlies: Straight Acting at Metropolitan Bar! Will this be your debut at that night?

It is! OMG, I’ve been following this party forever… like, I’m such a weird fan girl of all of these queens. But don’t tell them, or they’ll think I’m weird.

Your secrets safe with us! 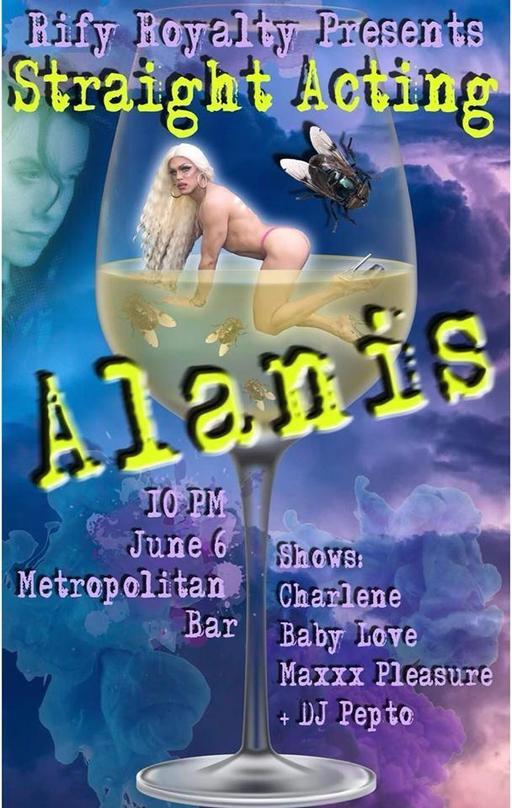 Gigs on gigs for Pride month, some editorial work, potential trips to Miami and Chicago…. and the debut of the official Charlene fan club (I’m the president of this chapter).

Your plate is full! Well, thanks for finding time for us today!

Of course, thank YOU!

In closing: as a newer queen of Brooklyn, what would your best advice be for a Brand New Brooklyn Bitch wanting to break into the scene?

Advice to be a BNBB, hmmm… I’d say, first, you better be doing it for the right reasons, not for “fame.” If Drag Race wasn’t on TV, would you still be interested? Second, have respect for queens who have paved the way for you: listen to them, support them, learn from them. Third, be yourself… unless you’re an asshole, then pretend to be someone else.

Sage advice for all of us, actually! Have a great summer, Baby!