This hairstylist and karaoke enthusiast realized her full drag fantasy fairly recently, and is currently the host of Jersey City’s only queer karaoke night. On the eve of her bittersweet NYC hosting debut — a benefit for a fallen member of her Boots & Saddle bar family — Miss Kia Karr is ready to ride.

Thotyssey: Hello Miss Kia, how are you today?

Kia Karr: Well hello, hello, hello! I’m good, super excited to be here with you…  it’s like, I’ve waited all my life, lol!

Gurl, the time is right now for Kia to shine! You’ve started performing and appearing more often in drag this past year, but for the most part you are a career hairstylist, right?

Yes I am… I do hair down by Wall Street. I’ve been down there for nine and a half years. This year has definitely been more of a break out year for me as Kia Karr. I’ve been hosting my own karaoke show across the border — Iol, I mean, “river.” My husband is literally across the border at the moment.

That right, you’re a Mrs.! Are you a native New Yorker or New Jerseyite?

I met you years ago, when we were regulars at the dearly departed Boots & Saddle (both the original on Christopher Street and its nearby replacement) in the West Village… what was it about that place and its family of regulars and staff that was so special, do you think?

I remember that was the first place that I felt was different than every other bar in the West Village; it was its own, and I was looking for a place I could be myself. So I found karaoke there with Victoria Chase, and every time she would say, “welcome home.” And that’s what it became, home… and was until its end. I met the most amazing down-to-earth people there, and I’m still friends with them.

I still think Victoria is the greatest karaoke host in NYC! You’re in Jersey, so I’m allowed to say that to you.

Lol, I’ll forgive you this time! Truth be told, she taught me everything I know. I still go to her shows in NYC; I do love and appreciate everything she has done for me.

You were such a karaoke all-star! And still are. Were you always a singer?

For the most part. I actually moved here the first time in 2004 to be a Broadway star. Then after a few auditions, I realized that either you have to be part of the union, or if you weren’t then you had to have a long resume of things you’ve done. Problem was, I did a lot of things that had nothing to do with Broadway at 22.

What made you decide to take the leap and do drag yourself?

I had a best friend who had lost a venue for their birthday 3 years ago, and they asked me if I can help. So of course I did; my friend owned a bar next to the salon I worked at, so I got him in there. His one request was for all his best friends to dress in drag — so I figured, why not? After I did, a lot of people asked me for me, and that was when Kia Karr started.

There’s coincidentally a similarly named queen in NYC, Kizha Carr… has she come for you at all?

Lol! Actually, not at all. I reached out to her when I was first starting out, since someone had informed me [of the name similarities] and I told her that my tag name was literally “I will key your car.” But she never responded… I just figured it was because she truly has nothing to worry about. She’s an amazing queen in her own right… some day I hope to do a duo show with her. She’s a singer, and Broadway star.

These days, you are almost exclusively a karaoke queen. You got your start doing that weekly at a small gay bar called The Royal in Jersey City. That seemed like a cute, much needed queer addition to the area, and your night was popular there… but the The Royal kind of quickly fizzled out. What happened?

They labeled themselves as the first gay bar in Jersey City… then things started to go sour once the only gay owner who gave me the opportunity to be there sold his share. All the people who were part of our community started getting fired or quitting, and I couldn’t be a part of a place that doesn’t support all of us. So I told them I had to end my night on Halloween, even though they wanted me to continue — I already established a following.

Tell us more about Six26 in Jersey, home of your latest karaoke night (“Karaoke Kiki,” Wednesdays at 8pm). This is a very new venue, and seems to be popular already!

It’s actually amazing. They totally support the community, and they have a different theme every night that supports everything we enjoy. It’s a half a block away from the train from NY to Jersey (PATH train — no one knows it) And it’s also the only bar who not only supports us, but finally gave us a place with a rooftop. They show RuPaul’s Drag Race [on Thursdays this season], and Fridays they give you drag queens galore with Miss Stella Luna.

What’s the key to a successful karaoke night?

As cliche as it sounds: just be you. The reason why it works is because I always bring in a “co-hoe,” so I can walk around and actually get to know my crowd. I don’t try to do it all by myself — it takes a village, or maybe just I do. I do a different theme weekly, so that draws in different crowds as well. Also, we play a lot of games in between — so it doesn’t become a bunch of ballads, as most karaokes do. When I started as a karaoke patron, I always thought of “what if I did drag and did this, so it’ll be different?” 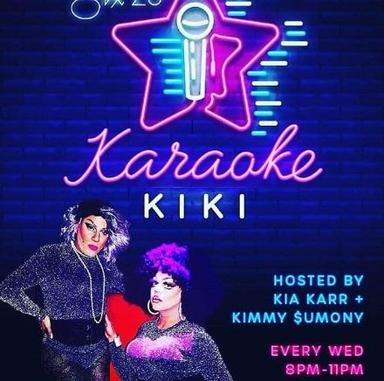 Now, on a much sadder note… last week we attended the funeral of someone we both knew from the Boots & Saddle days… Alvin Rosas, who was periodically both a regular and an employee there… a young, vibrant guy, full of positive energy. It’s been devastating for all of us.

I met Alvin my first time in NYC, at Stonewall College Nights. Picture it: NYC 2004. He met up with the one best friend I moved here with… they started dating, and he ended up moving to Jersey City into our same building. He was 18 and beautiful — he had long, shoulder-length curly hair.

Then my best friend moved back to Massachusetts and passed away young. Alvin came to the funeral. But then, like, 6 years later he truly met the love of his life in Adan. And that was the moment I met him all over again, because I met a new spirit, a new life, a new love. And someone who became the most annoying little brother anyone can ask for. I miss that.

I didn’t know that you had such s long history with him.  So now, just about a year and a month after the abrupt closing of Boots, many of us (regulars, employees, Boots show queens) are coming together once again to celebrate his life at nearby Pieces Bar, where “Alvin’s Night” will be this Saturday, April 6th (8pm).  Kia will be hosting, Thotyssey will be producing, and many queens who performed at Boots will be on the stage donating their time, talent and tips to Alvin’s family, helping them recover from the coasts of the funeral and showing them how loved he was.

It’s a full circle moment. All the girls I used to go and watch and learn from are going to be there, and I can’t wait to see them. And the fact that I’m hosting is just a testament to how far I’ve come. It’s truly bittersweet. I’m gonna miss Alvin Rosas, and this is literally the last thing I can do to give back to him and his family. But truthfully, being able to do this with all the girls I’ve admired and who have helped me along the way is all I can ever ask for — to host a show about celebrating his life and keeping it upbeat and thoughtful, and happy, with all my sisters. I know for a fact this is going to be a night no one should miss. Not only will I be singing and dancing , but so will all these other girls who I love and respect. I know its gonna be one of the best nights Pieces will ever have. I just hope they are ready for you and I to finally combine our forces.  I’m truly grateful and thankful you have asked me to be a part of this extremely beneficial show.

We’re  so lucky to have you!

I’ll be working for Jersey City Hudson Pride Community Center. They have asked me to sing the national anthem on August 1st, For the JC Pride kickoff. Also, we are working on an actual production of RENT with a POSE-infused storyline. It will outline all of our lives, while also giving homage to the fact that this is Stonewall’s 50th year since its triumphant beginnings — and now it’s a national landmark.

Very impressive! Okay, in closing: what song drives you crazy at karaoke?

I think the fact that I always sing Adele’s “One and Only” is because people don’t know I sing it to my parents. The song drives me crazy, partly because it reminds me of my past — but also because with my husband David, it’s no longer my future. I’m literally at a point in my life where if I can live this day, today, for the rest if my life, I’d be golden. I wouldn’t change a thing, nor the people who have been in it from Day One until Day Now.